Co-authored by Victor Magnus in 2010. Original article can be found on VampireWorld.TV.

The remarkable Long Black Veil or "LBV" events truly hold a unique place in the history of New York City's nightlife. LBV began in 1997 as "Long Black Veil & The Vampyre Lounge" on the second Wednesday of each month at the legendary MOTHER nightclub on 14th and Washington Streets in New York City's meat-packing district. Chi Chi Valenti, also known as 'The Empress', one of the owners of MOTHER, and her life mate, the famous DJ Johnny Dynell, conceived and named the event after hearing the mournful song "Long Black Veil." 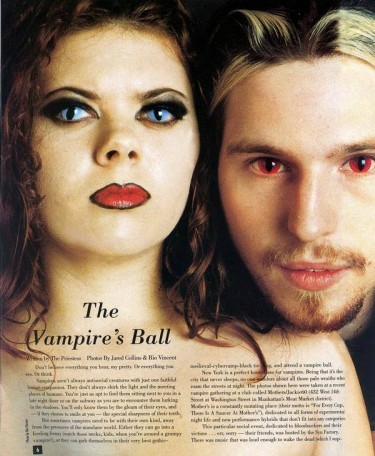 Clipping from Tattoo Savage 1997 with Lucianna and Father Sebastiaan

The song "Long Black Veil" was written in the late 1950s by Nashville songwriters Marijohn Wilkin and Danny Dill, who were inspired by newspaper accounts of two non-related events; the real life murder case of a New Jersey priest and reports of a mysterious woman in a black veil who regularly visited silent movies star Rudolph Valentino's grave. Primarily associated with Johnny Cash, the song has also been covered by many artists including Lefty Frizell (the original singer), The Band, Joan Baez, Nick Cave, and the Dave Mathews Band. However, it was the 1995 version of the song recorded by the Celtic/Irish traditional music group The Chieftains featuring Mick Jagger's vocals, which proved to be the inspiration for the name. LBV was intended to be a uniquely themed night where "fangs were preferred in the Vampyre Lounge."

At a meeting at MOTHER in August 1996, Father Sebastian, prominent leader of the Vampyre community in New York City and founder of the fang-making and events producing company named Sabretooth, was hired by Chi Chi & Johnny as their "vampyre son" to host this newly conceived event for their club. After hearing of his success with "The Vampyre Ball" events at the Coney Island High, Limelight, and The Bank nightclubs earlier that year, Chi Chi & Johnny invited Father Sebastiaan to expand his unique concept at their nightlife mecca. 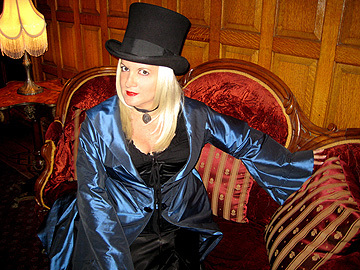 Impressed by already existing and popular MOTHER events such as Jackie 60 (Tuesdays) and Click+ Drag (Saturdays), Father Sebastiaan insisted that the same "template" of these other events also be used for LBV. This template for success relied on décor, an exclusive door policy with a strict dress code, stage performances every week, and the magickal energies of the MOTHER venue itself. DJs Ian Fford, Lestat, and Johanna Constantine presided over the early dance floors. Initially, the main attendees were the clients of Sebastiaan and this core element formed the foundation of what became known as "Clan Sabretooth." 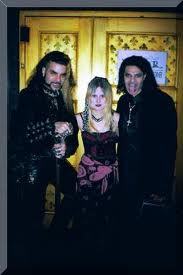 VAMPYRES OUTSIDE OF MOTHER CIRCA 1997

In less than a year LBV's success demanded that it become a weekly Sunday event at MOTHER in late 1997, along with the inclusion of host and doorman or "gatekeeper" Father Vincent under the name temporary Fang Club Gotham. This short-lived name change was intended to unite NYC's vampire subculture with the Los Angeles club known as Fang Club in Hollywood, owned by Jack Dean Strauss. 1997 also marked the year that DJ Jason of Alchemy became the host DJ in the Vampyre Lounge within LBV held in Versailles room of MOTHER. 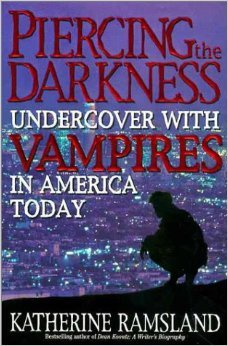 Also in 1997, Anne Rice's biographer Katherine Ramsland contacted Father Sebastiaan and asked him to serve as a consultant for a book she was writing entitled "Piercing the Darkness: Undercover with Vampires in America Today." Ramsland's intention was to follow in the last known footsteps of investigative reporter Susan Walsh, who disappeared around the same time as the historic Vampyre Ball at the Limelight in July 1996. A release party for the book was held at LBV in 1998, where Ms. Ramsland read excerpts and signed copies for the attendees.

1998 also saw the release of the first printed edition of "Vampyre Almanac" and the original Legacy Ankh pendants. These Ankhs were sold around the world through alternative retail outlets such as Hot Topic. The worldwide release of Vampyre Almanac and Piercing the Darkness brought international attention to the culture and to the name "Long Black Veil." That year LBV took up its traditional place on Thursday evenings at MOTHER, which it remained until the final days of the club in June 2000.

During this "golden age" of the vampyre scene in Gotham, many legendary events such as 1999's Endless Night Festival, the annual Lost Boys' Beach Party, The Bloodletter's Valentine's Ball and the fetish/body arts Xorvia events were spawned. Guests who entered the gates of MOTHER included celebrities such as Blondie and world renowned fangsmiths including Dnash and Maven of Dark Awakenings. 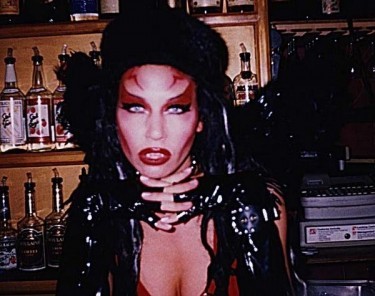 ALCHEMISTRESS AMBROSIA: INVENTOR OF THE BLOODBATH

The most important legacy of LBV is that it was at that event that the original "vampyre code of ethics" was introduced. Inspired by the structure employed by the Fetish/BDSM subcultures and renaissance faire etiquette, this code became known as "The Black Veil". Originally developed as the house rules of LBV, this code of ethics is now accepted worldwide and is the standard code of vampyre/vampire subcultures.

"The Black Veil" code was revised in 2002 by Michelle Belanger of House Kheperu from Ohio, and it has even found its way into mainstream popular culture in episodes of "C.S.I. Las Vegas" and mentioned as a "sacred script" by Don Henrie on the Sci-Fi Channel's reality show "Mad, Mad House."

Another lasting legacy of LBV is the Bloodbath cocktail. Created by the resident bartending mixologist of LBV, the Alchemistress Ambrosia, the Bloodbath is now the most popular drink enjoyed by vampyre subculture all around the world. 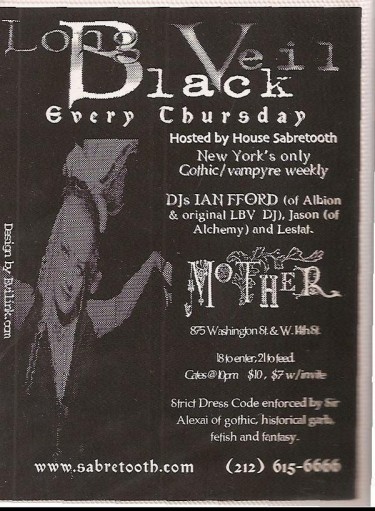 AN ORIGINAL FLYER FROM MOTHER AND LONG BLACK VEIL IN 1998

With the closing of MOTHER in the year 2000, Father Sebastiaan chose to continue the event by relocating to True nightclub on West 23rd Street, near Broadway in Manhattan. LBV remained there for two more years until he decided to end this event in the spring of 2002 in favor of throwing future reunion parties instead.

LBV had a lasting impression and it resonated in the minds of many in vampyre subcultures throughout the Gotham Halo (New York City area), North America, and the world.

Teaming up with a NYC events promoter Master Steelow (who began his career as a go-go boy at Long Black Veil) Father Sebastiaan promoted a series of reunion LBV parties at Flamingo East nightclub on 2nd Avenue and 14th Street in Manhattan starting in the fall of 2002. When Sebastiaan moved to Europe in the fall of 2002, he hosted the last LBV reunion for almost a year.

FATHER SEBASTIAAN AND DON HENRIE IN 2004 AT LBV

In October 2003, Father Sebastiaan returned to Gotham for the release of his special edition anthology book "V", which included the Black Veil code and the Strigoi Vii edition of Michelle Belanger's Vampyre Codex. This long awaited LBV reunion attracted a number of well known guests to Master Steelow's Flesh Theatre, such as High Priest Peter Gilmore and Magistra Peggy Nadrima, the successors to Anton LaVey's and Magistra Blanche Barton's positions as the High Priest and Priestess of the notorious Church of Satan.

Again, LBV proved itself as a gathering that the vampyre community desired and missed. Responding to this outpouring of support Father Sebastian decided to once again join with Master Steelow to create another LBV evening at Rare nightclub (just down the block from the original MOTHER venue, thereby returning LBV to its roots) on April 19th, 2004. This night LBV hosted by Michelle Belanger of House Kheperu and Don Henrie, turned out to be by far the biggest Vampyre event in years.

Six months later, at yet another LBV, at Rare nightclub, in October 2004, Father Sebastiaan, announced that LBV would be coming back regularly as "Long Black Veil, The Vampyre Ball of New York," a quarterly event starting around Valentine's Day 2005! 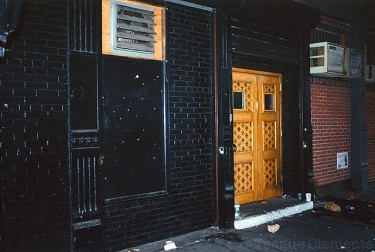 THE ENTRANCE OF MOTHER AT W 14TH ST. AND WASHINGTON ST.

Throughout LBV's history, knowledge of the event has spread into mainstream consciousness, through various media outlets such as Glamour, Cosmopolitan, In-Style, The New York Times, Time Out New York, the book Piercing the Darkness, and on television's History Channel, The Learning Channel, Travel Channel, and many others. Even with this exposure, LBV has managed to maintain its true underground integrity through strict media policies against exploitation and sensationalism of the Vampyre, fetish and gothic communities.

Long Black Veil has inspired many other NYC events including Court of Lazarus, Black Abbey, Black Invokation, Hidden Shadow's Realm of Darkness, The Court of Gotham, and the many noir havens throughout the world including Black Atlantis (Atlanta), Black Sunset (Miami), Black Trillium (Toronto), Black Xion (Amsterdam), and many others.

Father Sebastiaan and the Legacy team will continue working hard to provide first class events for the Vampyre/Vampire community under the veil of Endless Night / Vampire World, by keeping standards high and providing this dark subculture many forms of quality events and media for many years to come.

ABOUT THE AUTHOR: Victor Magnus an "ancient" member of Sabretooth Clan (he got his fangs in 1995) and has been an active member on and off over the years. Today he is the GateKeeper of the Endless Night Vampire Ball events in New York and New Orleans.