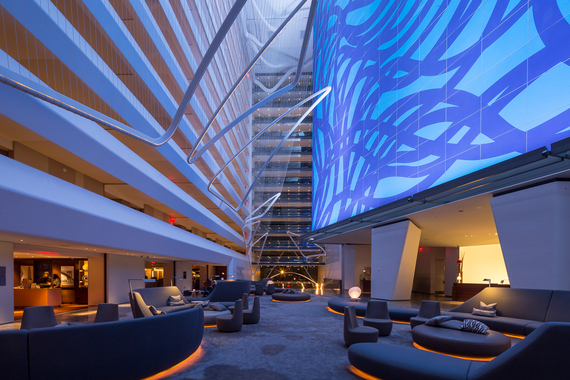 We've all heard the buzz about Lower Manhattan and how it's the happening neighborhood of the moment. In fact, the saturation of news quite nearly put me off visiting what the marketers of the neighborhood call the "new downtown." Goodbye Village, my old neighborhood, you're so old hat. Battery Park is where it is. OK, so I went with a preconceived notion of the energy being a bit disingenuous. But I was wrong.

Energy is here, especially among young families, who have taken to the wide boulevards, open spaces, parks, mall-like shopping complexes, and sprawling suburban-sized health clubs. Life here is, well, simply easier than other places in the city. It's cleaner too since this area is where much of Manhattan's development has taken place in recent years.

I installed myself at Conrad New York, a Hilton property located on North End Avenue, a quiet block steps from the World Trade Center. The Conrad's style is The Jetsons meets Jeff Koons. Sleek, modern, fun -- this hotel is all about design, space and comfort. And in stark contrast to many other self-conscious downtown properties, the staff here is warm, friendly and unpretentious. And that's saying a lot considering they are surrounded by museum-quality modern art, including Sol LeWitt's 100-foot tall Loop Doopy (Blue and Purple) that soars above the atrium lobby.

All rooms are suites, meaning that no matter what room you book, you're going to have some space. Most, like the one I stayed which topped 400 square feet, are rather spacious rooms by New York standards. Rooms have built-ins, a wet bar, Japanese-style glass panels that separate the roomy rain shower from the bedroom. The suites themselves are cocoons of calm. No street noise and, unlike so many mod hotels, this one has insulation to keep you from overhearing neighbors. The connecting hallways offer unobstructed views across the Hudson River. I never hesitated to linger as I made our way out to the (fast) elevators from our 14th floor perch.

My nine-year-old daughter loved the high tech elements, like remote controlled lighting systems and pop-up plugs. I too admired some mod features, like the digital clock in the gym that spelled out the time as in "It Is Now Seven Fifteen."

The Conrad is situated in prime turf. It's hard to image better views of the Statue of Liberty and Ellis Island than from the jogging path that weaves past the Hudson River right out front. And step across the street and you're at Brookfield Place, a high-end mall experience with stores like Hermes and Diane Von Furstenberg and a busy Drybar festooned with yellow roses, where we treated ourselves blowouts.

Perhaps the very best reason to visit this corner of Manhattan is to pay tribute to the Americans who lost their lives in the terrorist attacks in 2001. The new World Trade Center offers a sky-high observatory, but even a walk through the white marble corridors will give visitors pause, an environment which to reflect on the loss. Walking through the eight-acre memorial park and peer into the dual reflecting ponds etched with the names of the fallen is heady stuff. And the Memorial Museum, located precisely where the attacks took place, ripe with archeological remnants and context for the attacks in which nearly 3,000 people lost their lives, is steps away.

This neighborhood of Battery Park City, mostly created from landfill exhumed as the original Twin Towers were being built in the 1970s, stands as an endearing testament to a city that has always decided to build upon the past and look forward to the future.