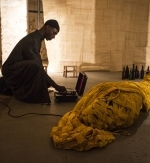 New York summer's offer plenty. The streets are quieter as the really lucky retreat to their weekend cottages and the students have left town for their gap year. That leaves the rest of us to find joys in the lengthened days and beautiful weather.

From a show based around the Egyptian Book of the Dead on Governor's Island o full moon watching from a rooftop with Tecate; there is no shortage of diversions.

Lower Manhattan Cultural Council sponsors its annual River to River Festival. In the basement of the Arts Center, choreographer Kaneza Schall and her team draw inspiration from the Egyptian Book of the Dead, using analog projection, sound and dance to animate a series of burial vignettes. It's a magical show; the three male dancers looking like Temple Priests, eerie and powerful in the lighting of the tombs. There are real surprises and I won't spoil the fun, but it's a terrific piece and worth the jaunt over on the ferry.

I have no father to spend Father's Day with so I joined a live sing along with the movie of Fiddler on the Roof at the Jewish Heritage Museum. Topol as Tevya is the father to three daughters and not a bad substitute for my own Pop. A couple of performers, one fiddler and an MC lead the show, getting the audience revved up for the songs. The screen presents the lyrics and though it is not Rocky Horror Show crazy, there is real enthusiasm and joy. I said to my friend that I may not have anything in common with the other members of the audience, beyond the love of the music of this show and of course, the traditions that many of us were raised with.

The special guest stars of the event were two of the original performers from the film, Neva Small who played Chava (she runs away with the gentile) and Rosalind Harris who as Tzeiitel, escaped the clutches of the butcher, Lazar Wolf. I met Leonard Frey, who played Teitel the tailor, at an art show years ago. He blew upwards on my mother's old silver fox coat, proving to us both that it was real. Ironically, his other big role was in The Boys in the Band and he was great.

When the villagers of Anatevka are forced to pack up and leave, we all feel the ache. We have only to look at the migration of Jews out of France and Syrians, Somalia, Afghanistan and others today to see how current this Sholem Aleichem story still is.

After a long and lingering stroll up the Hudson, I stopped at La Mama to see a production called I'm Bleeding All Over the Place: A Living Tour. Avant garde theatre is special and this piece conceived and directed by Brooke O'Harra (co-founder of the OBIE Award-winning group Two-Headed Calf is challenging. The actors face off with the audience by having encounters and at times one isn't sure who the real performer is. They make good use of the space, having the audience follow the performers around, creating both a sense of immersion and distance.

For the Sunday finale, there is of course, the full moon.

Please see: r LMCC and all events on river to river. http://lmcc.net/news/river-river-2016-live/
www.kulturfestnyc.org for the Folksbeine Festival.

Entertainment Fiddler On The Roof