Harlow has been home for a little over a week. At this point, I thought I would be tearing my hair out and trying to find the receipt to return her, but so far, having a newborn in the house has been... dare I say it?

It's interesting to think back to when we first brought Mazzy home and try to understand what we thought was so challenging about it.

Newborns eat, poop and sleep. Mostly, they sleep. But more importantly, newborns are your one-way ticket to staying home in your PJs while delegating toddler-care to your spouse, with no guilt whatsoever!

Here are six reasons newborns are a piece of cake the second time around...

1. You are already used to living on very little sleep.
When you have your first child, the lack of sleep is pretty shocking. You do not know true exhaustion until you become a parent. Not only are you up all night but you can't sleep in to make up for it. But, by the time your second child rolls in, you are very familiar with walking zombie-like to your kitchen and pouring protein powder into the coffee machine by accident. You already know exactly what it feels like to stand in your shower and try to remember whether you already washed your hair. You've been doing that for the past two years! Sure, tending to a newborn throughout the night is not ideal, but it's not nearly as life-changing as it was the first time.

2. If you are breastfeeding, you already know how to do it.
Almost all of the stress I felt when I first had Mazzy was caught up in whether or not I was breastfeeding correctly. At the hospital, I struggled with getting her to latch on and had to actively fight the nurses who were trying to get me to feed her formula because (and I quote), she was "STARVING." Nothing like feeling like a failure before you even bring the baby home.

3. You already know breastfeeding hurts like HELL.
Remember the lactation specialist who said you were doing it wrong if it was painful? Well, as a second-time mom, you now know that is total BULLSH*T. Breastfeeding hurts. That's a fact. At some point, the part of your brain that tells you to save your boob from the gnashing piranha shuts down, the nerve endings die and breastfeeding becomes somewhat mindless -- but that doesn't happen until at least a month in. My point is -- breastfeeding is a lot easier when you have realistic expectations.

SIDENOTE: I do not know a single man who would be able to withstand the pain of breastfeeding.

4. You are not afraid to break the baby.
I made Mike give Mazzy her first bath because I was so scared of drowning her. I didn't touch the umbilical cord once because I didn't want her to bleed out from the belly button. I barely touched the top of her head because I didn't want to indent her skull. With Harlow, it's not like I'm tossing her around like a football, but I'm not losing my mind when my husband pretends to fake a pass either.

5. You know why the baby is crying and it's not because you are its mother.
The sound of Harlow crying doesn't fill me with panic like Mazzy's crying once did. It's not that I've turned into a heartless monster, it's just that I know newborns stop crying once the bath is over, the diaper is changed, the gas passes, etc. She is not crying because she left the womb, looked into my eyes and thought -- Oh, crap. This chick has no idea what she's doing.

6. You now know the true meaning of "CHALLENGE."
The word "challenging" doesn't describe your newborn. It fits another person wreaking havoc upon your house. That person is your toddler. That tantrum-throwing, goldfish-smashing, bookshelf-climbing, Calliou-obsessed little person who makes you want to hug her and throw her out a window all at once.

Basically, newborns are only challenging to people who have never taken care of anyone but themselves. (Not including newborns with colic; I won't pretend to know the difficulties of dealing with that one.)

So, right now, I'm taking advantage of Harlow's sleepy phase, wearing my PJs with pride, being thankful a doctor has ordered me to stay out of the gym for six weeks, and happily pawning Mazzy off on Mike.

I know this won't last. I haven't even tried to take Harlow out of the house yet, let alone go anywhere with the both of them. And I know, Harlow will one day turn into a toddler too.

But maybe by that time, I can let Mazzy deal with her. 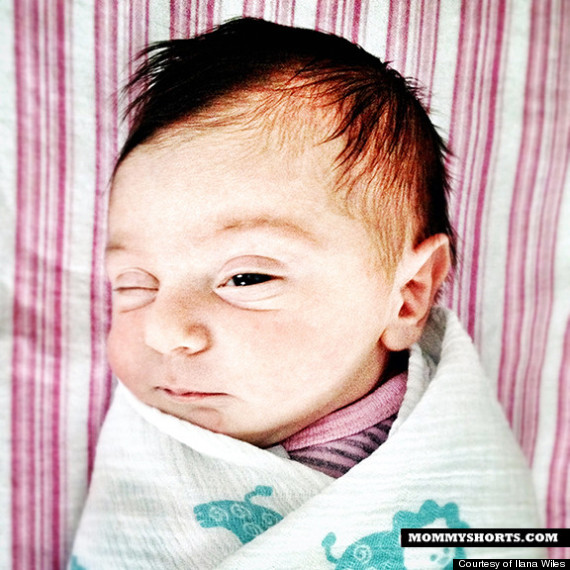 More:
ToddlersParentsparents-babiessecond babyparents newborns
Newsletter Sign Up
Raise the kind of person you'd like to know
Subscribe to our parenting newsletter.
Successfully Subscribed!
Realness delivered to your inbox

Founder of MommyShorts.com, author, and mom of two.