Now, analysts suggest that women are irrational in insisting on mammography. Some are confused and angry. The problem is so serious, in fact, that some women are addicted, choosing the comforts of reassurance over reality. Doctors who recommend the procedure have their heads in the sand, ignoring hard facts.

If women and the physicians who care for them were reasonable, they'd take note of the new findings and act accordingly, right?

Rather, I'm skeptical of the task force findings on mammography as it's practiced in 2009. I'm concerned, further, that this new soft thread in the discussion is a loose and dangerous one, adding insult to injury and leaving some quite sensible women defenseless in their ambition to take care of themselves and their bodies.

Drawing women's emotions into the matter is a hit below the belt, tagging a considered discussion of the matter as hysteria.

As an oncologist, I know well that breast cancer tends to be most aggressive in younger women. Fast-growing tumors tear through this controversy because they're hardest to detect on mammograms before they've spread. This type of breast cancer, sometimes "triple negative," distinguishes itself by behaving in some respects like a leukemia, with malignant cells traveling in the blood to bone marrow, liver and lungs. I agree with critics and advocates who say we need better tools for discovery and treatment of that type of disease.

But most breast cancers aren't of this sort. Even in young women, the majority of tumors are curable if they're found and treated early. Between 1980 and 2005, the number of U.S. women who underwent screening mammography rose steadily. This change in medical practice paralleled a marked improvement in survival among women found to have the disease.

The graph in Figure 1, retrieved from the National Cancer Institute (NCI)-associated SEER (Surveillance, Epidemiology and End Results) database, demonstrates that among U.S. women with breast cancer, the proportion surviving for 5 years or longer increased from approximately 75% in 1975 to around 90% in 2001 (the last year to which this particular data set extends). 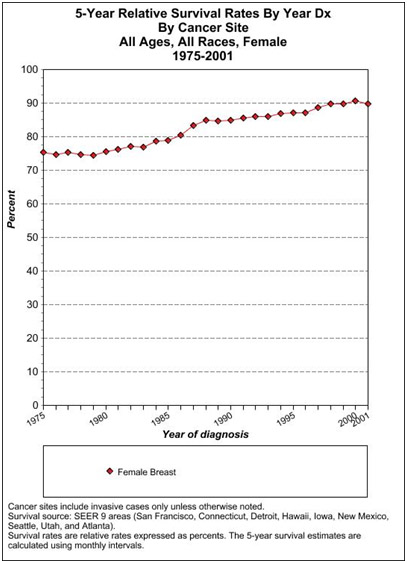 Next, let's look at trends in mortality (deaths) among women who have breast cancer. For this particular statistic, the system allows us to focus on women less than 50 years old: 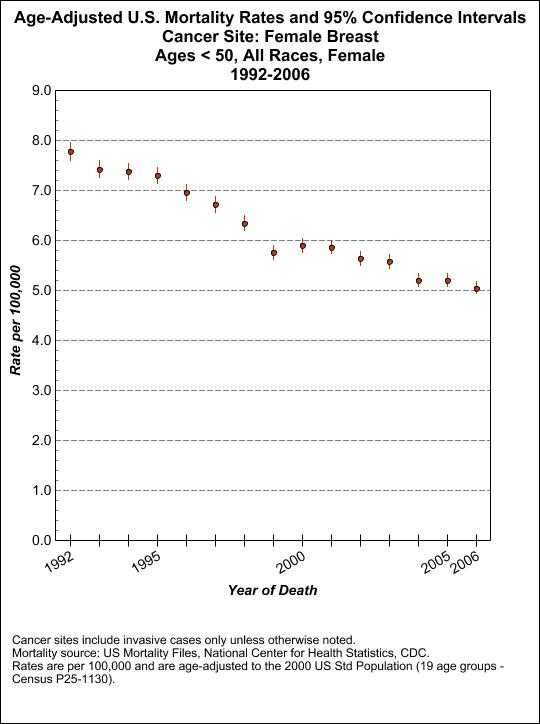 These data are powerful, clear and consistent.

For patients with breast cancer less than 50 years in age, mortality fell from roughly 7.8 to 5 percent between 1992 and 2006. You might spin that story into a decline in deaths due to breast cancer among younger women with the disease by 35 percent (over a third!), for real.

The reason I value mammography so highly is because I'm loathe to recommend aggressive treatments that are unlikely to work. Unfortunately, metastatic breast cancer remains incurable; once cancer's spread, chemotherapy, radiation and other therapies are less effective, besides costly and, sometimes, harmful.

I agree with many health care analysts that U.S. physicians prescribe too much medicine and give too little in the way of care. And I'm persuaded that mammograms every other year may be just as effective as annual exams for most women under the age of 50 - a compromise that would singularly halve costs and radiation exposure, a genuine concern.

These data support the continued expansion and improvement in breast cancer screening programs, including mammography.