Before Virginia Thomas, there was Anita Hill and Clarence Thomas -- and Angela Wright (who?)

Angela Wright heard Anita Hill and thought, "I believe her because he did it to me." Her testimony might have changed history. She was subpoenaed. Why wasn't she called? 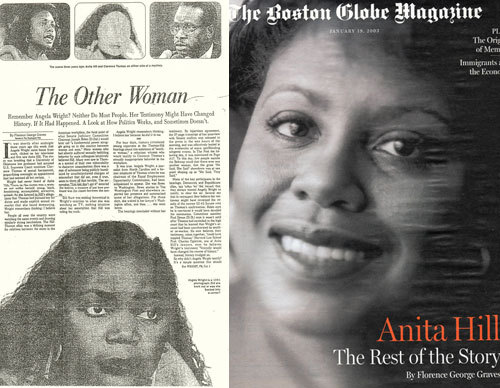 When Virginia Thomas left a message on Anita Hill's voice mail on Columbus Day weekend October 9, 2010, she reopened what many remember as a "he said/she said" debate about sexual harassment. But it could have been "he said/they said." On Columbus Day weekend in October 1991 -- 19 years ago -- another witness was waiting to testify. She could help corroborate Hill's testimony in Clarence Thomas's Senate Judiciary Committee's Supreme Court nomination confirmation hearings. But Angela Wright was never called to testify.

What would she have said -- and why wasn't she called to testify?

In 1994, Florence Graves cleared up those mysteries in The Washington Post, revealing the intricate -- and bipartisan -- behind-the-scenes maneuvering by several Senate Judiciary Committee members to discourage the testimony of Angela Wright, a woman whose information could have helped corroborate Anita Hill's allegations against Clarence Thomas. The article uncovered a surprising unwritten agreement among top Republicans and Democrats not to call Wright, apparently because they feared either that her testimony would create even greater political chaos or that it would doom Thomas' nomination. It also uncovered evidence suggesting that Thomas lied to the Committee. Several senators -- including then-Republican Senator Arlen Specter (Pa.), then-Senator Joe Biden (D-Del.), and other key players -- told Graves they believed that if Wright had testified, Thomas would not have been confirmed.

The article received the Texas Institute of Letters Award for best newspaper article published in 1994.

And almost a decade later...

While Anita Hill was letting her life "speak for itself," the facts -- many of them suppressed at the time -- were unfolding in her favor. The newly disclosed information also was illuminating a deeply flawed system for approving one of the most powerful officials in the United States.

Florence George Graves is the founding director of the Schuster Institute for Investigative Journalism at Brandeis University. As an award-winning investigative reporter and magazine editor, she has focused largely on investigating and exposing political, government, and corporate abuses of power, particularly in Washington. Her work has led to a number of congressional hearings and government probes and to several reforms in public policies.