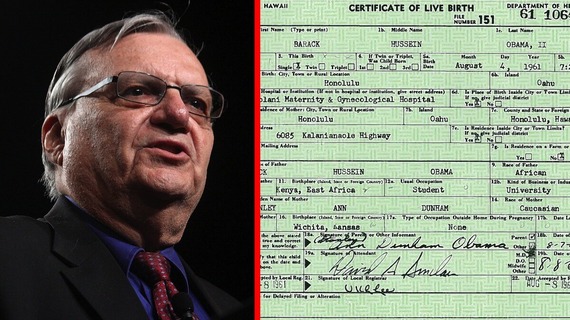 There's not better way to start the week than with several news events that have invaded Life in the Boomer Lane's ever-shrinking brain. LBL believes that if one cannot rid oneself of a demon, the next best thing is to share the demon with others. LBL now passes these little demons on to you.

Joe Arpaio, sherif of Maricopa County, has made a real name for himself by spending a lot of time trying to prove that Barack Obama's birth certificate is bogus. Murder, robbery and assault rates have all been steadily declining in his county, giving Arpaio and his sleuthing team ample free time to focus on what matters to them.

Now, Arpaio and his aides announced last week that a five-year investigation had "proved" that Obama's birth certificate from Hawaii in 1961 was a fake. An accompanying presentation highlighted what they called "9 points of forgery" on the document, which focused on the angles of date stamps, and on typed letters and words.

Donald Trump, when hearing of the latest findings, Tweeted, "I was right. I never said that Obama was born in the US, and now it's been proven. After the inauguration, I'm going to abolish the Department of Vital Statistics, along with the state of Hawaii, for causing this massive failure."
*****
Since most of the known world now gets its news from Facebook, and, since much of what's on Facebook is bogus, Mark Zukerman, Facebook founder has just announced the following: Facebook is partnering with third-party fact-checking organizations--including PoltiFact, Snopes, and the Washington Post--that adhere to standards set by Poynter's International Fact-Checking Network.

And, added to that, Facebook is making it easier for users to report any posts or stories they believe to be a hoax. That part of the announcement had countless readers writing in to charge that all references to either the world being round or that climate change is real are actually false and should be immediately removed.

Millions of Tweets then flooded Twitter, encouraging Facebook to remove any references to Hillary scoring the popular vote, Russian involvement in the presidential election, anything negative about Melania Trump, and anything positive about Saturday Night Live or Alec Baldwin. Facebook officials are looking into the source of the Tweets.

Baby humans and zany animals, the most commonly represented subjects on Facebook, could not be reached for comment.
*****
On Thursday, the House Freedom Caucus, a conservative branch of the GOP, announced it will attempt to undo Michelle Obama's extremely successful programs on obesity and nutrition, and on the USDA New School Nutrition Standards.

Organizers of the attempt had this to say: "These touchy-feely programs are a slap in the face to all red-blooded Americans. Let liberals stuff themselves on tofu and quinoa and drink wimpy herbal tea. Real Americans want Big Macs, Slurpees, and candy. It's what this country was founded on."

An anonymous Tweeter posted, "The House Freedom Caucus rocks! When I take office, I will round up all vegans and make food nutrition labels illegal! No one can read those long words, anyway!"