Every country should have a Newseum, or something similar.

The goal is to document and exhibit news-related information, objects and ideas - to have a living, dynamic record of the country's journalists, news producers, and newsmakers.

The aim is also to honor the countless fourth (and fifth) estate heroes who died protecting everyone's freedom of expression and of the media, and to highlight achievements of innovators who have made it possible for us to know what's happening. 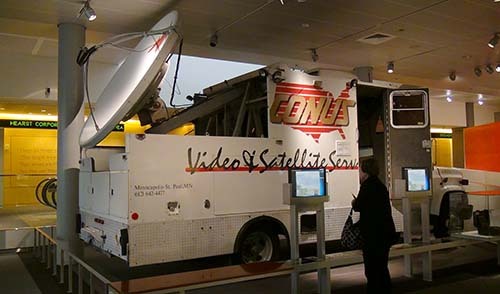 Wasn't Philip Graham, one-time publisher of The Washington Post, quoted as saying "journalism is the first rough draft of history?"

No trip for journalists to Washington, D.C. is complete without a stop at the Newseum, and it's best to allocate two days to really go through it.

I squeezed half a day on a recent visit to the city.

The "new" (to me) Newseum offers an amazing array of displays and information in its airy galleries packed with information on America's history, geography, politics, international relations, and media-related technological advances.

"Creating Camelot," a rich photo exhibit featuring public and private shots of President John F. Kennedy and his family, coincides with the 50th anniversary of his assassination. 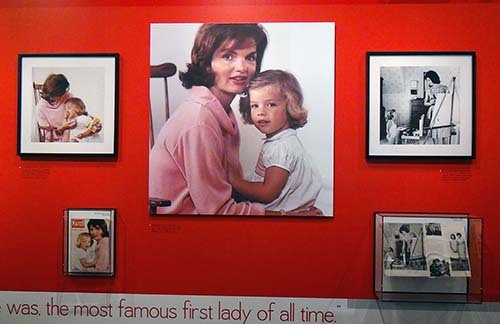 It ties in with a second exhibit detailing media coverage of JFK's murder in Dallas and CBS icon Walter Cronkite's first on-air report of the funeral.

A wall of newspaper front pages headlines the news as a backdrop to a display of mangled metal remains from the buildings. 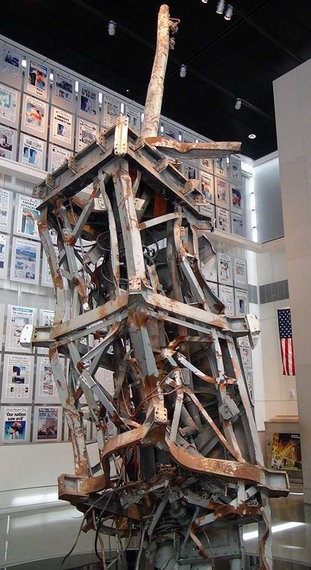 The expensive entry ticket is well worth it if one stretches a tour of the huge building over a second day (free entry) to fully digest the dizzying number of exhibits, documents, digital archives, interactive games and educational content.

Several displays showcase terrorist attacks over the years but a poignant Pittsburgh Post-Gazette caricature of the domestic Oklahoma City bombing of a federal building in 1995 cautions readers not to jump to conclusions by indicting entire communities or ethnic groups. 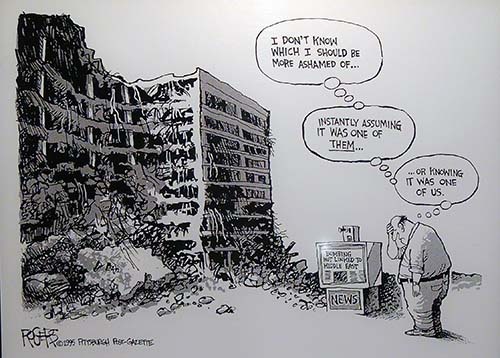 A whole wing is devoted to the Federal Bureau of Investigation (FBI) in an exhibit of news stories on G-Men (G for government) and journalists over a century.

The display cases are full of paraphernalia about the KKK, spies, and terrorists but a particularly striking corner examines games, books, toys and posters of the FBI in pop culture. 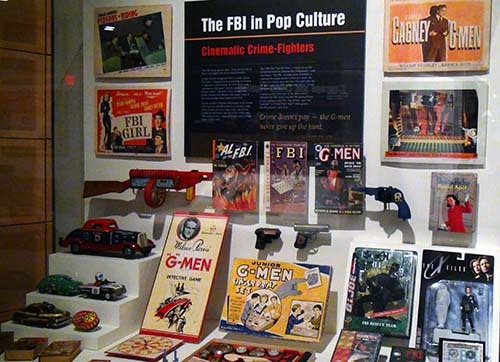 The FBI in pop culture (Abu-Fadil)

For history buffs, the Newseum is a treasure trove of events, machines and recollections about personalities who made the news, literally and figuratively.

Theophraste Renaudot, the French founder of "Gazette de France," was mistakenly dubbed "the father of the newspaper" in 1631 when papers already existed in Germany, Italy and elsewhere.

The telegraph and telephone contributed to the speedy collection, printing and distribution of news.

Those old enough can remember the clanking wire service tickers in their offices spewing reams of paper dispatches from The Associated Press and United Press International. 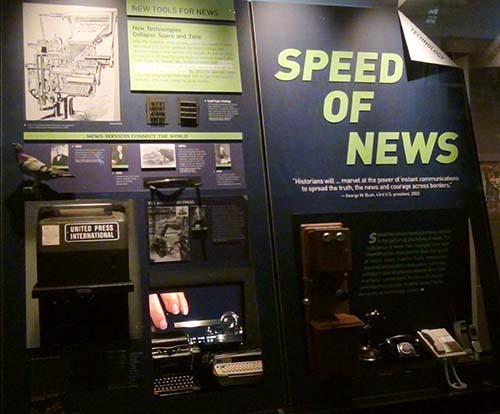 UPI's Helen Thomas who passed away in July was White House dean of correspondents for decades and often attracted attention during presidential news conferences with her red clothes.

As someone who worked for international news agencies and evolved from using note pads, typewriters and telexes to digital multimedia hardware and software, it brought back memories.

So did seeing slabs of graffiti-covered concrete and an observation tower from the former Berlin wall.

After the fall, a correspondent at the Berlin bureau of the agency I worked for got me a piece of it and years later I visited that transformed city. 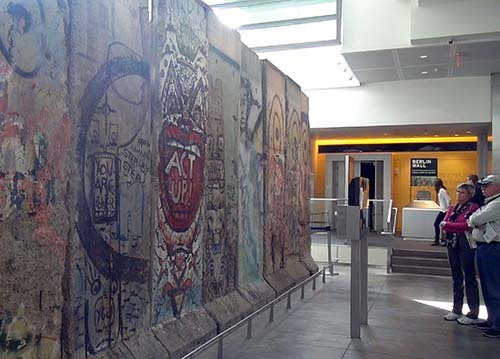 I first saw the Newseum when it resided across the Potomac River in Virginia, in the Gannett buildings, one of which was headquarters of the newspaper USA TODAY.

Since then the paper has moved further into Virginia and the Newseum has occupied a prominent location on Pennsylvania Avenue, between the White House and Capitol Hill.

Key U.S. news organizations funded galleries, theaters and interactive video halls of the Newseum, which also serves as a digital classroom and learning lab for school children, students and adults seeking to know more about the history of journalism, policies and laws governing the media, and by engaging them in team building activities.

Every country deserves such an altar to the news.