Pundits seemed to agree that Biden was on the offense after what some thought was a lackluster showing by Obama last week. The Chicago Sun-Times' headline read, "Biden Bites Into Ryan."

For other newspapers, it was Biden's demeanor that took the spotlight. The Boston Herald splashed a photo montage of Biden flashing his pearly whites at Paul Ryan under the huge headline "CRACKING UP." The New York Daily News also featured “Smilin’ Joe Bites Back,” while the New York Post's angle was "Vote for Joe! Preening VP shows O how to debate.”

The Dallas Morning News and the Austin American-Statesman featured another notable moment on their front pages: when Biden threw his hands up in the air (he was saying that Romney and Ryan talk about the recession as if it "fell out of the sky").

Several newspapers also focused on the fiery performances by both candidates, calling the debate a "slugfest" and a "battle." "Biden and Ryan pull no punches," as the Washington Post put it, was a common take on Friday.

Below, see how newspapers covered the debate: 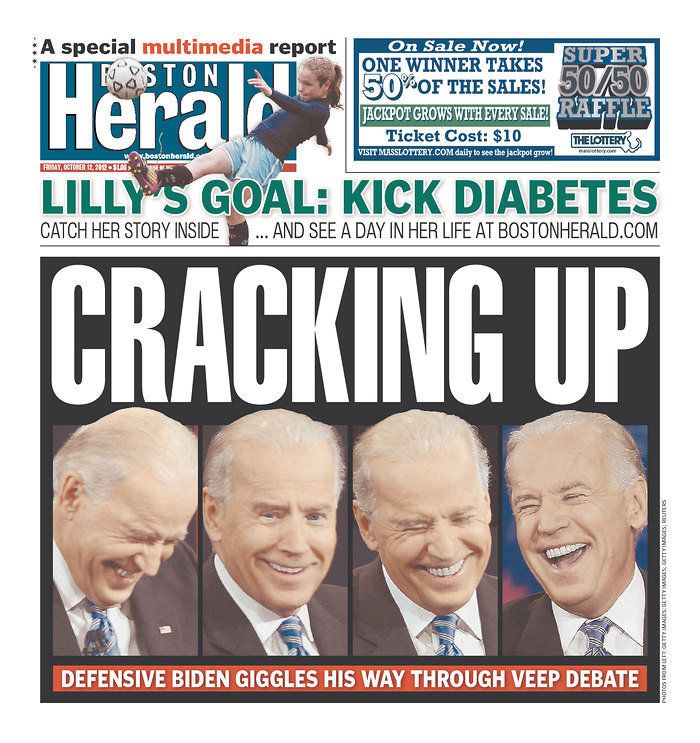