Integrating mobile workflows into existing newsrooms is imperative if newspapers are to survive in an age where social and multimedia are beating legacy organizations to the punch and often outpacing them with breaking news.

"For the first time, newspapers are faced with the challenge of developing content that you can read, watch and touch," wrote Juan Señor, adding that editors are directing mobile teams to design for the eyes and fingers in equal measure.

According to Señor, a partner at Innovation International Media Consulting Group , publishers are creating mobile teams based on a new "Holy Trinity" grouping an editor, graphic designer and developer that often blur editorial and digital production lines. 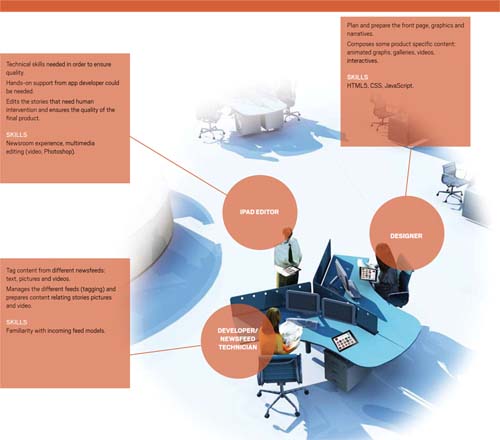 How to integrate mobile workflows in newsrooms (courtesy of Innovation International)

Innovation advises publishers and editors to consider having one developer for every five journalists in a mobile newsroom.

The developer/newsfeed technician, in this scheme, must be familiar with incoming feed models to tag content (text, pictures, videos), manage different feeds and prepare various elements for stories.

The designer, with skills in HTML5, CSS and JavaScript, plans and prepares the front page, graphics and narratives, as well as composes some product-specific content like animated graphs, galleries and videos.

"It is imperative that mobile teams do not operate independently and disintegrated from existing news teams," Señor wrote in "Innovations in Newspapers 2011 World Report," which is produced for the World Association of Newspapers and News Publishers (WAN-IFRA). 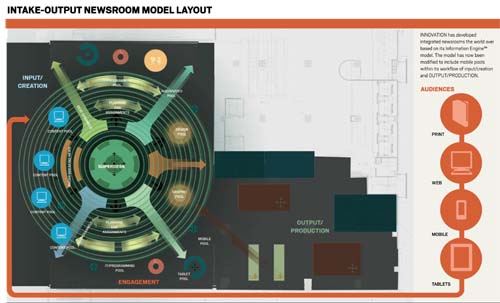 The handy 72-page report reviews progress made by tablets, notably since the iPad was launched over a year ago. 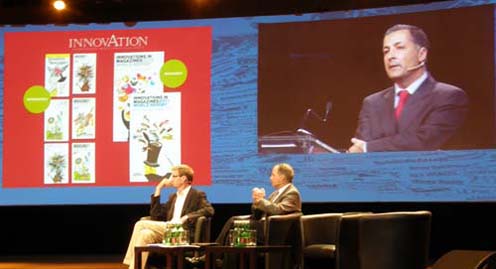 In a chapter on the iPad, it concludes that digital strategies mean unbundling the bundle, re-bundling and re-packaging, constantly experimenting, slowing down at some point to evaluate the market, and, becoming a teacher in digital publishing. 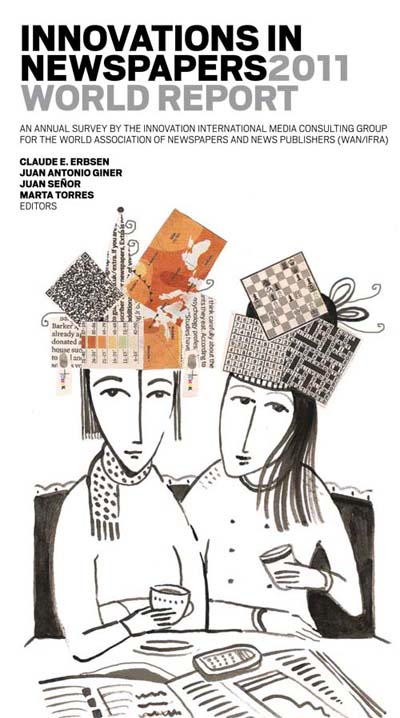 A useful chapter focuses on multimedia narratives and how infographers tell the story on multiple platforms.

It lists The New York Times, Britain's The Guardian and The Telegraph, and, Spain's Público as making good use of data visualizations.

"Instead of relying on proprietary software packages (like Adobe Flash), it has become necessary to adopt open platforms such as JavaScript and CSS to create modular, scalable graphics which can detect and adapt to whatever device is being used by the reader," said Javier Zarracina, an Innovation International consultant.

He added that tactile graphics provide infographers with novel ways to enhance readers' interaction with content and listed several new tools and free software packages that were developed for digital data visualization, including IBM's Many Eyes, Protovis, QGis and Google's APi for creating interactive maps based on Google Maps.

But traditional infography also has its merits, and Zarracina features the United Arab Emirates paper Al Bayan's preview for the Formula One race in Abu Dhabi with a flaming red Ferrari driving through a circle of information about the event. 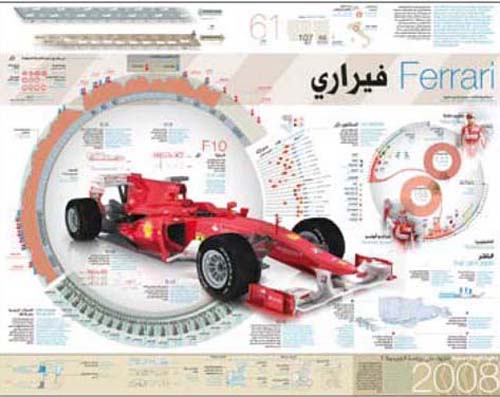 Social media, of course, get their fair share of scrutiny in the booklet as more journalists engage with their readers, viewers, listeners and browsers through blogs, Facebook, Twitter and other outlets.

"Seven years after the launch of Facebook, and five years after the debut of Twitter, there is still a sense that newsrooms are trying to figure out how social media fits into their journalism, what works, and what doesn't" wrote Chris O'Brien of the San Jose Mercury News in the report.

He noted that news organizations have been developing social media policies to remind employees they must adhere to basic journalistic standards. 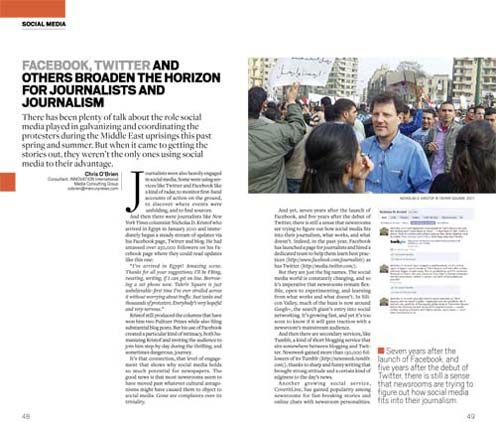 The Associated Press recently updated its social media guidelines a week after warning staffers about expressing opinions on Twitter.

A nagging question facing newspapers has been whether or not to set up paywalls, but Innovation International believes the focus of the discussion is often misplaced.

"We do not think the question that needs to be asked first is 'To charge or not to charge?' but rather "What content are people willing to pay for?'" 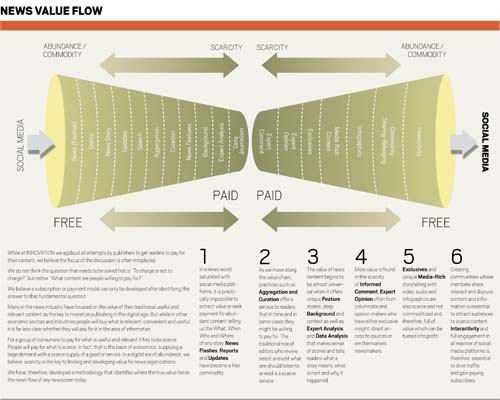 And, such content has to be scarce to entice consumers to dish out for it since so much else is already available online for free.

A new twist to the "digital first" equation is a successful model for online media that made the leap to print, and are apparently profiting from it.

Rue 89 was launched online in 2007 by disgruntled journalists who had jumped ship from the French daily Libération. 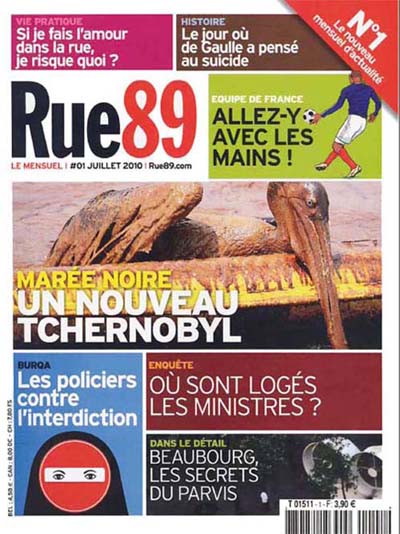 Rue 89 goes from digital to print (courtesy of Innovation International)

"Last year, once they had built up a substantial online presence, which today hovers at around two million unique visitors a month, they decided to re-purpose their content in print," according to Innovation International president Juan Antonio Giner.

Another winner is Longshot that began as a crowdsourced publication appearing occasionally in a free online format, accompanied by a printed version, the report said.

"In their own small way, these new 'born digital' publications in print underscore the continuing appeal of the printed page," it added.