Now that the schlocky euphoria of "Sharknado" -- and the tsunami of tweets it inspired -- has settled down, we must return to reality. With courage and fortitude, we must confront the facts: The summer of 2013 contains no more shark tornados, but we will have speechifying Aaron Sorkin characters in abundance.

Yes, "The Newsroom" (10 p.m. ET Sunday, HBO) is back, and much as we might wish Aaron Sorkin would try writing disaster movies for Syfy ("Sorknado 2: The Filibustering"), he has stuck to what he knows best: Hyper-educated men and women walking-and-talking, unleashing great torrents of words about Things That Matter, sparring through their simmering attractions and jousting over current events.

Well, not too current. And whatever else you think of "The Newsroom" creator's Sorkinistic tics and talents -- the heart-on-sleeve earnestness, the condescension that's supposed to be funny (or heroic), the magical belief that better news coverage could fix America -- that's really the main issue with the HBO drama. The show's structure, which has characters at a fictional news network living through and reporting on events that occurred two years ago, either works for you or it doesn't.

Fictional elements that are not harvested from the 2011 news cycles occasionally crop up, and Season 2 contains other course corrections: The tone has been moderated and the some of its excesses have been turned down a few notches. But for me, the fact that we know all about the things the characters are encountering for the first time drains away much of the potential momentum, suspense and energy -- and that would be the case even if Sorkin weren't the show's writer/creator.

The show doesn't ring my bell, personally, but never mind; there's lots of good TV to watch or catch up on this summer.

And in all sincerity, I've got to thank the Sorkinator for supplying me with the opportunity to come up with the "Newsroom" bingo card (below), an endeavor I enjoyed quite a bit (thanks very much to Carl Brand, who supplied the design wizardry you see below). 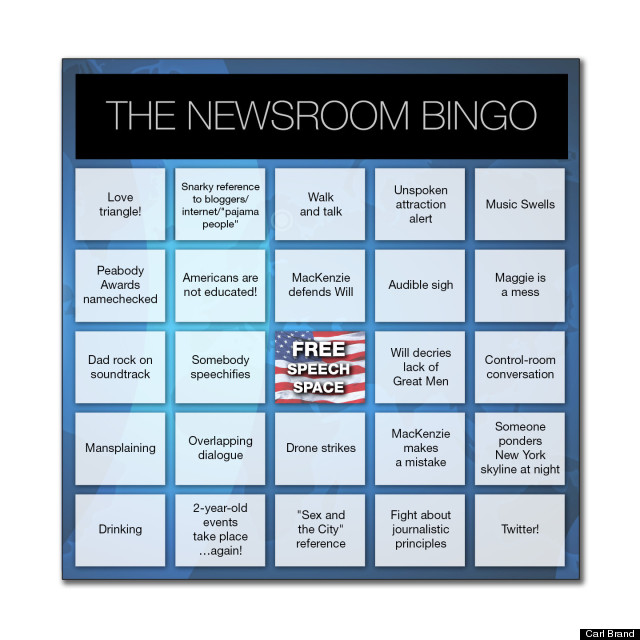