We should be in the relationship business, said media guru Jeff Jarvis, suggesting our longstanding mantra that content is king needs revisiting.

Creating and finding value in relationships with people should be editors' goals, he was quoted as saying in "Trends in Newsrooms 2014," a must-read publication by the World Association of Newspapers and News Publishers (WAN-IFRA). 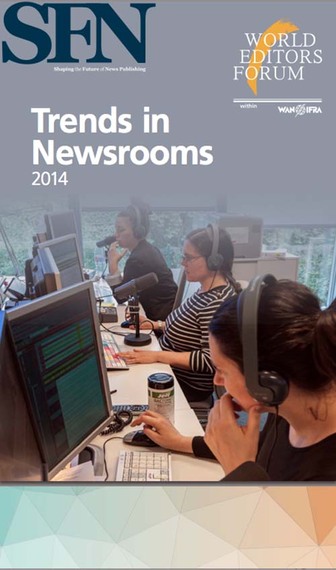 Jarvis is director of the City University of New York's Tow Knight Center for Entrepreneurial Journalism.

Last year he asked participants at the World Editors Forum what if they were in the content-production business, structured everything around manufacturing content, and obsessed over the value of their content, rather than being in the content business.

According to the report, media don't have to be mass-oriented any more; it's now possible to serve people as individuals, as companies such as Amazon and Google do.

Translation: newsrooms have to be in a constant state of retooling and reformulating their products, with an emphasis on training their managers, editors and journalists to ride the endless disruptive wave of change.

Chief editors have always been required to wear a variety of hats. But the perpetual changes in newsrooms demand a new kind of editor, one who is not only an expert at managing news and leading people, but one who also understands new technologies and products as well as the increasing importance of the business side of news.

A series of interviews with editors and thought leaders in the report indicates how the separation of editorial and business decision making is no longer as stark as it once was, with editors progressively more involved in discussions on business models, revenue streams and the need to understand a multiplatform ecosystem.

To that effect, the report quotes Robert Montgomery, journalist, trainer and author of A Field Guide for Mobile Journalism, as saying: "Mobile is currently seen as an extension, when in fact it is a whole new world."

He had the following advice for editors about journalists' growing use of mobile phones and other digital technology:

1. Sit in on the training with the reporters and follow up to appreciate what hardships they face.

2. Equip journalists with the necessary small, sturdy mobile hardware they'll use on assignment.

3. Give journalists realistic briefs by not expecting them to be jacks-of-all-trades and divide the workforce to ensure quality reporting.

4. Redesign jobs and the workflow in a newsroom, figure out how technology fits in publishing system, and decide if apps developers, data journalists, designers, and audio/visual producers are needed to complete the picture.

6. Use social media, which many editors are still reluctant to do. If editors are to build a mobile newsroom that works, they must have personal experience with mobile technology and social media. 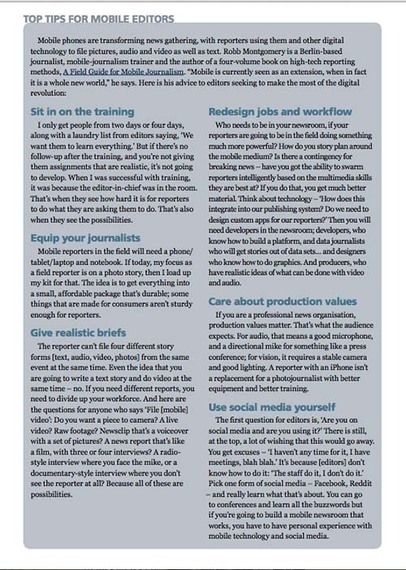 On another front, the report underlines the importance of shielding journalism in the age of surveillance following Edward Snowden's revelations.

In the post-Snowden-leaks era, newsrooms are increasingly aware of state-sponsored breaches of privacy and the threat they pose to journalists and their sources. Many newsrooms have introduced sophisticated anti-surveillance technology, and others have literally reverted to notepad, pen and clandestine meetings in the interests of shielding their sources and avoiding state, and corporate, electronic surveillance.

Those old enough will remember the cloak-and-dagger newsgathering and verification techniques of Watergate scandal reporters Bob Woodward and Carl Bernstein and how their Washington Post editors vetted their stories.

If source confidentiality can't be ensured, investigative journalism suffers and citizens are kept in the dark about misdeeds and incompetence.

Hence the need to learn new techniques, the creation of newsroom awareness, establishment of proper in-house training, and the institution of good management systems to combat pervasive surveillance.

According to Alan Pearce, journalist, broadcaster and author of Deep Web for Journalists: Comms, Counter-Surveillance, Search, cyber-security awareness should now be a standard feature of a working journalist's essential skill-set. 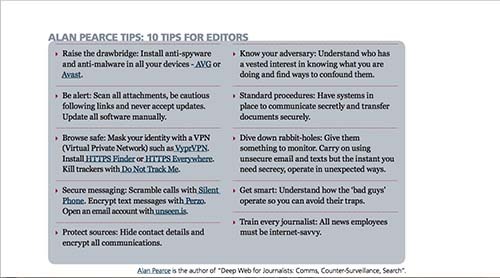 But super-sleuthing scoops shouldn't come at the expense of accuracy.

"We have the ability to get news out faster than ever but we'll break it all if we don't verify & get it right," she said.

Screen shot of Julie Posetti's tweet on need for accuracy

Not to be overlooked is the expanding role native advertising, or sponsored content, is playing in media and the ethical challenges it presents to editors.

"While native advertising contains clear rewards for the business side, it also carries clear risks to editorial integrity and the brand at large," the report said, noting that publishers must be transparent and clear about where the content paid by sponsors is in the information being disseminated. 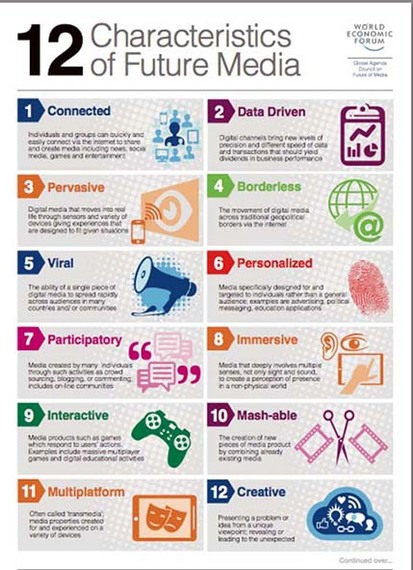