Newsweek made an unfortunate error in their slideshow of the "Least Rigorous" colleges Monday.

In the slide about Penn State University, the Newsweek website labeled them as "Penn State Abuse Insurer." The slide, like all of the others, was supposed to simply be the name of the school.

A spokesperson for Newsweek blamed it on a production error.

“It's a computer glitch that sometimes happens when they pull pictures sometimes," Newsweek/The Daily Beast spokeswoman Justine Sacco told the Wall Street Journal. "The title of the picture will come up.”

The photo of Penn State's campus from the Associated Press has been widely used, including by The Huffington Post. Some news websites use tools that automatically add the title or caption of a file or stock photo when a photo is placed.

The list was of the 25 "Least Rigorous" schools, done in collaboration with College Prowler. The rigor of the curriculum was measured by an "assessment of workload manageability and the student-to-faculty ratio." Penn State was ranked 22nd overall.

Newsweek subsequently fixed the headline and added an editor's note, which reads, "We have removed an erroneous headline that was previously attached to this slide due to a production error."

Newsweek wasn't the only publication to make an unfortunate gaffe on Monday. Fox News erroneously reported that Baghdad was in Iran after wrestler Hamid Soryan won the gold medical at the 2012 Olympic games in London. 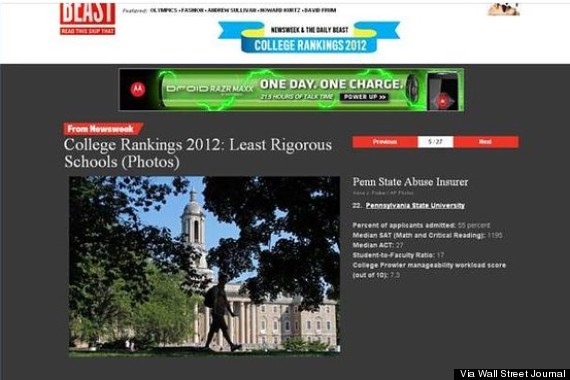