New York Times columnist Paul Krugman has been one of the most vocal critics of the Obama administration's bank bailout plan. As the Financial Times noted Friday, Krugman is one of the "many prominent left-leaning economists" who is leading what the article referred to as "the liberal backlash" against Obama. For example, in a widely-read post on his blog "Conscience of a Liberal" last Saturday, Krugman criticized Geithner's plan for the banks, declaring that "the zombie ideas have won." His critique quickly echoed around the blogosphere and beyond.

This week's issue of Newsweek highlights, and perhaps helps solidify, Krugman's status as arguably the most prominent, influential and prescient critic of the administration on the left by featuring him on the magazine's cover alongside the headline "OBAMA IS WRONG: The Loyal Opposition of Paul Krugman." (SCROLL DOWN FOR IMAGE OF COVER)

As Newsweek editor Jon Meacham writes in his letter to the magazine's readers about the Krugman article:

Every once a while, ... a critic emerges who is more than a chatterer--a critic with credibility whose views seem more than a little plausible and who manages to rankle those in power in more than passing ways. As the debate over the rescue of the financial system--the crucial step toward stabilizing the economy and returning the country to prosperity--unfolds, the man on our cover this week, Paul Krugman of The New York Times, has emerged as the kind of critic who, as Evan Thomas writes, appears disturbingly close to the mark when he expresses his 'despair' over the administration's bailout plan. [...]

There is little doubt that Krugman--Nobel laureate and Princeton professor--has be come the voice of the loyal opposition. What is striking about this development is that Obama's most thoughtful critic is taking on the president from the left at a time when, as Jonathan Alter notes, so many others are reflexively arguing that the administration is trying too much too soon.

Krugman is having his 15 minutes and enjoying it, although at moments, as I followed him around last week, he seemed a little overwhelmed. He is an unusual mix, at once nervous, shy, sweet and fiercely sure of himself. He enjoys his outsider's power: "No one has as big a megaphone as I have," he says. "Aside from the world going to hell, it's great." He is in much demand on the talk-show circuit: PBS's "The NewsHour" and "Charlie Rose" on Monday last week, ABC's "This Week With George Stephanopoulos" this past Sunday. Someone has even cut a rock video on YouTube: "Hey, Paul Krugman, why aren't you in the administration?" A singer croons, "Hey, Paul Krugman, where the hell are you, man? We need you on the front lines, not just writing for The New York Times." (And the cruel chorus: "All we hear [from Geithner] is blah, blah, blah.")

Krugman is not likely to show up in an administration job in part because he has a noble--but not government-career-enhancing--history of speaking truth to power. With dry humor, he once told a friend the story of attending an economic summit in Little Rock after Bill Clinton was elected president in 1992. As the friend recounted the story to NEWSWEEK, "Clinton asked Paul, 'Can we have a balanced budget and health-care reform?'--essentially, can we have it all? And Paul said, 'No, you have to be disciplined. You have to make choices.' Then Paul says to me (deadpan), 'That was the wrong answer.' Then Clinton turns to Laura Tyson and asks the same questions, and she says, 'Yes, it's all possible, you have your cake and eat it too.' And then [Paul] says, 'That was the right answer'." (Tyson became chairman of Clinton's Council of Economic Advisers; she did not respond to requests to comment.) Krugman confirmed the story to NEWSWEEK WITH a smile. "I'm more tolerant now," he says. But at the time, he was bitter that he was kept out of the Clinton administration. 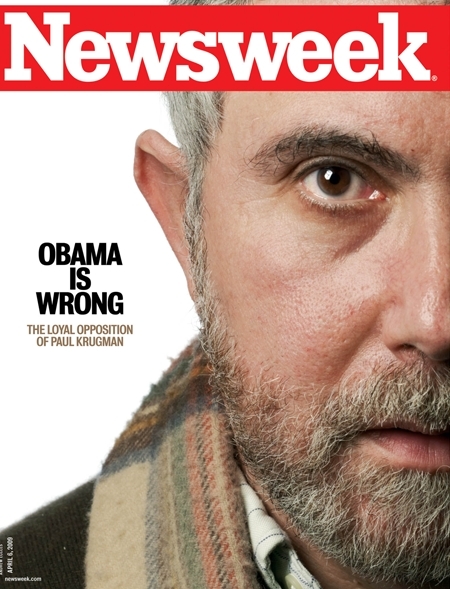