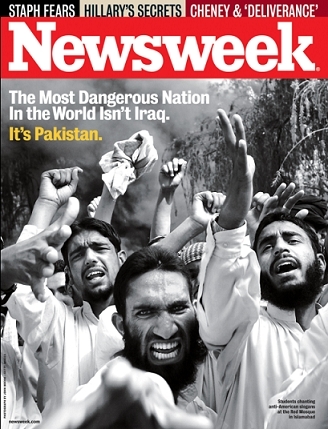 On October 18, 2007, former Pakistani prime minister Benazir Bhutto was the target of a violent assassination attempt by a suicide bomber who blew himself up and killed at least 134 people. Three days later, on Oct. 21, 2007, Newsweek came out with a cover story asserting that Pakistan was the most dangerous country in the world, topping both Iraq and Afghanistan — the result of a two-month old investigative story that went to print pegged on the attack. Two weeks later, the rest of the world began to agree: On Nov. 3, 2007, Pakistan president Pervez Musharraf declared a state of emergency that effectively suspended the Constitution, established martial law, and rounded up hundreds of lawyers, judges and activists, throwing his country into disarray and straining the delicate balance of power in that nuclear-enabled country, throwing the upcoming January elections into doubt and becoming more vulnerable to Taliban extremists who, presumably, would be even more dicey to have hovering over that red button. That, incidentally, was the focus of Newsweek's piece: The resurgence of the Taliban in Pakistan and the establishment within the country of jihadist bases for Taliban and al Qaeda extremists, along with that burgeoning — and not all that secure — nuclear program. The most dangerous country in the world, indeed — back in November, Newsweek was looking pretty prescient as Pakistan led newscasts, made headlines, and was uppermost in mind. Musharraf even got a nod as a possible Time "Person of the Year"contender on par with Mahmoud Ahmadinejad and Vladimir Putin as part of an "unstable dictator" triumvirate. But by the third week of December, Pakistan had stabilized somewhat and receded from view, and Putin took the POY prize without so much as a nod in Musharraf's direction (well, he got a mention in a Joel Stein column, if that counts).

All that changed yesterday, of course, with Bhutto's assassination. Now the country is in turmoil, the elections seem in doubt, Musharraf seems guilty (helped along by Bhutto's posthumous accusation), and everyone seems nervous — mostly because of those jihadists and those nukes. Oh, and also, Osama might be hiding there, because apparently it's super easy for terrorists to come and go. For him, and his friends. And did we mention those nukes? Far be it for Newsweek to say "I told you so," but let the record reflect that roughly two and a half months ago, it did.