What's going on with the troubled campaign of deeply unpopular former House Speaker Newt Gingrich? Oh, not much. Right now, the central plank in his platform appears to be asking NBC News for an apology for saying mean things about his wife Callista. Last night, he carried this brief onto the set of On The Record with Greta Van Susteren.

GINGRICH: I just want the American people to know that Callista graduated as a piano major. She's played in the city of Fairfax band on the French horn since 1989. She sings in the basilica of the national shrine of the Immaculate Conception choir. She's the head of Gingrich Productions and has helped make seven different documentaries, one of which, about Pope John Paul II, was picked as one of the top three films by the Vatican this year about the pope. She chairs a foundation which has given away $800,000 to charities. And she's currently writing a children's book, in which Ellis the elephant introduces 5 to 8-year-olds to a sweet land of liberty, the history of America.

I say that as background because I thought NBC this morning, in a program that had nobody on camera, nobody quoted by name, that quoted reporters talking anonymously about cowardly people, who, frankly, lied about my wife -- and I believe NBC owes Callista an apology.

The fact is, my campaign is my campaign. Yes, we make decisions as a couple, but in the end, I take full responsibility. And I think the program this morning was totally irresponsible and personally reprehensible and the kind of thing that makes it hard to get decent people to run for public office.

Okay, prepare yourself, but you know what? I think Gingrich has a point! I missed the segment on the Today Show yesterday morning where Michael Isikoff reported all the rumor and sigh from Gingrich's recently-departed staffers that largely blamed Callista and her hair-maintenance schedule for their decision to quit on the Man Of Ideas. However, I did catch MSNBC following up with a segment they introduced with a chyron that read "Worst Wives Club," and I have to say, I had to choke back a little bit of gorge. 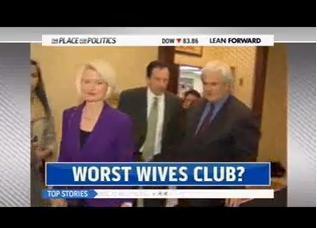 See, most of the "reporting" that's being done on this boils down to gossipy nonsense from disgruntled staffers, who quit Gingrich "en masse" while simultaneously maintaining their praise for Gingrich as a politician. It's easy to see why: who wants to admit that their poor judgment led them to sign on with a terrible presidential campaign. So, because they have to keep Gingrich's reputation as an attractive genius alive, the blame falls at the feet of Callista.

This seems to be a recurring theme with gossipy, disgruntled staffers and the reporters who scribble down their every rumor and complaint. The adored Bible of the 2008 campaign, Game Change, is a compendium of staffer gossip and rumor and invention, and it too makes political wives and women in general out to be beastly, so much so that its existence played a role in John Thune's decision to not run for President. That book contains a key passage that exists only to bring a ton of bricks down on Judith Nathan -- the wife of marginal candidate Rudy Giuliani -- where a heroic Ed Goeas rebuffs her offer of help with the demand that she learn to be "humble."

That's basically what the wives of candidates are expected to do! Dress nice, whinny like a show pony, and impress Sally Quinn with your grasp of social niceties. I still recall a conversation in the run-up to the 2004 primaries with a group of schmoozy D.C. Democrats in which they bitterly complained that Howard Dean's wife, Judith Steinberg Dean, was refusing to quit her medical practice and go on the stump. I told them that I was sort of in favor of people having access to health care, and women having independent lives and jobs, and they looked at me as if I had just suggested we all run out that moment to knock over a jewelry store. (That was pretty much the moment I wrote off schmoozy D.C. Democrats as a lost cause.)

Gingrich's ire is not confined to NBC News, however. He's apparently not that happy with his departed staff, either:

And remember, these -- these -- by the way, these are supposed to be professionals, who we were paying, who supposedly had some sense of confidentiality, and who promptly, frankly, did some back-stabbing in a way that I just found amazing. After all my years in public life, I don't mind people attacking me. I'm the candidate. I'm a big guy. I can take it. But to go after anyone's wife I think is pretty despicable.

You know, it's entirely possible that Callista Gingrich is as awful and demanding as all these people say she is. But Newt Gingrich said, "The fact is, my campaign is my campaign. Yes, we make decisions as a couple, but in the end, I take full responsibility." And you know what? He is absolutely right! It was not Callista Gingrich who called Paul Ryan's budget plans "right wing social engineering," sending the donors that the Gingrich campaign had lined up sprinting for the exits. And Newt Gingrich was not shanghaied into establishing a line of credit at Tiffany's, nor was he abducted and taken aboard an ocean liner in the Mediterranean. Those were all things that the candidate did of his own volition. He's the "Ideas Guy," right? Well, those were all his awesome ideas for the spring of 2011.

Let's also look back on how Gingrich began his defense of Callista:

She's the head of Gingrich Productions and has helped make seven different documentaries, one of which, about Pope John Paul II, was picked as one of the top three films by the Vatican this year about the pope. She chairs a foundation which has given away $800,000 to charities. And she's currently writing a children's book, in which Ellis the elephant introduces 5 to 8-year-olds to a sweet land of liberty, the history of America.

You see, while Gingrich is sort of saying that his old staff wanted to run an old-school campaign and that he wanted to mainly play with YouTube and Facebook and stuff, it seems pretty clear to me that "the Gingrich campaign" is less about an authentic run for the White House and more about a marketing campaign to monetize and synergize all of the Gingrich family's lucrative side projects. It's been pretty apparent to me, this whole time, that this is what the Gingrich campaign has been built to do. Gingrich says, "Barack Obama stands for European secular socialism" and "We stand for American exceptionalism," and by the way, he has a book out on the former and a movie coming out on the latter, and he takes all major credit cards.

So let's remember that all this Callista-slagging, justified or not, is coming from a bunch of people who resent the fact that they spent all this time on a merchandizing project when they thought they were working on a political campaign and now feel that they look sort of stupid, the end.