WASHINGTON -- Two new automated polls show sharp declines in support for Newt Gingrich in Iowa, and the national Gallup Daily tracking poll shows a more subtle decline nationwide. The consistency in the trends suggests that the changes are real, and a heavy and mostly unanswered barrage of attack ads in Iowa explains why Gingrich's support there may be falling more rapidly.

The two new automated polls have captured the attention of the news media and helped spur a big move toward Romney on the Intrade prediction market. Specifically, 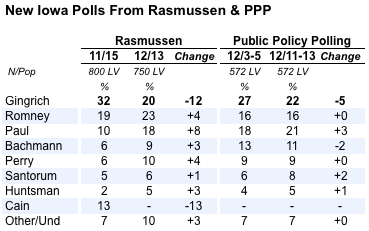 Can these automated polls be trusted? Detractors worry about their inability to contact voters in cellphone-only households and other methodological shortcomings. Proponents argue that their anonymous nature and presumed lower response rates may be an advantage in identifying the very narrow segment of likely caucus goers.

Either way, that difficulty of identifying Iowans likely to vote in the caucus means that any poll may be off as to the level of support for a given candidate, but if conducted consistently, any poll should provide a decent measure of trends over time. In this case, the two robo-polls provide two apples-to-apples comparisons, and both show a sharp decline for Gingrich.

The two results are consistent with an American Research Group survey, conducted by live pollsters earlier this week, that showed Gingrich with 22 percent of the vote.

In addition, the PPP poll ads another important piece of data that bolsters the case for Gingrich's decline in Iowa. His favorable rating has dropped 10 percentage points (from 62 to 52 percent), while his unfavorable rating jumped nine (from 31 to 40 percent).

Outside of Iowa, the live-interviewer Gallup daily tracking poll is showing a similar but slightly less severe decline in support for Gingrich among Republican identifiers nationwide. In the first week of December, they reported support for Gingrich varying between 34 and 37 percent, but their most recent release this week shows his support has fallen to 29 percent. 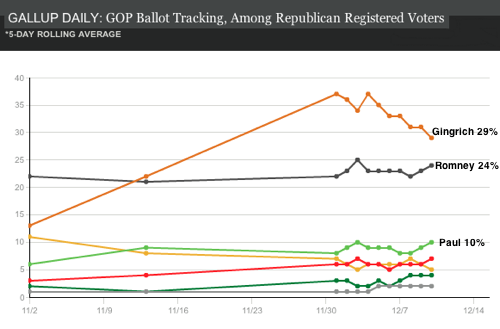 A sharper decline in Iowa would be consistent with the campaign being waged there, as voters in Iowa are more engaged in the campaign and have been exposed to millions of dollars of campaign advertising (roughly $2.9 million worth for the week of December 5, according to data published by The Washington Post).

More importantly, at least three of Gingrich's rivals have used those media dollars to deliver negative attacks like the one below aired by Mitt Romney's super PAC. Politico's Jon Martin reports that a "minute-long negative spot brutalizing Gingrich" ran in Iowa from Friday through Wednesday, and was replaced by a 30-second version today. Ron Paul had an even harder-hitting attack on Gingrich running in early December.

And Gingrich has yet to respond with advertising of his own, except to note that "others seem more focused on attacks rather than moving the country forward" in a new, mostly positive advertisement.

Some political scientists argue that the negative ads in Iowa are a "waste of money," but the conditions there are different from those tested in much of the research they cite. If anything, the scenario that has played out in Iowa over the last two weeks is the near-perfect scenario for negative ads to have an impact. Unlike a general election, voters in a primary or caucus are not rooted in party identification, and the Republican field lacks an incumbent or a dominant, established frontrunner. Many Republicans are feeling conflicted about the candidates and uncertain about their preferences.

Moreover, Iowa voters are seeing a heavy volume of attacks against Gingrich from multiple sources, and the attacks are gaining traction as they recirculate in the news media and as a topic of conversation among prominent conservatives on cable television news (which also contributes to the national trend).

Likely Republican caucus-goers are also older and more politically interested, thus more easily reached via broadcast television advertising. They are "a pretty homogenous group that rabidly watches FOX News and listens to talk radio," according to Jon Hutchins, president of Media Strategies and Research, a firm that buys television time for Democratic candidates. "You don't have to drown them with heavy TV points to be effective," Hutchins says, "so a heavy buy on these [outlets], plus a supplemental broadcast TV buy at moderate levels, really can hit this audience hard."

Mark Mellman, the Democratic pollster who advised John Kerry in 2004, believes the ads running against Gingrich are having an impact. "When the ads are credible, when they're relevant, when they're at a level that people hear and see them," he says, "they matter."

So what comes next? "There are lots of ways to deal with negative ads," says Mellman, "but not dealing with them generally is not the right strategy."

If the attacks continue unanswered, the Gingrich's Iowa decline may continue.