WASHINGTON -- Does the stunning, come-from-behind victory by Newt Gingrich in the South Carolina primary signal a "paradigm shift" in the Republican race? Could Gingrich actually win the GOP presidential nomination?

The victory has certainly brought about a significant shift in the preferences of Republicans. The latest results from Gallup's national daily tracking poll show that Gingrich and Romney are now tied among rank-and-file Republicans nationwide.

Although Romney's star had been rising rapidly in the immediate aftermath of his victory in the New Hampshire primary -- he led Gingrich by 23 points just a week ago in Gallup's tracking -- the events of the last week have shaken up the race once again. Romney's lead over Gingrich has now narrowed to a single percentage point (29 to 28 percent). 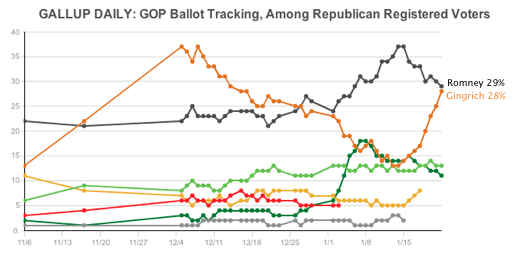 Among some pundits and political scientists, the South Carolina results have stirred a debate about whether something very different is afoot in the nomination process or whether the the traditional rules still apply.

One school of thought, greatly influenced by the work of political scientists Marty Cohen and his colleagues in the book, The Party Decides, argues that Romney's nomination is all but inevitable.

Cohen and his co-authors found that a candidate's share of endorsements just before the early primary elections is often a better predictor of the ultimate nominee than early polls. Their theory is that endorsements are both an indicator of consensus choice among party insiders and a cue to ordinary rank-and-file voters about which of the contenders is the most viable nominee for the general election.

"It would be hard to read this book," explained political scientist Seth Masket, "and come away thinking that anyone other than Romney will be the Republican nominee this year." Romney has big advantage in endorsements, and polling shows him to be "broadly acceptable within the party, even if most people aren't enthusiastic about him." Gingrich, on the other hand, "is precisely the sort of candidate who should not win according to this theory." He has few endorsements, little money and "Republican elites have gone out of their way to trash him."

A different perspective, advanced on Sunday by The New York Times' Nate Silver, is that Gingrich's South Carolina success may signal a more fundamental change. Perhaps, Silver suggests, "elite support and the ground game do not matter as much as usual," and the rules of The Party Decides no longer apply. Perhaps a new paradigm applies in which "personalities matter a lot, and nominations are determined based primarily on momentum and news media coverage."

Underpinning this wonky debate is an obviously critical question: Can Gingrich win, or will his South Carolina surge prove just a momentary speed bump on the way to a Romney nomination?

As Silver argues, something is different about the 2012 nomination battle, most notably the "exceptional volatility" in evidence as candidates like Rick Perry, Herman Cain, Michelle Bachmann, Rick Santorum and Newt Gingrich have taken turns surging and declining in public opinion polls.

But that volatility is not a mystery. Most Republicans have been reluctant to embrace Romney, even though most also consider him their most viable candidate, because they would prefer to find a more conservative champion. Their "attitudes aren't yet crystallized," as political scientist John Sides puts it, leading to great volatility. In a sense, the rank-and-file Republican Party has not yet decided.

The issue is not that Republicans are flatly opposed to Romney. A CBS News/New York Times survey conducted just after the New Hampshire primary found that only 10 percent of Republicans nationwide could not support Romney, but only 28 percent were ready to support him "enthusiastically." The rest could back Romney only "with reservations" or "because he is the Republican party nominee" (59 percent).

Gingrich broke through in South Carolina because he became the consensus choice of those still unenthusiastic about Romney. The South Carolina exit poll shows that among those who said they could support Romney only with reservations, Gingrich received 51 percent of the vote to 24 percent for Santorum and just 11 percent for Romney.

Gingrich succeeded in South Carolina, however, not by creating a new paradigm, but rather by succeeding on some of the very mechanisms identified as critical by The Party Decides:

First, Gingrich's stunning surge at the end of the South Carolina campaign was driven in part by two important endorsements. Rick Perry dropped out of the race and threw his support to Gingrich, and Sarah Palin, though withholding a formal endorsement, urged South Carolina Republican to "vote for Newt" in order to "keep this thing going."

Second, though Gingrich may still trail Romney in elite endorsements nationwide, he appeared to have the upper hand among local elected officials and activists in South Carolina. The Huffington Post/Patch Power Outsiders survey found that as the race came to a close, 44 percent of the influential Republican insiders interviewed in South Carolina supported Gingrich, while just 23 percent supported Romney.

The events of the last week have served as a cue to Republicans nationwide that Gingrich may be emerging again a consensus alternative to Romney, so his star may rise further. However, the test of whether Gingrich can capitalize on his South Carolina victory and mount a successful challenge to Romney depends on the former House speaker's ability to replicate the South Carolina formula on a wider scale. His ultimate success depends on the answers to these questions:

A Gingrich victory is not unthinkable, just highly improbable, even according to the "old paradigm" outlined in The Party Decides. As Masket points out, though leads in endorsements, a large majority of potential endorsers remain on the sidelines.

"Even if the basic mechanisms are the same," writes Hans Noel, co-author of The Party Decides, "sometimes it's different." And as RealClearPolitics' Sean Trende points out, the Republican primary voters are the same "electorate that selected Christine O'Donnell, Carl Paladino and Linda McMahon as its standard-bearers -- in very blue states with relatively moderate GOP electorates, no less."

The difference in 2012 may be about a conflict between the upper echelons of the Republican party and its activist base. Gingrich has a small but real chance of upending Romney. If he does, it will be by connecting with that activist base. In other words, by following some of the fundamental rules of past nominations, not by breaking them.