CONCORD, N.H. -- Not long into Sunday's Town Hall meeting at Don Quijote Restaurant in Manchester, Newt Gingrich was interrupted by Occupy protesters banging on the glass windows around the restaurant.

"Newt.. Newt.. Newt," repeated a voice through a bullhorn. "Director Newt. We have you surrounded. Come up with your hands up and your pants down."

Gingrich, who was discussing manufacturing, an issue of local importance in the Granite State, ignored the disturbance. But the heckling continued: "I'm not leaving until they take Newt out in handcuffs," someone shouted. Others held signs reading "Money out of politics," and "99% is too big to fail." 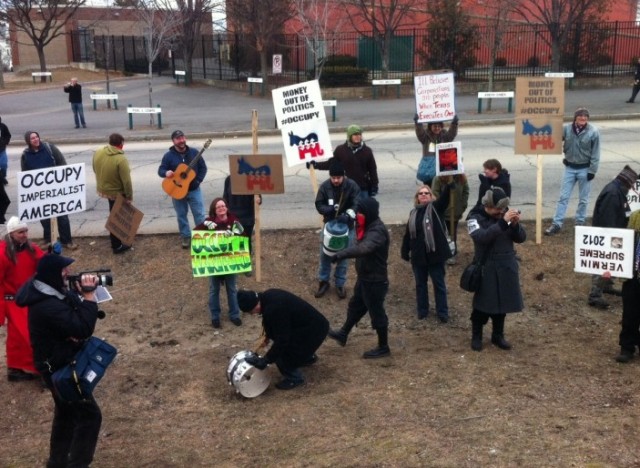 Ironically, as Slate's David Weigel pointed out on Twitter, the protesters outside distracted the audience inside from a question raised on corporate money's influence on the presidential candidates. The questioner implored Gingrich to stop accepting corporate donations:

"Everyone's in favor of jobs!" someone else shouted out.

"Who's not in favor of jobs here?" the person fired back.

Gingrich said he didn't want to start a debate and moved on to the next subject. 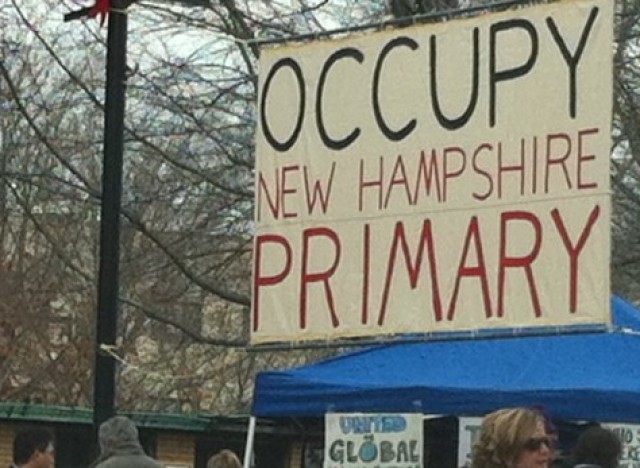 Occupy New Hampshire Primary set up camp in downtown Manchester as the crop of presidential candidates arrived, and the group is making themselves heard days before the First in the Nation contest.

The movement continues to stop short of taking a partisan position, exemplified in a mock-ballot sign listing three options: 'Democrat,' 'Republican,' and 'We the People,' with a check mark next to the last. Shortly after the Gingrich event, demonstrators were on their way to protest President Obama's Manchester headquarters.

The Occupy sentiment also followed leading candiate Rick Santorum on the campaign trail. The conservative candidate was mic-checked after voicing his views on gay marriage at a Town Hall meeting in Hollis, and again at a stop-off at a local market. "Go back to your tent!" a supporter told the heckler.

While most often the candidates ignored the disruptions, Mitt Romney decided to engage one of the group protesters chanting "We are the 99 percent!" and "Mitt! Mitt! Mitt!" during a campaign rally.