WASHINGTON -- Newt Gingrich's questioning of the "authenticity" of the Palestinian people and even whether they should be classified as a group has sparked a sharp debate within the Republican Party.

"Remember, there was no Palestine as a state – (it was) part of the Ottoman Empire," Gingrich told the Jewish Channel last week. "I think we have an invented Palestinian people who are in fact Arabs and historically part of the Arab community and they had the chance to go many places."

Several of his fellow candidates for the GOP presidential nomination called his comments unnecessarily provocative and ultimately unhelpful to the ongoing Israeli-Palestinian peace process. In foreign policy circles there has been no shortage of debate about the accuracy of the remarks and the former House Speaker's consistency on the matter.

On Monday, a political operative who has been working on Palestine-Israel policy for the past 20 years sent The Huffington Post a picture of Gingrich, then the House minority whip, grasping the hand of longtime Palestinian leader Yasser Arafat immediately following the September 1993 Oslo peace accords. 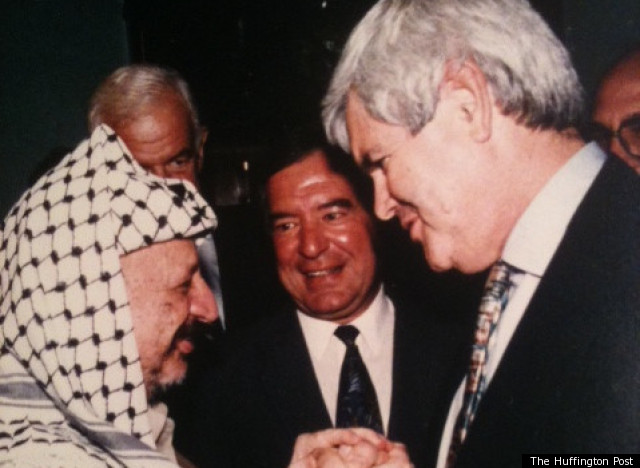 The embrace, the source said, came after Arafat met with 20 to 25 House leaders over coffee. Jotting notes down in a yellow pad, Gingrich used the meeting to pitch Arafat on how best to actually construct a Palestinian state. "He said, 'Look, here is what I think you need -- an economic plan – and here is how it will work,'" the operative recalled. "It was a very positive contribution at the time and as they stood up, there were pictures."

In the background of the picture is Rep. Nick Rahall (D-W.Va.), a long-serving Arab-American congressman, whose office confirmed that the meeting did take place.

At the time the picture was taken, relations between Palestinian political authorities and Israeli officials -- and those same authorities and U.S. officials -- were at a starkly different place than they are today. Arafat had attained an elevated status for having pledged to move away from his terrorist past. The Oslo Accords, which set up a process meant to end in a final agreement between the Palestinian Liberation Organization and the Israeli government, were being hailed as a historic breakthrough. U.S. politicians of all stripes were upbeat.

"I think if the elected head of the Israeli government and the leader of the PLO can find a way to get together and if they are joined by, as it seems possible, Jordan and maybe even some concessions by Syria, I think it would be pretty ridiculous for us to then back off and not at least try to help them make it happen," Gingrich told CNN ten days before that photo was taken. "I don't think we should pressure Israel. But if Israel decides -- the Israeli government decides it's going to try to do something, I don't think we ought to be in the position to block it."

But the situation was fragile. By March 1994, Gingrich and others were urging President Clinton to veto a UN resolution that referred to Jerusalem as occupied territory. Even earlier, leadership in the House and Senate had adopted resolutions declaring the city the undivided capital of Israel. Months later, the Clinton administration was proclaiming that it was "embarrassed" by a GOP-led bid to move the US embassy from Tel Aviv to Jerusalem. Doing so, they countered, would hurt the peace process.

With Israeli Prime Minister Yitzhak Rabin's assassination, the peace process only became more fraught. In April 1997, Gingrich was accusing Arafat of manipulating U.S. media organizations into "serving as [his[ witting or unwitting ally." Addressing the conservative, pro-Israel lobby AIPAC, he concluded that Arafat was "Israel's so-called partner in the peace process ... More than three years after Oslo, he still has not fulfilled his promise to amend the PLO charter and remove its call for the destruction of Israel."

By 1998, Gingrich was accusing Secretary of State Madeleine Albright of behaving as "an agent for the Palestinians" in renewed peace negotiations. U.S. diplomats complained that the Speaker was causing serious headaches even as he met, once more, with Arafat.

Asked to elaborate on his position on the Oslo Accords, Gingrich's presidential campaign provided some of the above quotes, underscoring a consistency in his approach to Israeli-Palestinian affairs -- primarily, that he has been inherently skeptical of Arafat and supportive of Israel.

"I think it is delusional to call it a peace process," he told the Jewish Channel last week. "We have an armed truce with a Palestinian authority that is relatively weak and on its flank is a Hamas authority which may become relatively weak because it can't deliver anything. Both of which represent an enormous desire to destroy Israel."

Still, as the September 1993 photo shows, there was a point in time where Gingrich did (literally) embrace Palestinian leadership and, at the very least, offered advice about creating a state for the same group of people he now refers to as inauthentic.