Over at The Hill, Christian Heinze snags video of Newt Gingrich lodging his economic complaint against the Obama White House with Fox's Bill O'Reilly. Obama, it seems, is running a "Paul Krugman presidency." Obama, Gingrich protests, "actually believes in" Paul Krugman's "left-wing economic ideas." "The only problem with them," he says, "is that they don't work."

Actually, there's a bigger problem! Here's a pro-tip for Newt Gingrich: If you want to argue that Obama is a dedicated follower of Paul Krugman, it probably shouldn't come hard on the heels of a Paul Krugman column in which Krugman intimates that Obama hasn't listened to a damn thing he's been saying, for years:

For the deal itself, given the available information, is a disaster, and not just for President Obama and his party. It will damage an already depressed economy; it will probably make America’s long-run deficit problem worse, not better; and most important, by demonstrating that raw extortion works and carries no political cost, it will take America a long way down the road to banana-republic status.

The worst thing you can do in these circumstances is slash government spending, since that will depress the economy even further. Pay no attention to those who invoke the confidence fairy, claiming that tough action on the budget will reassure businesses and consumers, leading them to spend more. It doesn’t work that way, a fact confirmed by many studies of the historical record.

Leaving aside who's right on the merits between Krugman's take and Gingrich's own viewpoint, it's painfully clear that the idea that Obama can, in any dimension, be called a Krugmanite is pretty laughable on its face. And all you really need to do to discern that is ... read Paul Krugman's columns! Krugman has repeatedly tried to make Obama go to Keynesian rehab, but the POTUS has said, "No, no, no."

Alternatively, you could have a passing familiarity with a magazine called Newsweek. 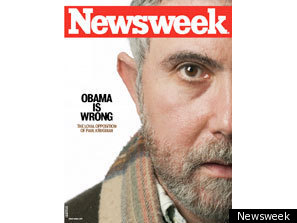 I'll make two observations about this. First, when I chided Chris Cillizza for assuming that the debt ceiling deal would allow Obama to brand himself as a "deficit hawk" and forever distance himself from being thought of as a "liberal" or a "socialist," I wasn't just pissing in the wind. Obama's dedication to frustrating Paul Krugman is no impediment to anyone criticizing Obama for being a Krugmanite.

As for Newt Gingrich ... haven't I been alluding to his scatterbrained, aloof-from-reality ways all along? This is a guy who writes a book about how Obama is running a "secular-socialist machine" one minute, and in the next signs up to participate in that secular-socialist machine the next. So what kind of "campaign" is Gingrich running? The answer is that he's running a fake campaign for president, and a real campaign devoted to P.R. for Gingrich, Inc.

At any rate, what does Paul Krugman think of this? TPM's Benjy Sarlin asked him:

"If only!" Krugman replied by email, when asked about Newt's claim by TPM.