WASHINGTON -- Newt Gingrich may be mired in single digits in the national polls, but influential Republicans in the early primary and caucus states are warming to his candidacy. The latest Power Outsiders survey shows that, although Mitt Romney is still seen as the most electable candidate and best on the economy, Gingrich wins plaudits for his knowledge, experience and positions on other contentious issues.

The weekly GOP Power Outsiders poll, conducted by The Huffington Post and Patch, reaches out to local political activists, party officials and officeholders to observe the critical "invisible primary" that is usually a strong leading indicator of voters' preferences in presidential nomination contests. This week, we interviewed 171 Power Outsiders, including 47 in Iowa, 58 in New Hampshire, 54 in South Carolina and 12 in Florida.

We asked them to choose the best candidate on a series of issues and characteristics. Romney begins with a large advantage on a critical issue: the economy. More than one-third (38 percent) say Romney would do the best job there, followed by Gingrich (19 percent). Herman Cain, Ron Paul, Rick Perry and Jon Huntsman run in a near tie for third (with 11, 10, 9 and 8 percent respectively). Romney also leads Gingrich on taxes, albeit narrowly (23 to 18 percent). 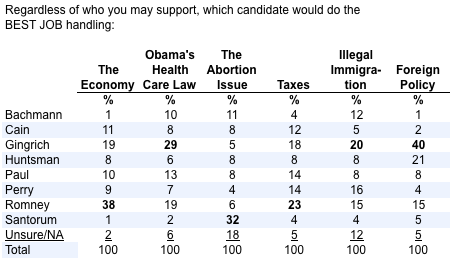 A second set of questions about more general characteristics illustrates both the underpinnings of Romney's current support and Gingrich's emerging stature. The insiders surveyed overwhelmingly see Romney as most electable -- 50 percent choose him as the "best able to defeat Barack Obama," to 14 percent for Cain, 9 percent for Perry and just 8 percent for Gingrich and Huntsman. Romney holds a narrower lead over Gingrich on "being a strong leader" (32 to 25 percent), with the other candidates running far behind. 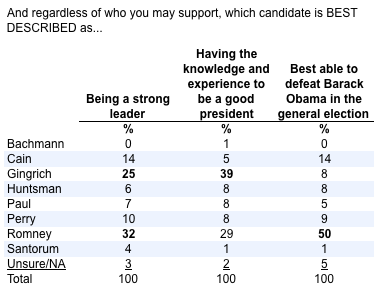 Yet Gingrich bests Romney and the rest of the field on one critical dimension. He holds a 10 point lead over Romney (39 to 29 percent) on "having the knowledge and experience to be a good president."

Which of these issues or characteristics matters most? We asked the Power Outsiders to choose the two they consider most important in guiding their decision about which candidate to support. Not surprisingly, the economy leads the list, with 50 percent choosing it as their first or second choice. But nearly as many selected the ability to beat Obama (42 percent), followed by knowledge and experience (33 percent) and being a strong leader (25 percent). 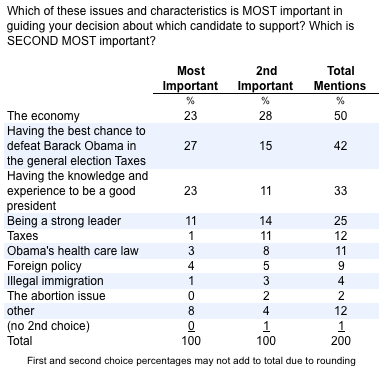 This week's results hint at a change in perceptions of Herman Cain. Last week, roughly one quarter of the Power Outsiders interviewed either endorsed Cain (3 percent) or said there was a "good chance" they would ultimately support him (24 percent). But this week, Cain never scores better than 14 percent when pitted against the other candidates on specific issues and characteristics.

This survey also comes with an important footnote: Not surprisingly, Romney scores higher on most questions among the 58 Republican activists and officials interviewed in New Hampshire, where he has long held big leads in polls of all voters. Among the New Hampshire respondents, Romney runs far ahead of Gingrich on not just the economy and electability, but also on characteristics such as experience and leadership. 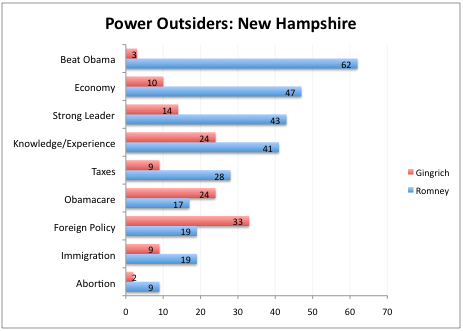 But among the 101 Power Outsiders interviewed in Iowa and South Carolina, Romney's support is far more tenuous. Gingrich leads narrowly on leadership and experience and widely on issues like "Obamacare," foreign policy and immigration. Gingrich's key weakness remains electability, where Romney leads him by nearly 5-to-1 (46 to 10 percent). 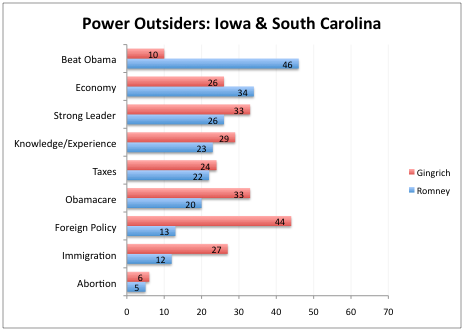 Put together, these results explain why Romney won the most support, as of last week, among the Power Outsiders. They perceive him as best on two issues they care most about: the economy and beating Obama.

These findings also underscore why Romney's hold on activist Republicans remains tenuous and why Gingrich may be emerging as an appealing choice, particularly in Iowa and South Carolina. The Power Outsiders agree more often with Gingrich on issues like health care and immigration and, more importantly, see him as the most knowledgeable and experienced candidate in the field. We call them Power Outsiders, but they are really insiders within their communities who are likely to value political experience.

Gingrich is still handicapped by the perception that he would make a weak candidate against Obama. Nothing else unites Republicans as much as their antipathy to the president. As one New Hampshire respondent put it, "beating Obama MUST be the goal. Period."

But the early primary contests sometimes alter perceptions of electability. If a candidate like Gingrich can find a way to win in Iowa or South Carolina, those judgments might change.

Our surveys are not a scientific random sample of any larger population but rather an effort to listen to a swath of influential, local Republican activists, party leaders and elected officials in Iowa, New Hampshire, South Carolina and Florida. All of the individuals listed below have agreed to participate in the surveys, although not all responded to this week's questions. Interviews were conducted between Nov. 4 and Nov. 8, 2011.