WASHINGTON -- A slew of new polls shows Newt Gingrich leading the race for the Republican nomination, both nationally in three of the first four primary and caucus states. However, a close reading of both the recent polls and a recent focus group of Republicans shows that rank-and-file Republicans are far from a final decision.

Gingrich has certainly experienced a surge in support. Two new national surveys from Gallup and Fox News now show Gingrich with support in the mid-30-percent range and a wide lead over Mitt Romney and the rest of the Republican primary field. The current estimate produced by the HuffPost Pollster chart, which is based on all available public polls, gives Gingrich a lead of 37 to 20 percent over Romney, with the rest of the Republican field in single digits. 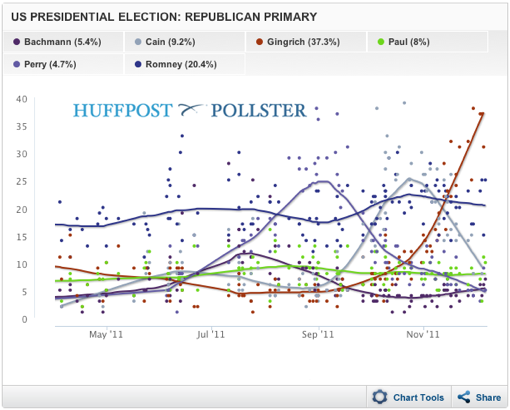 The rise in support for Gingrich has also been evident in the early primary and caucus states. Gingrich now leads on a half dozen new polls in Iowa, and three recent surveys in South Carolina. The former speaker is leading by even wider margins on recent polls in Florida conducted by Quinnipiac University, CNN/Time/Opinion Research Corporation and PPP.

Romney continues to lead in New Hampshire, but the most recent CNN/Time/ORC poll shows his support falling from 40 percent in late October to 35 percent last week. Meanwhile, support for Gingrich in New Hampshire has jumped to the mid-20-percent range on four recent surveys.

Although a plurality of Republicans now prefers Gingrich nationwide, it is also evident that most Republicans remain uncertain about how they will vote in their primaries or caucuses next year. The CNN/ORC poll conducted in late November, for example, found just over a quarter of Republicans (27 percent) said they would definitely support their first choice, with the rest either willing to change their minds (67 percent) or still completely undecided (6 percent).

Decision-making is farther along in the early primary and caucus states, but not by much. The Time/CNN surveys found just over a third of Republicans (between 34 and 39 percent) willing to say they are certain to support their first choices in Iowa, South Carolina and Florida, and only slightly more (44 percent ) in New Hampshire.

A focus group of Republican primary voters, conducted last week by veteran Democratic pollster Peter Hart as part of a series sponsored by the Annenberg Public Policy Center of the University of Pennsylvania, helps put these results in context.

While a focus group is not a survey -- its non-random recruitment and small sample size cannot provide a statistically representative view of any larger population -- the 12 voters from suburban Fairfax County, Va., who participated provide a richer view that helps flesh out the survey findings.

The Republicans in Hart's focus group found much to like about Gingrich. Virtually all rated him as highly competent, someone who they described variously as "experienced," a "great debater," the "smartest one running," someone who "stands firm in his beliefs," "get things done" and can "completely turn the ship around."

They were less enthusiastic about Romney, but still had praise. They lauded his "family values," said he "did a nice job at the Olympics" and as governor of Massachusetts, and called him a "politician" who is "good at it."

But the participants could also list many thing that troubled them about both Romney and Gingrich. Regarding Gingrich, some expressed concern about his personality, that he's "careless and combustible" or that "he's behaving himself in this campaign right now and saying what he's supposed to." Some participants worried that "his hands are already too dirty...with his experience and how he got there" or that "he has been in side the Beltway for a long time." Still others feared he might "give up some of his beliefs to get things done," that "something will come up in his marriage," or that "issues with his affairs will blow up like Clinton."

Misgivings about Romney began with the perception that he "goes with whatever people want to hear," and is "wishy-washy," "vanilla" or "manufactured." They complained that "he doesn't have the conviction, too phony," that he will "flip-flop," is a "R.I.N.O. -- Republican in name only" and that "repealing Obamacare will not be a priority."

In short, while these voters were more enthusiastic about Gingrich, it was also clear that they remain in the process of making a decision and are far from decided. When Hart asked whose vote was still "up for grabs," half raised their hands. At the same time, many indicated they had already narrowed their choices to some degree. Most, for example, said they had already ruled out supporting Herman Cain -- who dropped out of the race two days later -- and others had ruled out Paul or Perry, or even Gingrich or Romney.

The narrowing of choices among Republicans is also evident in a national Gallup survey completed a week ago. They found that majorities of Republicans consider only Gingrich (62 percent) and Romney (54 percent) to be "acceptable" nominees for president. Even though four out of five Republicans now recognize Rick Perry, Ron Paul and Michele Bachmann well enough to rate them, between 52 and 58 percent of respondents now regard these candidates as "unacceptable" presidential nominees. 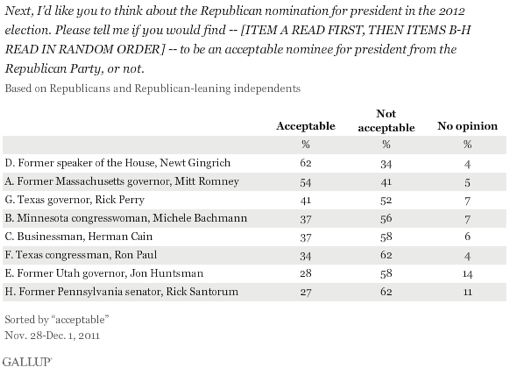 Last week, Peter Hart reflected on the fact that, while only two focus group participants walked in as Gingrich supporters, 7 were ready to vote for him on the way out. "Here we are a month away," Hart said. "Boy there's gonna be a lot of volatility."

The survey data says he could be right.