WASHINGTON -- Newt Gingrich may be at the top of national polls, but he has a long way to go in terms of his campaign organization, according to influential local Republicans in the early primary and caucus states. In the latest Power Outsider survey, there are no respondents in either Iowa or New Hampshire who rate the Gingrich campaign as their state's strongest.

The weekly GOP Power Outsiders poll, conducted by The Huffington Post and Patch, also found that while Mitt Romney wins plaudits for the strongest organization in New Hampshire, the respondents rank his campaign far lower in Iowa and South Carolina. And in Iowa, the candidates with the fewest endorsements and the least support in public polls -- Ron Paul, Michele Bachmann and Rick Santorum -- are seen as having the strongest campaign organizations.

The Power Outsiders poll is an ongoing effort to reach out to local Republican activists, party officials and officeholders in the early primary and caucus states to observe the critical "invisible primary" that is usually a strong leading indicator of voters' preferences in presidential nomination contests. This week, we interviewed 170 Power Outsiders, including 48 in Iowa, 51 in New Hampshire, 58 in South Carolina and 13 in Florida.

This week's survey focused on perceptions of the campaigns, and included a question asking simply: Which candidate has the best campaign organization in your state? The results, shown in the table below, vary considerably by state. In Iowa, Ron Paul leads the way, with 35 percent judging his campaign as strongest, followed by Michele Bachmann (21 percent), Rick Santorum (15 percent) and Rick Perry (8). Again, the two national frontrunners, Mitt Romney and Newt Gingrich, rank near the bottom. 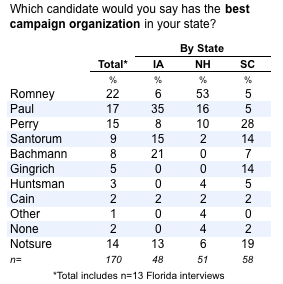 Romney gets the highest marks for organization in New Hampshire, where 53 percent of the Power Outsiders name his campaign as the strongest. No other candidate comes close, but the fact that Ron Paul ranks second (with 16 percent) may surprise some.

One caution about these results: We asked our respondents to name the strongest campaign in their state, rather than asking for a rating of each individual campaign. So perceptions of the campaigns that do not rank first may be stronger than these numbers make them appear.

Make no mistake though, the activists, party and elected officials we interviewed continue to believe in the importance of grass roots organization. On a question at the end of the survey, 78 percent of the Power Outsiders said they consider a strong grass roots campaign essential to winning their state, while just 19 percent say it is not essential. 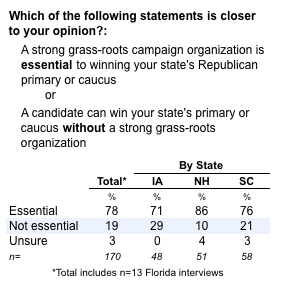 As shown in the table below, contact with the campaigns is quite high. Virtually all (98 percent) reported having been contacted by at least one campaign, with most reporting contacts by multiple campaigns (5.5 on average). All but Jon Huntsman have contacts rates of 69 percent or better with our Power Outsider universe. 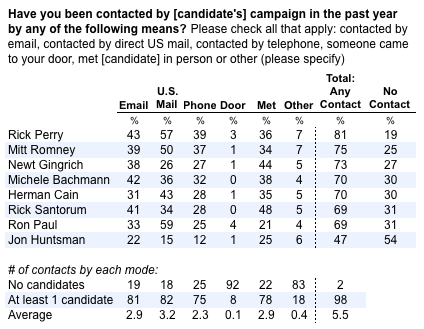 What really set the Power Outsiders apart are their personal meetings with the candidates. More than three out of four (78 percent) say they have personally met at least one of the candidates in the last year, with most meeting several (2.9 on average). It helps to live in one of the early primary or caucus states of course, but the degree of personal contact speaks to the candidates' level of political activism.

Personal meetings aside, the Power Outsiders also remain far ahead of ordinary voters in reporting other forms of contact with the candidates. Two recent Bloomberg News surveys of likely Republican voters asked nearly identical questions about contact with the campaigns in Iowa and New Hampshire. As the following table shows, the rate of contact reported by the Power Outsiders for each of the candidates is typically two to three times that reported by ordinary likely voters. 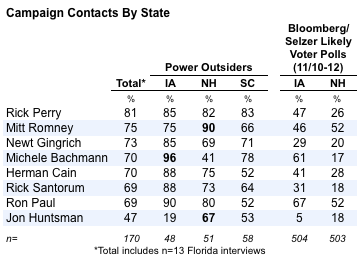 Still, the results from this week's survey show a fundamental paradox: In Iowa and South Carolina, the most attentive local insiders in the early primary and caucus states say the best campaign organizations belong to candidates who are a long way from frontrunner status. The question of whether the Paul and Bachmann campaigns can produce enough support to stay competitive in the Iowa caucuses may turn out to be one of the most important for the 2012 campaign.

Our surveys are not a scientific random sample of any larger population but rather an effort to listen to a swath of influential, local Republican activists, party leaders and elected officials in Iowa, New Hampshire, South Carolina and Florida. All of the individuals listed below have agreed to participate in the surveys, although not all responded to this week's questions. Interviews were conducted between Nov. 18 and Nov. 22, 2011.