This week's Animal Oddity calls to mind the phrase "nature, red in tooth and claw" coined by the poet Alfred, Lord Tennyson in his poem In Memorium A.H.H..

The phrase refers to the brutality of nature when creatures are pitted against each other for survival.

This video of an American bullfrog trying to eat a rough-skinned newt is a great illustration of that and also reminds us that wild animals have more tricks up their sleeve when it comes to survival than teeth and claws.

While it's easy to anthropomorphize the behavior of wild animals and make value judgments based on our own human sense of morality, the reality is that such notions are completely irrelevant to the natural world.

The newt is no more a villain than is the frog. Each is simply doing what instinct and evolution have equipped them to do: survive. While that might seem odd and brutal to us, it's just nature being nature.

That said, there is something here that does require human value judgment. This video was shot in California, the native habitat of the rough-skinned newt. The bullfrog is native to eastern North America but was introduced by people into new ecosystems far outside its natural range, including California, where the species has become a troublesome invasive exotic.

While there's nothing diabolical about the bullfrog doing what's in its nature, this video illustrates the negative ecological consequences of humans carelessly redistributing species around the planet. 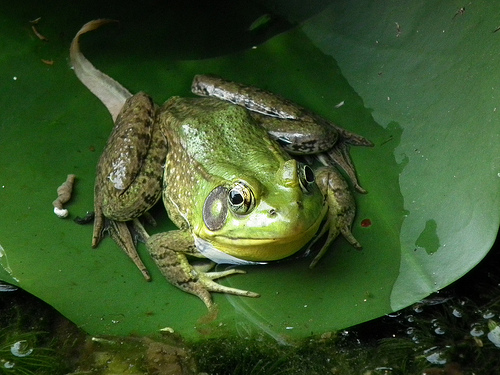 In most cases, the bullfrog would have won out. As the continent's largest frog species and second largest amphibian (the hellbender is the largest), bullfrogs are powerful predators that will eat anything smaller than themselves that they can fit down their large mouths.

Native creatures typically have no natural defenses against predatory invasive exotics and almost always lose out. In the case of bullfrogs, they are directly responsible for the decline of many native species of the West, including the Chiricahua leopard frog, the California red-legged frog, and the California tiger salamander, among others, either by eating them, out-competing them for food and habitat, or by spreading disease.

But the video above illustrates an odd twist in the ongoing struggle of native species against invasive exotic species. Turns out that rough-skinned newts have toxins in their skin to which the bullfrogs have no natural defense because they didn't evolve alongside this species of newt.

Again, this isn't a judgment on either the bullfrogs or the newts; they're just doing what comes naturally. Where judgment is appropriate is on careless human actions that introduces exotic species that interrupt and destabilize healthy ecosystems.

Find out more about how to control and manage invasive exotic species from the National Wildlife Federation and, as always, get the latest odd animal news, stories and behaviors on my Animal Planet blog, Animal Oddities.

Photo of bullfrog by BulletMiller via Flickr Creative Commons.