Two years ago this coming Sunday, 20-year-old Adam Lanza invaded Sandy Hook Elementary School in Newtown, Connecticut, armed with a semi-automatic assault rifle and other weapons. He killed 20 children and six educators. He also killed his mother, and himself.

After Sandy Hook, there was an initial push to strengthen gun laws on a federal level, but a widely supported background check bill that gained traction right after the shooting ultimately went nowhere. President Barack Obama put forth proposals to ban some military-style assault rifles and limit the size of ammunition magazines, but those measures also failed. And a Pew Research poll released this Wednesday found that Americans favor gun rights over gun control for the first time in 20 years.

The Law Center To Prevent Gun Violence points out on its website that a straight comparison of laws strengthening and weakening gun restrictions may not paint a complete picture, since some laws have a greater impact than others. The group notes:

For example, a bill that allows states to keep private the information of concealed-weapon permit holders cannot be equated with a bill that strengthens background checks or bans assault weapons, the Law Center says. One has a minimal impact on gun regulation, while the other represents a significant change.

Overall, the Law Center says, "the data shows us that the public’s mobilization after Newtown resulted in real and sustained change in legislative outcomes."

Last year, Mother Jones analyzed data from the Law Center and found that one year after Newtown, a majority of Americans lived in states that had tougher gun laws than before the shooting.

The map below reflects the time period between December 2012 and May 2014. It shows which states have enacted more laws to tighten gun restrictions than to weaken them -- and which states have done the opposite.

Where Gun Regulations Have Gotten Stronger Or Weaker Since Newtown 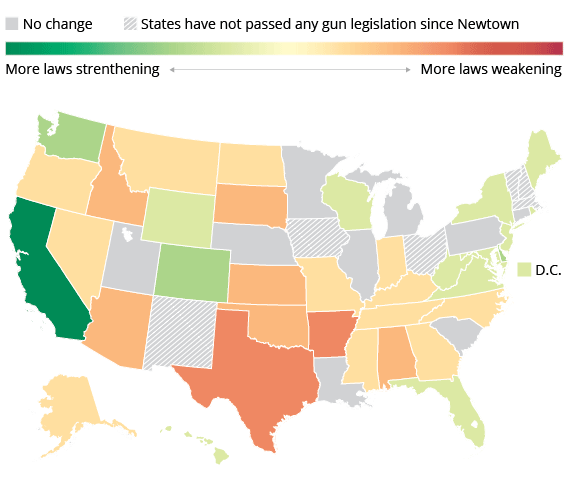 The guns Lanza used during the shooting -- two semi-automatic handguns and a semi-automatic rifle -- were registered to his mother, who purchased them legally. Connecticut's gun control laws at the time already prohibited Lanza from owning a gun. He was not yet 21, the age limit for owning a handgun in the state. It's also illegal in Connecticut to bring a gun onto school property, unless a school official gives permission.

These laws didn't stop Lanza, and so, following the shooting, President Obama, along with legislators from around the country, also called for a renewed focus on the state of mental health care in the U.S.

According to a November report from Connecticut’s Office of the Child Advocate, Lanza showed signs of various mental illnesses throughout his life. He was diagnosed with Asperger's syndrome and obsessive-compulsive disorder. The report describes Lanza's history of treatment for mental health issues, as well as the special education programs he was placed in. "It is vital to note that [Lanza] was completely untreated in the years before the shooting and did not receive sustained, effective services during critical periods of his life, and it is this story that the report seeks to tell," the report says.

The report notes that the majority of mentally ill people, as well as people with autism spectrum disorders, are not violent. (This is also a point that numerous advocates emphasized in the aftermath of the Sandy Hook shooting.) Similarly, the authors stop short of placing blame on the educational or health care systems for Lanza's lack of treatment. "There is no way to adequately explain why [Lanza] was obsessed with mass shootings and how or why he came to act on this obsession," they write. "In the end, only he, and he alone, bears responsibility for this monstrous act." 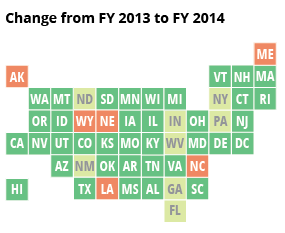 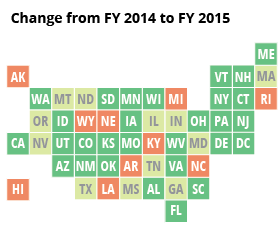 After Sandy Hook, state legislators were quick to allocate more money for mental health care, leading to a surge of funding that also included the Medicaid money made available to states with the Affordable Care Act, according to the National Alliance on Mental Illness. (Medicaid provides much of the funding for public mental health services.) Heading into 2015, however, some states have started cutting their mental health care budgets once more.

Still, as the nation and the Newtown community continue to move on from Sandy Hook, there are a number of state bills addressing gun restrictions in various stages on the desks of legislators across the country. These bills reflect local and regional groundswells of support for gun legislation following the tragedy at Sandy Hook, particularly bills involving mental health concerns. This year, both South Dakota and Arizona enacted bills that require reporting mental health records to the FBI for background checks.