The Newt Gingrich campaign enjoyed a terrific surge from late November to mid December, but the base that suddenly materialized is now melting faster than the winter snow. Gingrich has failed to capitalize on his late-year bump -- because he failed to nurture a solid base among real people, and our social media data shows it.

Now, just days after his campaign failed to qualify for the Virginia primary (apparently because a staffer turned in 1,500 fraudulent signatures), new social media data reveals just how ephemeral and media-manufactured Gingrich's bump was.

Gingrich enjoyed a terrific November and December, according to the pollsters. That said, virtually every piece of evidence in the social networking space indicates that Gingrich's head of steam is bound to evaporate - indeed it may already have. His support in the social sphere is thin and anemic. And when the going really gets tough in Iowa or New Hampshire or South Carolina, his base, such as it is, looks to be unreliable and dispassionate. Neither Mitt Romney nor Ron Paul have this problem, and therefore both have real staying power.

According to our analysis, on his strongest platform, Twitter, Gingrich is particularly weak. Almost half of his followers on Twitter are overseas, and half are inactive -- and of the few who are relevant (active and in the U.S.), only a miniscule number are engaged.

The polls may have shown a rise in Gingrich's fortunes, but on a day-in and day-out level, the social networks are where Americans are showing what they're interested in. Gingrich hasn't hit critical mass there yet. We don't think he (or anyone) will be a credible candidate until he does.

Struck by allegations that Newt Gingrich purchased 80 percent of his Twitter followers, we decided to dig into the evidence in the wake of his recent surge by working with data collected by Colligent on the Republican presidential candidates over a six-month period beginning in June of this year. (Colligent looks at more than 300 million social network profiles and aggregates the data to show trends).

But when we drilled down into this audience and conducted an analysis of location data and engagement levels, the numerical equality between the two candidates falls apart, and Gingrich's fan base begins to look very weak. In general, Gingrich's social networking growth rate is among the lowest of the candidates. He has added a smaller number of followers over time than his rivals, and his fans are less engaged than Romney's or Paul's. 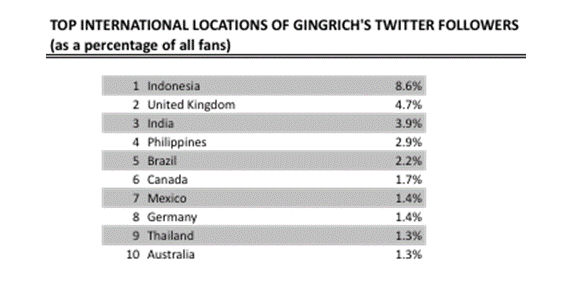 Of those in the U.S. where we could find location information, we found only 549 followers in Iowa -- or 0.73 percent of his U.S. followers.

Romney doesn't have that problem on Twitter -- 93 percent of his Twitter followers are in the U.S. And 1.2 percent of them are in Iowa. (Paul is similar).

So let's start, then, by cutting Gingrich's level of Twitter support in half. That's still 700,000 followers, right?

Unfortunately for Gingrich, Twitter's CEO says only about half its users are active (i.e. log in at least once a month). And only a quarter of them log in daily. So, if we're being generous to Gingrich, he has about 350,000 Twitter followers who might look at his tweets sometime during any month.

And then there's the portion of his followers that never engages with him -- i.e., re-tweets him or uses his hashtag. Our data shows that less than one-quarter of one percent of his Twitter followers engage in any reciprocal activity with Gingrich's Twitter feed. For most of his followers, it looks like Twitter is just an irrelevant blip of 140 characters from Gingrich. In contrast, Romney's Twitter followers are much more engaged -- 5 percent either retweet him or use his hashtag.

Finally, we looked at core groups of Republicans on issue-related social networking sites -- like Crossroads or Focus on the Family. Rather than just looking at how many of their fans also liked Gingrich or Romney or Paul, we wanted to see if there was strong mutual overlap between the candidate and the group.

By this criterion, Romney and Paul have a much stronger hold on groups of issue-oriented Republicans than Gingrich. Paul's strain of libertarianism leads to robust strength among clusters of Americans who support gun rights and oppose the health care bill. Romney's mainstream aesthetic appears to attract Republicans who flock to national security and fiscal causes. But Gingrich, by contrast, has not solidified a connection with any ideological bloc.

By every measure, it's just not happening for Gingrich.

And... whatever the outcome of these early Republican primaries, come the summer and fall, the victor is going to have to face the big guns: Obama's 24 million-plus Facebook fans and 11 million-plus Twitter followers. We'll take a look at them in early 2011.

Graphs were created by Victoria Bassetti using the raw data from Colligent.

Victoria Bassetti heads Colligent's political unit. She was the head of consumer insight for EMI Music NA and prior to that worked on the Hill for eight years.