PHOENIX, AZ -- It was 2008 all over again Wednesday night as Organizing for America (OFA), formerly Obama for America, launched their cross-country "Reform Health Care Now: Let's Get It Done Tour" from Arizona, a state that has becoming a focus of the Democratic Party.

The event had all of the trappings of a political campaign rally. Songs from Obama's 2008 presidential campaign blared from a PA system as more than a thousand Obama supporters filed in. Dozens of volunteers roved the crowd signing up new volunteers to phone bank, knock on doors, and do visibility in the street. The Obama logo and health care reform slogans were everywhere -- on the bus, on rally signs, on tee shirts, even on a dog sweater. 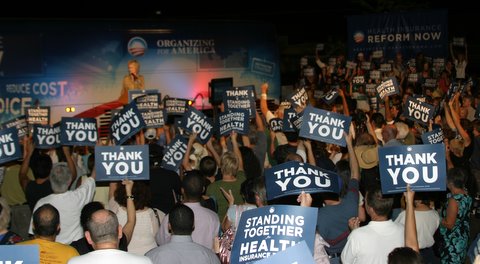 Meanwhile, just around the corner (less than a mile away), Obama's former presidential campaign rival, Senator John McCain, hosted a town hall for a raucous crowd that alternated between booing and cheering. One protester had to be forcibly removed when she kept interrupting the town hall by shouting. The crowd was divided between those who adamantly support health care reform (about one-third of the crowd) and those who adamantly oppose it (about two-thirds of the crowd), and both sides were vocal throughout the town hall.

Across the street from the OFA bus tour kickoff rally, about 25 anti-reform protesters gathered on the sidewalk to sound off against health care reform, and on the sidewalk on the rally side of the street, about 50 of the rally-goers lined up to chant lines like, "Hey ho! Hey ho! The status quo has got to go!" Several police officers were stationed between the groups, and the two sides bantered back and forth, but both sides stayed calm and kept the busy street between them.

The opening speaker told her own personal health care story. She was injured the same day as a professional athlete. She followed his progress in the news over the next couple of months as he received treatment, had surgery, and recovered. Although she had the same injury, she says she was forced to go without treatment for a few months because her health insurance company denied her claim. Just as paralysis was beginning to set in, a relative who works for a law firm that practices medical malpractice intervened, and she was able to have the surgery and treatment she needed.

Several local public officials also spoke, and the National Director of OFA, Mitch Stewart also addressed the crowd. Democratic Arizona Representative Kyrsten Sinema, who is a member of Obama's Special Task Force on Health Reform, told the crowd that most Americans want health reform but that many have been frightened by misinformation circulating around the issue.

"We need your voice!" Sinema told the crowd, "The people with the misinformation and the lies are the ones in front of the microphone, and they're making people afraid of what they want, what we all need."