I recently was laid up with tonsillitis, which came with a very high fever -- it actually reached 105.4 (go to the hospital if your fever stays this high). At this point, the slightly terrified friend who was taking care of me suggested his mother's apple cider vinegar sock trick.

Smelly vinegar on my feet? Now, in any other state I may have objected to this, but I'm passing it on because it really seemed to work. I also found four additional medicinal ways to use this magic stuff. The jury is still out on whether it is the cure-all we all are looking for, but several studies around the world suggest good things. 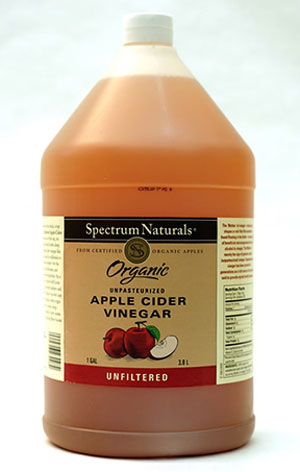 First of all, if you are the one sick, its better to have someone else do this. Take two thick socks (knee socks are best - more coverage) and dip them in a mixture of one part apple cider vinegar and two parts water. Squeeze out excess liquid. Put on feet, pulling up as far as possible. Wrap plastic bags around them. Leave on 10-15 minutes (at this point the socks will be warm and nearly dry). Repeat several times. We can call this green, as it is a natural remedy, but the disclaimer is I was also on Penicillin and Alka-Seltzer...but I really think this did the trick. Could be a substitute for over-the-counter medication for lower fevers. (Not sure about the science behind it: I was told the vinegar sucks the fever down to your feet, where it is easier to release heat.)

2) Vinegar Helps Prevent Weight Gain
According to a recent Swedish study, people who consumer vinegar with bread during a meal are satiated faster -- as in they need to eat less to be full, and therefore consume fewer calories.

3) Vinegar Works as a Cough Syrup
Mix equal parts honey with apple cider vinegar. Swallow down as much as you can and feel the vapors zap your clogged sinuses and cut down the phlegm. 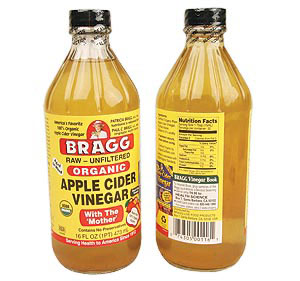 4) Vinegar as a Cure to Acid Reflux
Drink a glass of water mixed with a teaspoon of apple cider vinegar either before or during a meal. Even though it's an acid, vinegar apparently tells your stomach to stop producing more unecessary acid and helps balance things out. According to the Mid America Heart Institute and University of Missouri-Kansas City, vinegar also helps reduce the post-meal blood sugar spike.

5) Vinegar Helps Fight Acne
Wipe diluted apple cider vinegar on skin. Rich in alpha-hydroxy acids, it works as a toner, balancing the PH of your skin and removing dirt, makeup, and fatty deposits. It is also said to help acne scars heal.

Also check out TreeHugger for 62 Uses for Vinegar.

Do you have alternative medicine that you swear by? Comment below!

More on Vinegar from

::62 Uses for Vinegar
::Vinegar, a Green Substitute and Getting Rid of Cat Pee
::How to Sweat Without Staining
::Biodynamic Balsamic
::TH Tip: Unclogging the Drain