I spotted her in the women's locker room at the YMCA. Her gait, the aide by her side, and her difficulty with following directions and figuring out how to sit, alerted me. "She probably has dementia." As I was making my way out, I heard the helper ask her to wait, right here on the stool by the showers. I stopped and waited a few seconds. I knew there was possible danger. Sure enough, I noticed her starting to stand. I casually made my way to her and introduced myself. She seemed already tired from just a few seconds standing. The aide had gone to the bathroom. I asked if she maybe would like to sit. She said yes, and I helped guide the stool right underneath her. She sat down, and I kneeled by her side. I found out she was 80 years old and was "living at home with Anna, because of my Alzheimer's". She talked about not being able to see, and how her left shoulder had been operated and caused her much pain. She then proceeded to tell me about her ailments. Her other shoulder that was hurting too, and her right knee that had been replaced. Her three back surgeries. She asked where was my accent from, then told me about her own story, about coming from Germany when she was 24. 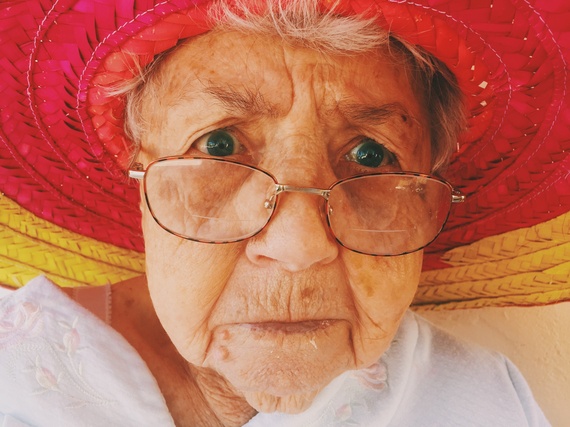 Now, imagine if I had not stepped in, and she had gotten stuck standing up for what would have felt like an eternity. Imagine how fatigue would have soon gotten the best of her, and how she would have tried to sit, missed the chair, and fallen on the hard tiles. She could have risked another fracture, and at a minimum a big, painful bruise. That episode made me think of how different life would be for those with dementias and those caring for them, if strangers around them would keep an eye, and lend a hand whenever necessary. Of course the first step is to educate the general public about dementia. You and I can only help if we know dementia when we see it. Dementia is not just about not remembering things. Instead, dementia can impact one's ability to function in a myriad of other ways.

1. Difficulty initiating and sequencing tasks
This includes tasks of every day living. My YMCA friend needed prompting from her aide to start undressing and carry on with each step.

2. Difficulty with movement
Dementia can render the body slow or stiff. It can affect only one side, or one limb. In the situation above, the woman was shuffling, and her body was stiffer on one side. Persons with dementia can be at high risk for falls.

3. Visual difficulties
Dementia can make it difficult to locate objects in cluttered environment. Or it may cause visual illusions, for instance seeing animals in a busy floor pattern. My friend had trouble locating her body in relationship to the stool.

4. Language problems
Dementia often affects language. Maybe the person knows what they want to say but the words don't come out right, or they cannot follow a conversation that is going too fast.

These are just a few examples of the many ways in which dementia may manifest to knowing eyes and ears. If you suspect someone near you is in distress or at risk of being unsafe because of possible dementia, do not hesitate to offer your support, meanwhile being sensitive to not shaming the person. After all, dementia is just like any other disability. It does not take away the humanity of the person. May you become part of the larger movement of dementia friends and dementia-friendly communities: 10 million of persons with dementia and 16 million family members could use your help.