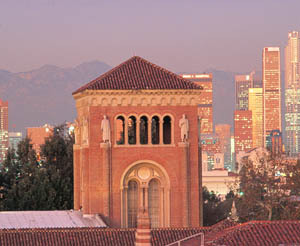 I was recently on the west coast for a few days visiting the University of Southern California and the weather really wasn't what I was expecting. I stepped off the aircraft at LAX and suddenly found myself encountering a thunder and hail storm of Biblical proportions. But a few hours later the downpour had disappeared and was followed by a quite wonderful experience. A walk onto the campus of USC in that beautiful clear washed sunlight that only California seems able to produce. It was a surprising and engaging start to a visit that would introduce me to some educational developments and thinking that I found to be really quite extraordinary.

The USC campus reminds me in many ways of Disneyland. Its various disciplines occupying their own academic theme parks with appropriate architecture--Gothic, Roman, Renaissance, and Modernist. It's a beautiful "treeful" campus of wide boulevards and throngs of students and more roller and hover boards than I have ever seen. The School of Music, my destination, was founded in 1884 and became the Thornton School in 1999 honoring Flora L. Thornton's gift. It occupies a number of independent buildings including a concert hall, as well as facilities for faculty studios and teaching, ensembles, and recording all within one small block. Across the street is the new Glorya Kaufman School of Dance, which is just being finished and will be a major addition to the campus. I saw one of the first performances, a dance collaboration with the Music School in a project led by the great Bill T. Jones. Several of the school's composers had specially written a number of short new works for the performances, which literally took the audience by storm. If this is the standard we can expect from the very first year of dance freshmen, what will see in a few years' time? 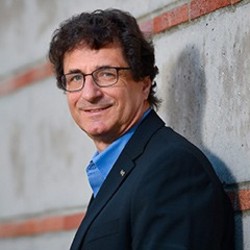 Rob Cutietta (in photo right) is the Dean of Thornton, and he has a great deal on his plate. Having very successfully run the Music School since 2002, he is now also the Dean of the new Dance School. He is a committed and passionate educationalist with a reputation as one of the most creative and innovative thinkers in the field. Cutietta is also a prolific writer and in recent years has produced five books, all on Education or the Psychology of Music. Since 2006, he has hosted Ask the Dean, a popular weekly segment on Classical KUSC, the largest classical music station in the nation. During his tenure he has made a difference not just to the development of the School but also to the wider field of music education. The new work he is involved with at the present might well have the effect of creating a new paradigm for the teaching of music in Higher Education. But I am getting ahead of my story. Let me do a bit of scene setting first.

It is always interesting to analyze how change happens. There is the revolutionary model, storming the Bastille of orthodoxy and establishing, however brutally, the brilliant ideas of the new regime. But as we know this approach tends to suffer from the syndrome "everything must change in order for everything to remain the same." As the French so succinctly put it "plus ça change..." Or there is the much slower and less violent process that fosters and values systemic change. With process you have the advantage of hearing all voices, providing a platform for involvement and eventual ownership, which can create permanent and positive change. It just takes longer and requires not only patience but also a refined sense of managing the politics of change. Cutietta is just such a Higher Education manager who leads with a clear vision and a keen eye for what relationships are important to nurture and which discussions are absolutely essential. 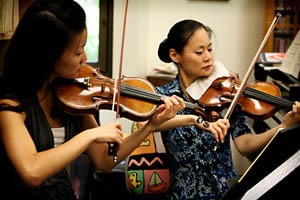 The results at USC are very impressive. Always well regarded, the Classical Division has gone from strength to strength. It boasts star faculty such as Ralph Kirshbaum, Midori Goto (in Ian Evenstar photo on the right), Andrew Shulman, and Glenn Dicterow; excellent programs in orchestral and chamber music; and an opera department that mounts two major productions (in Kristina Jacinth photo below right) a year. It is a School that, in classical music terms alone, can rival the best in the world. And it recruits the finest students as a result. 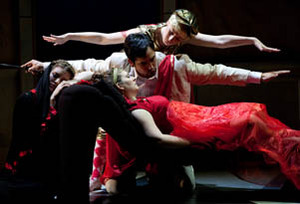 But this is not where Cutietta has as yet promoted his "revolution" of change. That distinction goes to the Contemporary Music Division, which refers not to the usual category of classical contemporary music, but to the music that seems to inhabit all our waking moments from film scoring to pop. I like this new use of the term "contemporary" as in many ways it throws out a challenge to our normal way of perceiving and hearing the music world. All too often we dismiss "other" music that is non-classical as inferior or lacking taste or, worst of all, commercial. And yet the sounds and ideas we too often dismiss represent the very music that makes our contemporary world so vibrant and alive.

Cutietta has created a Contemporary Division within the Thornton School that brings together jazz, music industry, technology, popular music, studio guitar, and film scoring into one single learning environment that currently enrolls 435 fulltime students and a huge applicant pool. And all this in a city that is unquestionably the entertainment capital of the world. It's exciting stuff. 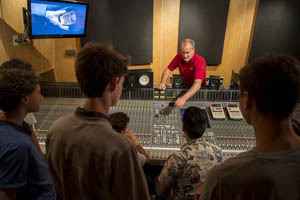 Among the Contemporary Division's offerings, the Film Scoring program is rated as one of the best in the world, and Music Production (in Chris Shinn photo right) provides training for an elite group of students who are expected to meet the very specialized requirements of the industry. The Music Industry Program is seen as providing the diverse skill set that students need in order to establish themselves professionally: Entrepreneurship, macro-economics, arts management, accounting, law, licensing, publishing and technology. Then there is the newest innovation of all, the Popular Music Program--one of Cutietta's most innovative ideas, which has quickly established a vital place for itself in the music world.

What I particularly admire about the Popular Music program is how familiar and old fashioned the objectives are, as it stresses all musical skills from collaboration, to recording, performance and songwriting to music production and entrepreneurship. In many ways it inculcates an updated version of the professional toolkit that Beethoven and Mozart would have recognized as totally essential, but which seems to have eroded in importance in our quest for ever-increasing specialization. 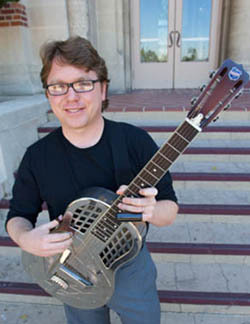 The story of the program's development over the last six to seven years provides fascinating insights into the management of change and the promotion of innovation. The approach was not to follow the usual policy of institutional accretion. Rather, the School made room for this program by clearing the curriculum path and cutting other less successful programs. Having identified the new program as a priority, Cutietta recruited a leader to "help evolve the School," choosing Chris Sampson (in photo right), a USC alum and a classically trained guitarist. Sampson returned to USC in 2003 and began shaping an initiative called "Protegé," that combined existing mentoring and career coaching with a new network of skills. By 2003/4 Sampson had established some prototypes that led to a fully developed initiative for a scalable Popular Music Program. For example, song writing classes, formerly "a sleepy elective" with no music major involvement, were enhanced. Their popularity exploded, with staggering increases in enrollment from 13 students to over 175 over four to five years.

Sampson is sanguine about his success and puts it down to better-structured and more enjoyable classes; technological developments happening globally at that time; the opportunities that students themselves rapidly identified with improved content; and the general sense that this was a perfect storm of opportunity. The huge success of these developments provided the foundation for the Popular Music program, created in 2009. 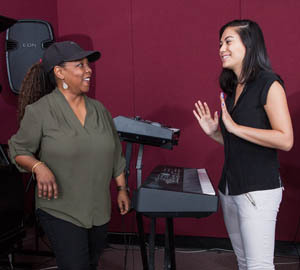 The Program's current Chair is Patrice Rushen (in Noe Montes photo on the left), an outstanding example of a contemporary musician who is best known as a music director and keyboardist. From the Junior Performance Producers and Songwriters class I attended, which simply buzzed with the type of energy and optimism only undergrads can bring to a project, the work being produced is really excellent and speaks well for the future of the form. Industry leaders also attended this class working with the students in the most collaborative and supportive way as the students performed and recorded their own work.

In Pt. II, I will describe the Popular Music program in greater detail and discuss how it might offer some guidance for the shaping of classical music training for the 21st Century.