The excitement caused by Anne Akiko Meyer's acquisition of a $3.6 million Strad, including a sighting on Keith Olbermann's show, indicates not only volatility in the musical instrument market but in the classical music industry. 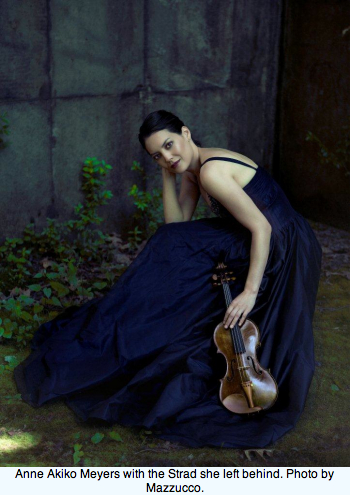 By coincidence, I just filed my review of Anne's new CD to Gramophone Magazine after having previewed her Pasadena debut with it on Saturday night for HuffPost Arts! The continuing stories for Keith and other classical music jocks are manifest:

• How did the new fiddle project into the hall.
• Which concertos does she look forward to playing with the new "Molitor" Strad (not named after the baseball player which is probably what caught Keith's eye in the first place)?
• Is Ambassador Auditorium better than Mouse Hall?
• What's it like to be a classical music celebrity?

The celebrity thing is already going full bore. iTunes just uploaded the recordings Anne made for Sony, including:

It couldn't happen to a nicer classical music team, including Rebecca Davis who finds time between tending twins to run one of the classiest publicity operations in the business.