In the NFL draft, top draft picks are never a lock, and sometimes the best players in any given year aren't even drafted. Just ask Arian Foster, Wes Welker or Tony Romo about that. The 2013 class is one of the deepest in a long time, with great value coming in the lower rounds.

Here are 15 potential steals as we head into the three-day draft extravaganza that begins Thursday night:

Excellent route runner who was overshadowed by teammate Marquise Lee, but has great hands and great football acumen. He bears some strong similarities to Reggie Wayne coming out of Miami and should be a really effective No. 2 receiver.

With a super-productive career at UCLA, Jones is a thick-bodied, high-motor guy who should be able to play right away. His 6.5 sacks last season were nice, but his 19 tackles for loss were sensational.

The Heisman Trophy finalist has battled marijuana and alcohol issues and did not play a single snap last season after being kicked off the team. Mathieu isn't especially refined as a cover corner, and at under 5-feet-9, he was the second-shortest CB at the combine. But he has great athletic ability and can make huge plays in the return game, as well -- he has "boom or bust" written all over him.

Fantastic cover corner who is tough and can support the run, despite being under 200 pounds. Hayden should contribute in the nickel right away.

Overshadowed by Jarvis Jones and Alec Ogletree, Washington has nevertheless shot up draft boards after a solid combine that saw him run the 40 in 4.55. In terms of late Day Two, he could be a major steal.

Collins had a sensational combine, where he was the top performer in five events. An impressive pass rusher and overall disruptor, he could very well rise to a second-round pick. 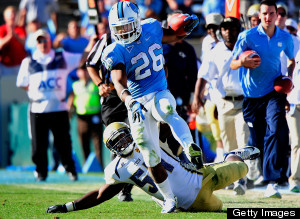 Former North Carolina running back Giovani Bernard is a complete back who could wind up as one of the real gems of this draft class. (Getty Images)

A complete back who may very well turn out to be Doug Martin 2.0, Bernard has tremendous vision and toughness.

A nice 6-foot-2, 215-pound target who caught 72 catches at a lower level, but still has terrific natural ability with a near 40-inch vertical. Johnson, shockingly, was not invited to the combine, but is absolutely a name worth watching for on Friday or Saturday.

A big, reliable target and fluid athlete who amassed 900 yards and six touchdowns for the Rose Bowl champs. Will be awesome in the red zone as well.

Classic SEC safety who loves to support the run (he had a team-leading 76 tackles), Reid is also an elite athlete (40-inch vertical) with great closing speed.

The 2012 Doak Walker winner "quietly" ran for 1,830 yards and 22 touchdowns last season. Ball is going to be a really good player in the NFL for a really long time.

Moore is rising up draft boards after a stellar combine performance that saw him run a 4.65 40 and record a 38-inch vertical leap. For his career, he totaled 43 tackles for a loss and an incredible 16.0 sacks.

Williams is a first-round talent who led the nation in receiving yards and touchdowns last season.

Like Ball, Franklin has flown a bit under the radar, yet ran a 4.46 40 at his pro day and could very well be the first running back off the board. The former Bruin set new school single-season records for rushing yards (1,734) and all-purpose yards. Remember, UCLA also recently produced Maurice Jones-Drew.

This very typical Wisconsin-style interior linemen is both highly intelligent and very physical. Frederick has a strong chance of being the first center taken in the draft.

CORRECTION: A previous version of this article incorrectly stated that Sio Moore had 43 tackles for a loss and an incredible 16.0 sacks. Those are his career statistics.