The National Football League wants M.I.A. to pay up in a big way. The 38-year-old rapper famously took the stage at the Super Bowl XLVI halftime show in 2012, making waves when she held out her middle finger to the crowd.

In new documents obtained by The Hollywood Reporter, the NFL is requesting $16.6 million from M.I.A. -- a massive total reached by claiming breach of contract, the tarnishing of the organization's reputation and restitution for the benefits M.I.A. allegedly received from the exposure.

M.I.A. herself is hardly keeping quiet about the lawsuit. She took to Twitter on Monday posting a photo of a document outlining percentages of her earnings that the NFL claims it is owed. "THIS IS WHAT THEY WANT ME TO SIGN," M.I.A. wrote. "THAT IVE BEEN FIGHTING FOR 2 YEARS ON TOP OF 16 MILLION."

THIS IS WHAT THEY WANT ME TO SIGN , THAT IVE BEEN FIGHTING FOR 2 YEARS ON TOP OF 16 MILLION pic.twitter.com/PMurD3oVFL 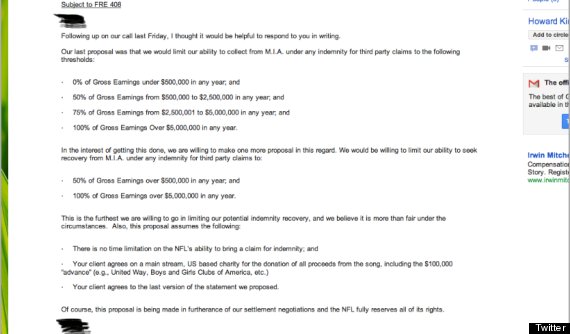