The NFL crossed its midpoint with its fair share of drama. A quarterback who is not named Brady, Brees, Manning or Rodgers went full Madden to throw seven touchdowns, while elsewhere one of the league's best teams nearly lost to one of the league's worst. And the only team that remains undefeated won only two games last season (which probably has Mercury Morris and the rest of the '72 Miami Dolphins breathing a tad easier).

Here are five of the top story-lines from this week's slate:

No quarterback has more game-winning drives in his first two seasons during the Super Bowl era than Indianapolis' Andrew Luck. That number is now 10, to be exact. After a brutal first half Sunday night in which he completed just three passes, Luck brought the Colts back to a 27-24 win in Houston by tossing three touchdown passes. And this without the league's leading third-down target, receiver Reggie Wayne, who will miss the rest of the year. Luck recently told HuffPost that he is simply here to win football games. Mission accomplished.

2) Close But No Cigar

The Seahawks have not lost at home since December 2011. Their quarterback Russell Wilson has never lost a home game as a pro, and the last time he did lose a home game, he was a junior in college. And then on the other hand, Tampa Bay's rookie quarterback Mike Glennon was making just his fifth career start. So against all expectations, Tampa Bay went into the league's most hostile environment and actually had Seattle on the ropes, 21-0 in the first half. But Seattle managed to find an answer to the Buc's more than 200 rushing yards and eked out a 27-24 overtime win. The Seahawks go to 8-1 as the Bucs remain winless. And with New Orleans losing to the Jets, Seattle retains its grip on the top seed in the NFC.

Philadelphia was just looking to stay in the NFC East hunt when it traveled to Oakland, but instead got one of the greatest performances in NFL history. Quarterback Nick Foles tied a league record for touchdown passes in a single game, throwing seven against a decent Raiders defense. Foles was statistically perfect, throwing all over the field with ease and accuracy. His seven touchdowns were more than his six incompletions! The question now becomes, will Michael Vick ever start for the Eagles again?

Orchard Park has always been a tough place to play, and the Bills defense was very good: Chiefs quarterback Alex Smith and his offense were outgained 470-210. But as it's done all season, Kansas City relied on the league's top-ranked defense to make plays, which it did, scoring the team's only two touchdowns and feasting off of undrafted rookie quarterback Jeff Tuel. The Chiefs will be undefeated for their Week 11 tilt with Denver (they have a bye next week). 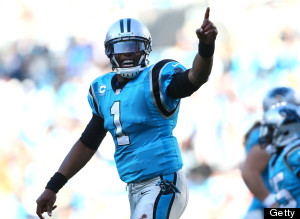 Cam Newton has the 5-3 Carolina Panthers rolling, having won four straight. The average score in Carolina's five victories this season is 34 to 10. The Panthers have yet to beat a single team at .500 or better, but Newton has played lights out, as has this defense, which ranks 10th in pass yards against and 2nd in rush yards against. Newton, to go along with his four rushing scores, is completing 64 percent of his passes with a nearly 2-1 TD-to-interception ratio. The Panthers now face an intimidating two-game stretch against San Francisco and New England (on Monday night).