Just before the New Year, the London-based Center for Economics and Business Research announced that Brazil had overtaken the UK as the world's sixth largest economy. Furthermore, it predicted that by 2020, India and Russia will also have overtaken all the European economic powers. The BRIC countries -- Brazil, Russia, India and China -- are profoundly shaking up the G8.

All of these newcomers give aid to developing countries. And yet some still receive substantial international aid themselves from the U.S. and other multilateral and bilateral donors. This apparent schizophrenia is the symbol of the new world order into which we are entering, a world of multi-polar powers, where half of the G8 will still have significant poverty within their borders. The current recession and growth of emerging economies is irrevocably changing the world.

So where will international aid organizations -- NGOs -- fit into this changing world?

Let's examine first the issue of funding. NGOs receive funding from a variety of donors; the public, governments, multilateral institutions, foundations and corporations. Of late, the focus has increasingly been on corporations as a source for development funds. USAID, for example, is increasingly emphasizing private sector engagement in the programs they fund; and the State Department has led a series of initiatives such as Partners for a New Beginning, which are entirely focused on private sector investment in developing countries, involving multinationals such as Coca Cola and Middle Eastern enterprises such as Souktel. Accenture recently released a report about "Convergence" which details the emerging relationship between NGOs and corporations. No longer is it enough, Accenture argues, for the traditional model of a corporation's corporate social responsibility (CSR) arm to fund programs here and there. Corporations are looking to partner with NGOs who understand their business in a partnership that meets both community and commercial needs. CSR is becoming an integral part of corporate strategy.

CHF International's own experience suggests that this may well be the case. Our work with the private sector locally has long been a form of convergence. In Haiti we worked with Caterpillar's local affiliate, HAYTRAC, to create a training center for Caterpillar heavy equipment operators. 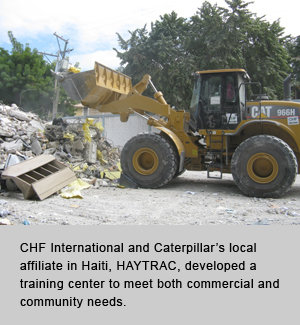 HAYTRAC were able to use local labor, a far more cost-effective option than importing expensive operators from as far away as Chile, and in turn, since the project launched in October 2009, we have been able to create skilled, long-term employment for over 160 Haitian vehicle operators. The tragic coincidence of the earthquake quickly made these graduates into experienced operators and critical members of the local workforce in their own right.

Multinational corporations are beginning to see this model as the way forward because these once emerging markets are now their growth markets. Haitians, Brazilians, Indians -- these are consumers and stakeholders, not just beneficiaries of charity relegated to the back of annual reports -- and their countries are becoming core new markets that large corporations cannot ignore. Corporations have to be more and more focused on instituting higher labor standards; local employees working in what were once sweatshops are now becoming consumers of the products their factories make.

From the point of view of our work and missions, these changes mean opportunities and challenges for NGOs. We should celebrate the emerging economies which are growing and beginning to outpace our own. This is, in many ways, what we have been working towards -- a more equitable world. We should also be seeking the opportunity to work with corporations to ensure that their work does have a positive impact on local communities and that they are making social as well as financial investments. At the same time, we have to be careful that in this new world we, and other organizations like ours, do not suffer mission-creep. Our missions of social progress, improving livelihoods and creating greater equity must remain our focus and we must not allow ourselves ever to become agents of exploitation. Each situation must be judged on its merits, according to the mission and values of the NGO and the work of the corporation. Commercial needs can only be met if they genuinely service the community and lead towards greater equity and economic empowerment. Where corporations truly recognize this, we see effective convergence.

The future for NGOs is working side by side with the private sector. And as the line between developing and developed becomes more blurred, the future will include working in G8 countries. Even if the geography of poverty is changing, our missions are not. NGOs, whether in the richest countries of the world or the poorest, have the role of working with the unheard voices, with those communities that are left behind. We have to be the enablers of progress, global citizens who operate with creativity, care and authenticity in the poorest of communities. And as the gap between the USA and China, for example, lessens, we may find new approaches to some of our own domestic issues. Post-financial crisis, does microfinance have a role in low-income communities in the USA? Can models of community engagement forged in post-conflict Middle East work with gangs in our own urban environments? These are the new questions we must ask, as we experience a convergence of developing and developed economies and of the NGO and corporate sectors.