JUIGALPA, Nicaragua -- Under the blue and white flag of Nicaragua and homemade banners accusing the president of selling out the country, some 10,000 campesinos marched against the Sandinista government’s efforts to expropriate land to make way for a $50 billion private Chinese canal project.

Saturday’s march against the canal was the 47th massive protest against the canal since the ruling Sandinista Front rammed the sweetheart concession law through congress, giving unknown Chinese businessman Wang Jing 50-year ownership rights to what’s being called the largest infrastructure project ever attempted. 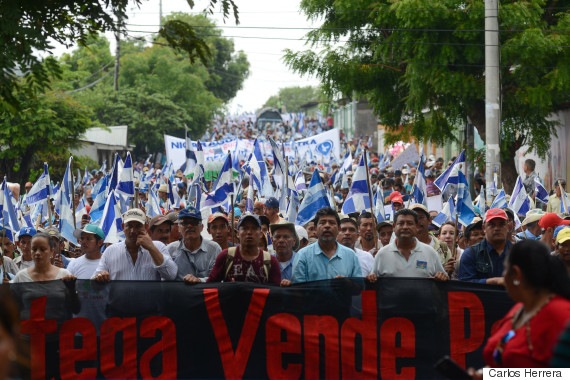 “First of all we need to defend the sovereignty of Nicaragua, secondly the campesinos’ land and thirdly Lake Nicaragua because it belongs to all of us,” said Raúl Oporta, a farmer from the interior agricultural community of Nueva Guinea, one of the municipalities laying in the path of the canal.

“Enough already with the abuses of this government; they want to do the same thing they did here in the 1980s: confiscate land from the campesinos,” said fellow protester Leonard Barrera. “Nicaragua has to demonstrate its bravery. As Sandino said, Nicaragua is for Nicaraguans,” he added, referring to Nicaraguan national hero and ruling party namesake Gen. Augusto Sandino, who fought against the U.S. Marines’ occupation in the 1930s. 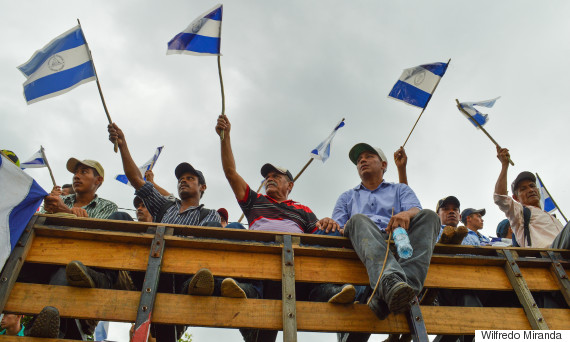 The campesinos who participated in Saturday’s march arrived in cattle trucks from different municipalities along the proposed canal route. Transportation was complicated by the government’s refusal to allow buses to bring protesters to the march, according to Nemesio Mejía, coordinator of the National Council for Defense of the Land, Lake and Sovereignty of Nicaragua.

Many of the campesinos who demonstrated against the canal yesterday had to leave their rural communities more than 12 hours in advance to arrive in time for the march. Residents from Río Punta Gorda, a rural community in the path of the canal, traveled for five hours up river to Puerto Principe, where they boarded cattle trucks for another five hour trek along bumpy roads to Juigalpa. 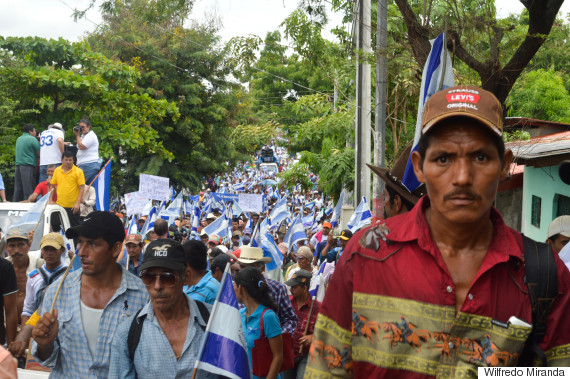 Protesters also said that their cellphone service had been “blocked” prior to the march. Campesinos said they hadn’t been able to use their phones since Friday, while some people reportedly received mysterious text messages telling them to stay at home because the march had been canceled.

For the most part, the march was conducted peacefully. The only incident occurred when the campesinos past Sandinista party headquarters in Juigalpa. The two groups clashed after an exchange of insults, resulting in one Sandinista getting injured. 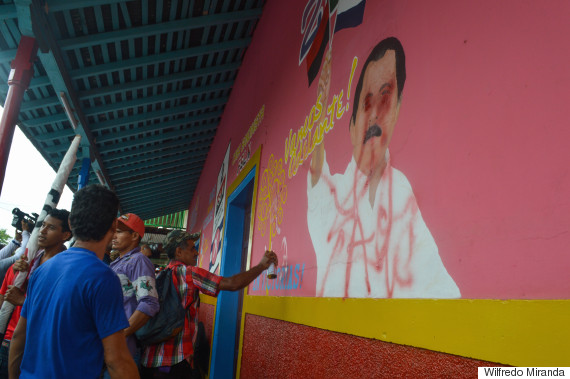 Congressman Victor Hugo Tinoco, of the dissident Sandinista Renovation Movement, warned that the government of President Daniel Ortega is playing with fire in the countryside, an area that is traditionally anti-Sandinista.

“He can be sure of an uprising over the land expropriations for the canal, because this is the largest campesino movement in the history of Nicaragua,” Tinoco told Fusion. “We are returning to the decade of the 1980s, the vicious circle of dictators, authoritarianism, secret pacts and then rebellion.” 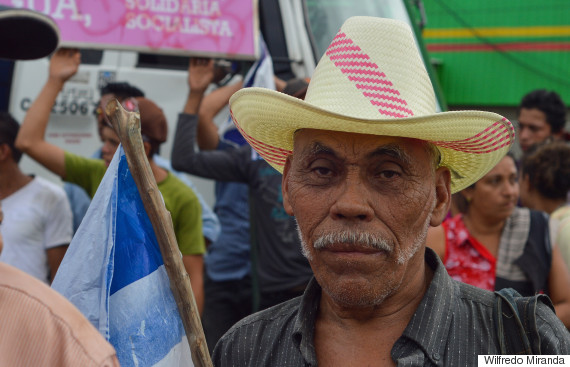 Luis Blandón Pineda, a cassava farmer from Nueva Guinea, said he doesn’t believe the government’s promises that the canal will bring progress.

“Here no one is in favor of the canal, because it serves no purpose for us. It will only benefit the investors, but it has nothing to do with us,” Blandón said. 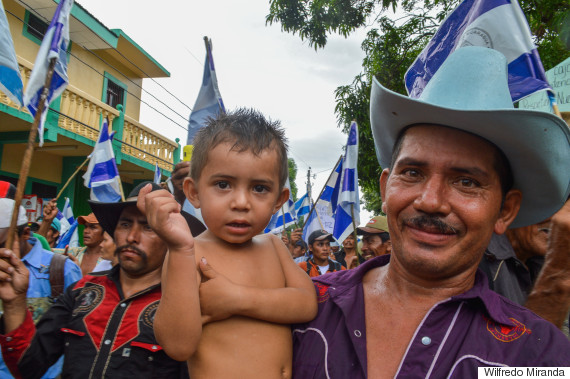 The campesinos are very attached to their land, and won’t give up their properties without a fight, says anti-canal activist Arnulfo Sequiera. “The land is the only thing we have. And I am not ready to give up everything I have, because my life is here on my land. With the canal we would become beggars on the streets.”

Luis Beltrán, a campesino from the community El Tule, said his land “is my life, because I work my land and if I don’t work my land I’ll die of hunger. This is our life. Our mother earth, and she provides us with food.” 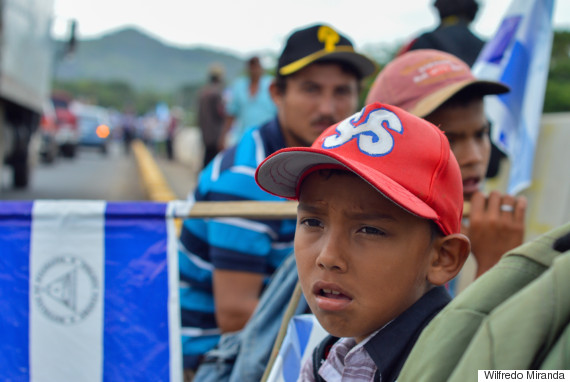 Those sentiments were echoed by Angela Ramírez. “It’s sad because after 30 years of living on this land they want me to leave and go start over somewhere else from zero, and that’s difficult,” she said. “Where we live we survive with the other communities, by selling our products with our little businesses. If that ends, we won’t be able to survive. We’ll be the living dead.”

In addition to the banners denouncing the canal and accusing the president of selling out the country, campesinos burned the red and black Sandinista flags and spray painted graffiti on the walls of the Sandinistas’ party headquarters in Juigalpa. Municipal authorities hurried out to whitewash the graffiti hours after the march ended.

As the protesters marched in Juigalpa, Chinese canal firm HK Nicaragua Canal Development Investment Co Ltd held a press conference in Managua to “clarify some misunderstandings” about the mega-project, according to chief engineer Bill Wild.

The Australian said the canal project will protect the forest and won’t contaminate Lake Nicaragua. 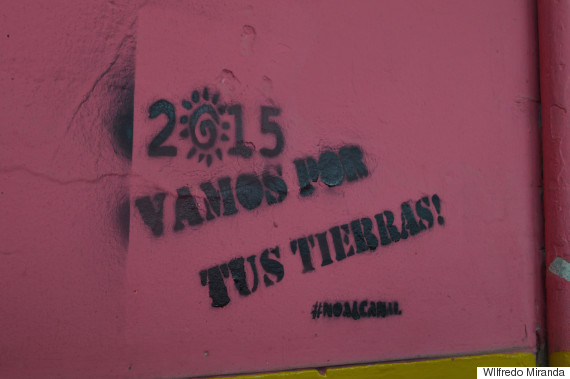 Wild said only 300 indigenous families will need to be relocated to make way for the canal. He said those families will be able to decide whether they want to get compensated for their land at market price, or relocated to a community built by HKND.

The Sandinista government and HKND claim that only 7,000 families will be affected by the canal, although independent estimates by Centro Humboldt put the number at 100,000.

Nicaragua Celebrates Our Lady Of Carmen