This article also appears on the Cato At Liberty website

U.S. policy is equally generous to unaccompanied children (UAC) from El Salvador, Guatemala, Honduras, and Nicaragua -- but today's child migrants are not coming from Nicaragua.

Explaining why Nicaraguan UAC are not part of the recent surge may help explain why so many are coming from El Salvador, Guatemala, and Honduras -- the so-called Northern Triangle.

Nicaragua has low rates of violent crime, gang membership, and fewer family connections to the United States than the Northern Triangle.

If U.S. policy was the main reason why there is a sudden surge of UAC, it should also pull UAC from Nicaragua. This suggests that other factors like the high levels of violence and strong family connections are the main reasons why UAC from the Northern Triangle are coming and why Nicaraguan UAC are absent.

Nicaragua has a much lower homicide rate than El Salvador, Honduras, and Guatemala. According to the United Nations, there has been a dramatic increase in murder rates across Central America since 2006 -- except in Nicaragua. 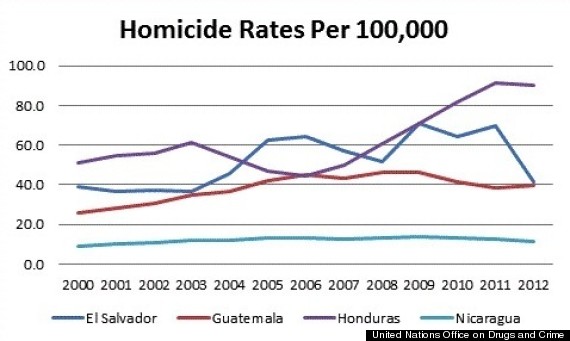 Nicaraguan gang membership is low compared to other nations in Latin America. The numbers are so low they don't merit close recording and only one major Central American gang even has a substantial presence there: Los Perrones. 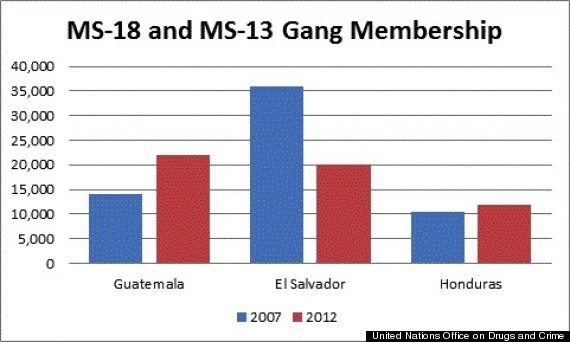 Only about one percent of Nicaraguans in 2010 said that crime was the most important issue facing their country. By contrast, 44 percent of El Salvadorans, 35 percent of Guatemalans, and 25 percent of Hondurans said crime was the most important issue facing their respective countries. Lower homicide rates and gang membership have made Nicaraguans feel much safer than citizens of the Northern Triangle. This also explains the recent large percentage increase in asylum seekers from Northern Triangle countries in other Central American nations, although the numbers remain small.

Nicaragua is also a destination for migrants from El Salvador, Guatemala and Honduras. In 2012, there were 14,597 Hondurans, 3,291 El Salvadorans, and 1,387 Guatemalans living in Nicaragua.

Of all immigrants in the United States, both legal and illegal, there are about 1.3 million from El Salvador, 900,000 from Guatemala, and 500,000 from Honduras. By contrast, there are only about 260,000 immigrants from Nicaragua. The few family connections between Nicaraguans and Americans have helped to keep the UAC numbers small.

Nicaragua is part of the Central America-4 Border Control Agreement that allows nationals from El Salvador, Honduras, Guatemala and Nicaragua to move freely across those four nations. Border controls between those nations do not constrain Nicaraguan migration to the United States. Liberalized Mexican immigration laws have also lowered the costs of all migration from Central America.

Those seeking to blame U.S. immigration policy for the surge of UAC can claim, at best, that U.S. policy is partially to blame for such a surge, but they cannot justifiably claim that it is the sole or most important explanation. As the absence of Nicaraguan UAC indicates, violence and family reunification seem to be much bigger factors in explaining the surge in UAC than any recent change in U.S. policy.