MANAGUA, Nicaragua — When Francisca Ramirez saw a group of Chinese businessmen walking by her home in Nueva Guinea, a small village in southern Nicaragua, accompanied by local police officers and carrying equipment, she immediately knew something was wrong.

A few months earlier, at the end of 2014, Nicaraguan President Daniel Ortega had announced a huge new project that he claimed would lift the country out of poverty. The Grand Interoceanic Canal of Nicaragua is one of the most ambitious engineering projects in history, one that would rival the Panama Canal a few hundred miles to the south. This canal would span approximately 170 miles, connect the Atlantic and Pacific Oceans and divide Nicaragua in two.

Ramirez and her neighbors first found out about the project when they saw the president talking about it on TV. She says no one asked them what they thought about it, which is surprising considering it would effectively leave her and many others homeless.

“What are you doing here?” Ramirez remembered asking the men.

“This land is no longer yours,” she recalled them responding.

And just like that, a new, bleak chapter began for Ramirez and her community.

Ortega promises that the canal project will create thousands of jobs and attract foreign investment — a Hong Kong-based development company is set to foot a large portion of the $50 billion price tag. With nearly 30 percent of people living on less than two dollars a day, Nicaragua, the poorest country in Central America, needs the boost.

But a look at the fine print suggests these shiny promises can quickly turn into something sinister. The construction of the canal was approved through Law 840 and passed by Nicaragua’s congress in June 2013. In addition to the canal, the law allows for a dozen sub-projects including an airport, two ports, a pipeline, a railroad track and two free trade zones.

But as a recent Amnesty International report pointed out, Nicaragua’s congress passed the new law without consulting local communities, effectively opening a door for future projects without the need to ask those living in the area for their opinion. In practice, then, the law means nearly 120,000 people are currently at risk of losing their land, homes and livelihoods. The environmental cost of the project would also be devastating, causing irreversible damage to miles of fertile land and to Lake Nicaragua, the largest source of freshwater in Central America.

“Taking our land away is like taking our lives away”

Ramirez never thought she would ever be a human rights activist. Born to a family of campesinos, or smallholder farmers, she has dedicated her life to working her land and selling produce in local markets. But she now lives with the frightening prospect of losing the home she built for her four children and the land that provides their subsistence.

“I have worked the land since I was 12 years old,” she said. “I do not know how to do anything else.”

Her community, La Fonseca, sits in the middle of one of the most fertile areas of Nicaragua. Around 2,000 people live there, nearly half of whom are children. They produce beans, malanga (a type of sweet potato), corn, wheat and cheese. “Since we found out about the construction of the canal,” she said, “life has become unbearable. Our lives depend on the land. Taking our land away is like taking our lives away.”

So she decided to fight back.

A project that violates people’s rights and does not take into account what people think cannot be a development project. Francisca Ramirez

“We started to organize ourselves,” she said. “We started to take to the streets to protest because they do not respect our rights, they do not consult us. The only thing they tell us is that we are going to be evicted.”

The authorities did not react well to her campaign. They see Ramirez and her community as a threat. Protestors and human rights defenders who dared to take part in any of the dozens of anti-canal and anti-government demonstrations over the past couple years have been brutally repressed. Ramirez herself has suffered a number of attacks. She was arrested in 2015, and again a year later. She has been threatened and harassed more times than she can remember.

“A project that violates people’s rights and that does not take into account what people think cannot be a development project. What kind of future can we have if they do not take our lives into account? The government is toying with our lives,” she said.

“Since 2013, when the law came out, we have been persecuted, attacked, our rights have been violated,” Ramirez said. “It is a very sad story. We have been demanding justice for four years and for four years no one has listened to us. The government has not offered us an alternative. We have done everything possible to try to get them to listen but they don’t. This government is blind, deaf and dumb to everything, they do not see our reality.”

Nevertheless, Ramirez refuses to give up. “I keep going because giving up the fight would mean starting to die,” she said. 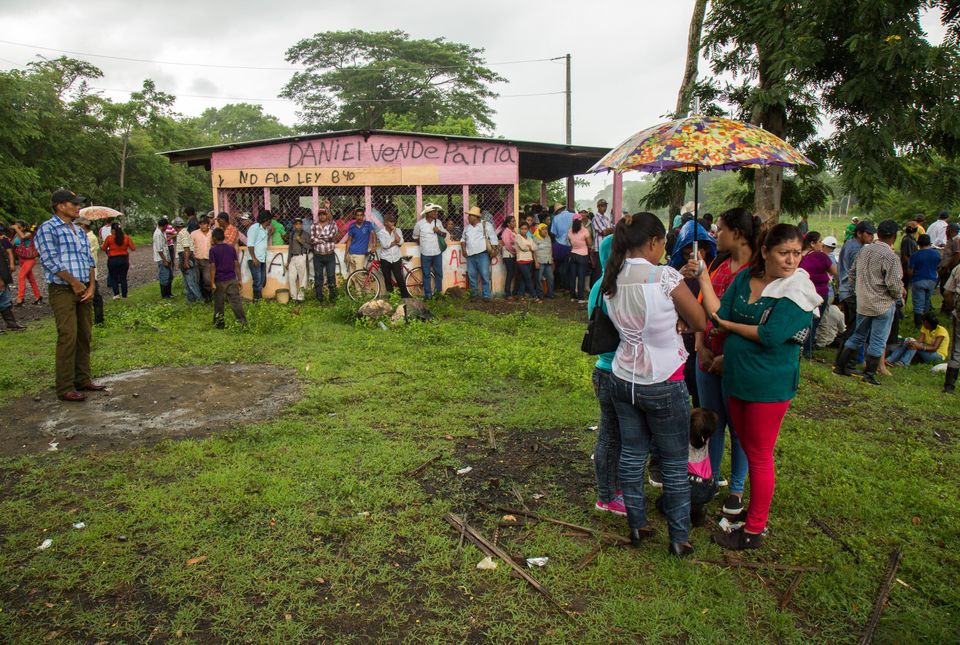