Catholics tired of fish on Friday can enjoy a Lent-friendly smorgasbord in Nicaragua, where soups made with iguana or armadillo are served with a healthy portion of bull testicles.

The delicacies violate local laws against eating such species during their breeding period, but are seen as a meat-free dish in the lead-up to Easter. They are also considered an aphrodisiac, and thus popular with older men.

"It is really tasty. It is a traditional dish," gushed Manuel Zamora as he bought two iguanas at a market. The popular Iguana soup is made with the critter's meat and eggs, ground and toasted corn meal, and vegetables.

Pedro Espinoza, a Nicaraguan who lives in Costa Rica but is home visiting, says, "I like the taste of iguana. The little eggs are delicious."

Especially popular is a performance-enhancing soup called Levanta Muerto, which translates roughly as "Raises the Dead." It is said to boost energy and virility, and nourish the brain.

The soup consists of meat from the black, spiny-tailed iguana, brains, bone marrow, bull testicles and, in some cases, shellfish.

"I love bull testicles," said Jose Cordoba, a fan of the dish, which is popular among older men and office workers.

Miriam Sirias, who runs a lunch counter in a Managua market, says people eat the soup to keep their gray matter sharp. Her chef Cristina Gutierrez cuts in to add: "A lot of people eat it for its aphrodisiac effect."

Armadillo meat is also popular, even though some experts say it can carry the bacteria that causes leprosy.

But it is the spiny-tailed iguana, known in Spanish as a garrobo, that is the biggest hit in popular Nicaraguan cooking. People here say it helps fight cancer, diabetes, anemia and other ailments.

Jennifer Gomez, accompanying her mother to the market, says garrobo flesh kills cancer cells, claiming she has a neighbor who has had cancer for nine years but keeps it in check by eating garrobo three times a week.

"She has not died," Gomez said.

Demand for the garrobo in particular is so fierce that live animals are brought to markets in large numbers, even though you are not supposed to hunt them during their breeding season from September to April.

"Here, we sell them skinned," said one vendor, Iveth, as she chops the head off a garrobo, removes the skin, rips out the guts and hands over the body and eggs to a customer, all for the equivalent of less than four dollars.

Another soup popular along Nicaragua's very poor Atlantic coast is made of turtle flesh, fish, beef coconut milk and vegetables.

Enrique Rimbaud, head of an environmental group called Amarte, said it is a pity to sacrifice all these animals.

He is collecting signatures to press Nicaragua's parliament to pass a law protecting 187 endangered species by classifying them as part of the national heritage. 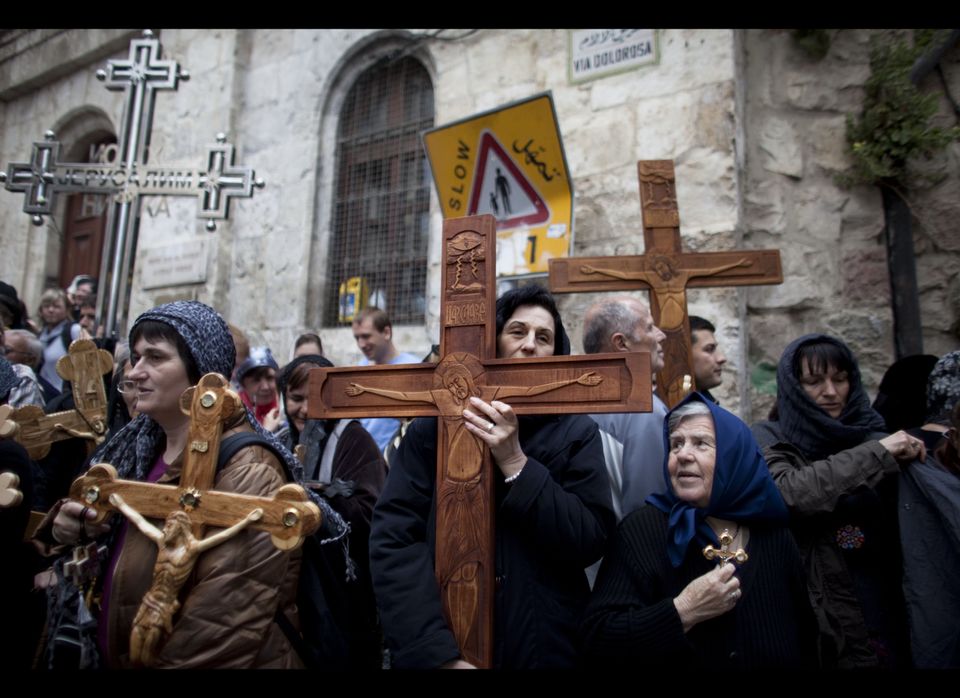 1 / 18
Christians Celebrate Good Friday In Jerusalem
JERUSALEM, ISRAEL - APRIL 22: (ISRAEL OUT) Chrisitan pilgrims carry wooden crosses along the Via Dolorosa during the Good Friday procession on April 22, 2011 in Jerusalem, Israel. Thousands of Christians around the world will today mark Good Friday when they commemorate the crucifixion of Jesus Christ. In Jerusalem Christian pilgrims took part in processions along the route that Jesus is believed to have taken in his last days as he carried the cross. (Photo by Uriel Sinai/Getty Images)
Getty