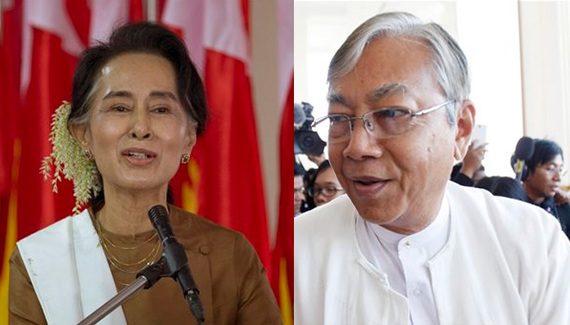 Emails have been flowing in fast from friends in Myanmar. "The first civilian president in my lifetime!!" said one. "Htin Kyaw is a good man," said another. "He will do his best."

I heartily agreed. I met Htin Kyaw several times during trips to Myanmar (also called Burma). The tall, humble man elected by Parliament this week as the first non-military president in 62 years was a good choice for many reasons.

Primarily, Htin Kyaw (pronounced tin chaw) was endorsed by Aung San Suu Kyi to run in her stead. Suu Kyi is barred from the presidency by a clause in the military-drafted Constitution that forbids people with foreign relatives from holding the office. Her two sons are British, as was her late husband.

The generals still clinging to power refused to change the clause during weeks of negotiations. They made impossible demands - such as giving them more influential cabinet positions. Suu Kyi wisely said no.

Instead, as head of the party that swept general elections in November, the Nobel Peace Prize winner turned to Htin Kyaw to be her trusted proxy.

His response after being elected was typically modest. "This is the good will and loving kindness of the people. This is a victory of the people," he said, adding, "This is sister Daw Aung San Suu Kyi's victory."

I first met Htin Kyaw during the heady months after Aung San Suu Kyi was released from house arrest in 2010. She was holding back-to-back meetings all day at her house on University Avenue. I was waiting my turn on the lawn. Htin Kyaw was trying to keep the process on track and pleasant. We stood for some time in the shade of a tree and talked.

He told me he had volunteered to help because Suu Kyi was a childhood friend. They both attended the Methodist English High School in Rangoon, a missionary school considered the best in the country for many years.

He went on to get degrees in economics with emphasis on statistics and computer science at Rangoon University. And like Suu Kyi, he studied in England. His English is flawless.

Htin Kyaw is no stranger to government. He was an official at the Trade Ministry and the Foreign Ministry before being forced out in 1992 when military rulers expelled democracy advocates. Though not well known outside the country, he has been a democracy stalwart. When Suu Kyi was accosted by military forces as she tried to travel by train, Htin Kyaw, who had driven her to the station, waited for her despite the danger. He was arrested and held in prison for four months. When Suu Kyi was occasionally allowed to speak from the gate of her house, Htin Kyaw, with his distinctive silver hair, could be seen close by. He now is a senior executive at a charity founded by Suu Kyi.

His wife, Su Su Lwin, also is a trusted ally. Her father was one of the founders of the NLD. She ran for Parliament when the "Burma Spring" began in 2010. I met her during another visit, when Aung San Suu Kyi was called away and our meeting was cancelled. In a typical gentlemanly gesture, Htin Kyaw came to my hotel to apologize in person and brought his wife to reinforce the message of sincere regrets. I could not help wondering, how many White House officials would do the same?

To be sure, Htin Kyaw and Suu Kyi have daunting difficulties ahead. Much of the country still lacks electricity. Schools are woefully inadequate. Corruption is rampant. And there's a 60-year-old civil war to resolve.

The military leaders have signaled they have no intention of playing nice and helping. They named a former general with ties to former dictator Than Shwe as their candidate for President. Myint Swe was in charge of security forces when monks were beaten down in the 2007 Saffron Revolution. He currently is on the U.S. Treasury sanctions list for his role in the brutal former regime. Because he finished second in the balloting - thanks to support from the army bloc in Parliament - Myint Swe will become First Vice President. He is sure to be a thorn in the side of the democracy forces.

So there won't be much of a honeymoon for the new president. But it is worth noting that Htin Kyaw is also a poet and writer. He has witnessed much and still values truth and kindness. He has put his country and his friend Suu Kyi ahead of his own interests for many years. His peers consider him a man of impeccable character. Not bad credentials for a leader.

Rena Pederson is author of "The Burma Spring: Aung San Suu Kyi and the New Struggle for the Soul of a Nation."