Chelsea Handler and Nick Cannon are feuding over Twitter, and it's gotten ugly.

It all started when Chelsea found out Nick was going on tour.

"I just heard nick cannon is starting a comedy tour. Who's going to do the comedy?" she tweeted on Thursday.

"Wow @chelseahandler I actaully used to have respect for you as a comic. But for one artist to diss another in the same art form. #Tasteless," Nick responded. "Soon as I get off stage tonight, I'm going in on @chelseahandler I'm about to be relentless! OFF WITH HER HEAD but right now I got to focus."

"@nickcannon pls drink this before you tweet me again," Chelsea responded with a photo of a grape soda.

After his show, Nick returned to Twitter with a stream of colorful insults about Chelsea's appearance and career: 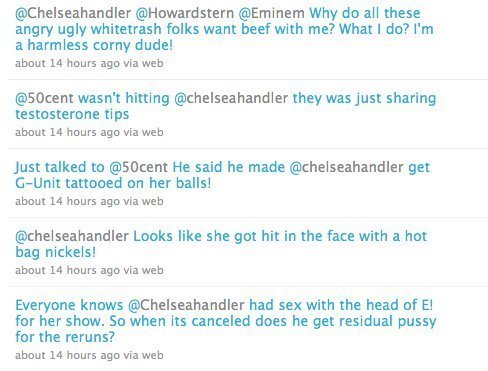 He capped off his rant with a disclaimer and a plug for his show: "Just jokes people, LOL! Well I got to be at my next job in a few hours so I will continue the jokes on my morning show. Tune in @923nowfm," he tweeted.