What a gift we have been given! I have been a huge American Idol fan for the past 14 years. This season has been filled with excitement and inspiration! Our community was able to experience the fever full-force with a hometown guy making it to the exclusive final four.

At the beginning of the season, there were whispers that a boy from our sleepy New England town was trying out.

The first time I saw Nick Fradiani perform, I knew he was my favorite idol, not just because he is from my hometown but because he is an amazing talent.

Nick Fradiani is now in the top four and his ride has been an awesome one, especially for Guilford, Connecticut.

After the first couple of shows, it was apparent that Nick had what it takes to be the final one standing. Fast forward to May 1, 2015 where Nick has made it to the top four and it has been declared Nick Fradiani Day in Guilford, Connecticut.

As the mother of two children, ages 8 and 10, I've watched their eyes grow bigger and bigger as Nick moved closer and closer to the finish each week. We have been there from the first scoop of Fradiani Frenzy ice cream created at a local orchard. My daughter's been so excited she's chronicled every mention of Fradiani on her Instagram account! We have reveled in each week, looking forward to each show. We've excitedly spent our time attending viewing parties at the local high school, taking pictures of banners at our local grocery store, and, of course, voting like crazy.

The experience has been fun and unifying. We've watched our community come together and stand behind one of our own.

All of this leading up to a mind-blowing hometown visit yesterday with over 10,000 in attendance. It was the climactic culmination of an American Idol journey and start to an incredible career beyond American Idol for Nick Fradiani, and, in some small way, for all of us who followed each step of the way.

This grass-roots return to Guilford involved an entire community standing up to cheer Nick on. Schools let out early and everyone came together. There was Fradiani Ice Cream, "Vote Nick" donuts, text messages from local businesses with NICK as a coupon code. Banners covered the town, kids painted "Nick" on their faces, and thousands filled our town green.

A pep rally at Guilford High School sent chills all over my body! The energy was profound as screaming high schoolers cheered on their former classmate. When Nick and his family entered the gym,the energy reached an insane, mind-blowing level.

Later in the day, thousands filled the streets as Nick and his family were the focus of a hometown parade.

All this lead up to a climatic heart-stopping performance by Nick and his band Beach Avenue. Tears came to my eyes as Nick and his dad performed together on stage on the town green. Their relationship covered a lot along the way. How proud this close-knit family must be came across to us in the crowd.

Enjoy the slide show. As you can see, my kids and their friends reveled in it all. We are still soaking up all the happy, positive energy that surrounded this whole experience. Thank you, Nick, for letting our kids (and adults!) experience all of the magic, up close and personal, and reminding us that dreams do come true, even in your own backyard!

You can keep up with Sandy by becoming a fan of Peaceful Daily or signing up for her daily living tips!

CORRECTION: An earlier version of this post erroneously referred to Nick Fradiani's band as Ocean Avenue. Its correct name is Beach Avenue. This post has been updated accordingly. 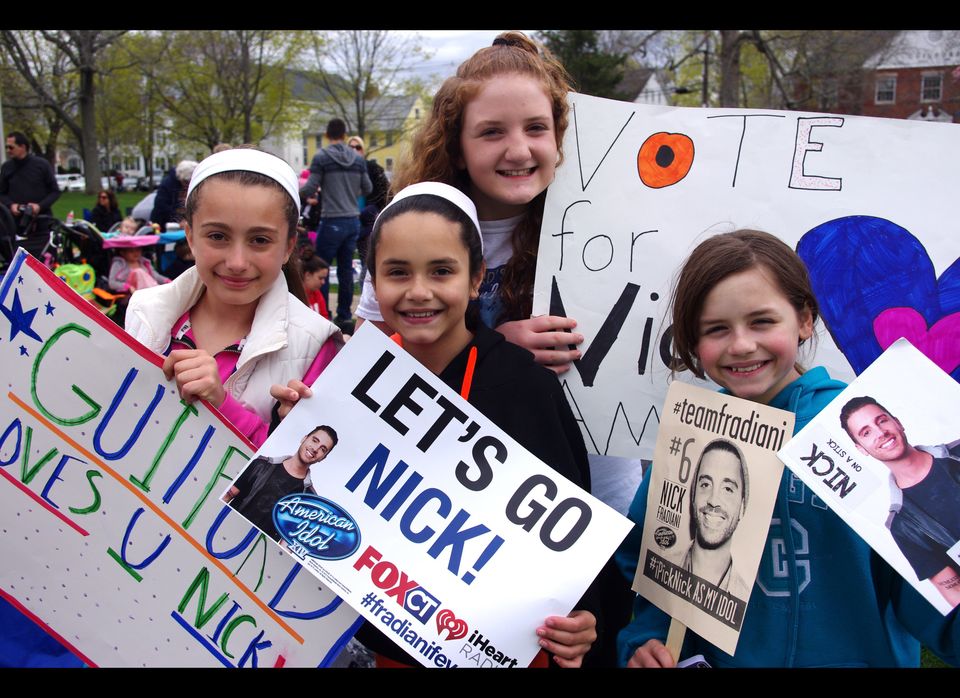