Nick Frost has done a lot of press for "The World's End," his third feature film with friends Simon Pegg and director Edgar Wright.

So, too, is "The World's End." Wright's film -- the final entry in his Three Flavours Cornetto trilogy, following "Shaun of the Dead" and "Hot Fuzz" -- focuses on a group of high school friends (Pegg, Frost, Paddy Considine, Eddie Marsan and Martin Freeman) who reluctantly reunite for a pub crawl in their hometown ... and eventually find themselves in a struggle with alien robots hellbent on changing the very fabric of Earth.

HuffPost Entertainment spoke with Frost, 41, about the new film, why he's never concerned with fan reactions, and how he, Pegg and Wright have remained so utterly normal since becoming famous. (Hint: by not fronting with each other.)

Simon and Edgar wrote this film, but how much input do you have on the script? I'm always the first person to get the script. Then I'll sit and go through each line. If I don't think it's funny, I'll make an alternative suggestion. I'll suggest different story arcs. I'll know the whole thing, as a producer not as an actor. I'll give it back to them and we'll spend three or four days going through every note. I think you can't be precious about having your feelings hurt. I found that out when Simon and I wrote "Paul." It's about the good of the film and not about your own personal feelings. You can't be moody that they took out a joke, it's just how it is. But yeah, I'm very lucky. Also, we've been working together for so long that the script I get is kind of finished. Which is great. It's like having a hand-tailored suit. Then you get it and you say, "Can the pocket here be a bit lower?" "Yeah, of course!"

"The World's End" script includes an elaborate, closed-quarters fight scene. What was it like to do that in the the film? It was important to Edgar and all of us that we did it. We loved doing all that shit. Any day I got to flop into bed with a giant fucking bruise on my ribs [was good]. I bruised my liver in that scene.

Yikes, how could you tell? It was swollen. I could feel it! I couldn't lie down. I had this weird taste in my mouth. They were like, "You want a pad?" I said, "Fuck that!" It was only later that I found out the actor who kicks me, Samuel Mak, was 19 and a kung fu champion. After four or five takes, when you can taste iron in your mouth, you're not going to say, "Actually, I'd love that pad." I think I'd rather have died on set than back down.

I liked how "The World's End" reverses the personality traits of the characters that you and Simon played in the previous films, where now you're the button-up one. We make these things so infrequently that it would be terrible if people were bored with us or bored with it. I think you run that risk if you're perceived as a double act -- which we're not -- because then you just play yourselves. It's boring. Also, we're actors, so the chance to be anything different is a treat and a challenge and a pleasure. That's the best thing about this job. I can be Ed in "Shaun of the Dead" and I can be Andy Knightley in "The World's End." People believe both. That's a good thing.

You three have built up a lot of goodwill from fans over the last decade. Did you worry that if this film took a slight step back from "Shaun of the Dead" or "Hot Fuzz" the fans would pounce? Look, obviously we care what people think and we want to make films that people like. That said, we only ever make films for the three of us. For Nira Park, our producer. For my wife. That's who we make the films for. We've never deviated from that. If, along the way, there are a million people worldwide who are like us, they're going to feel like it speaks to them personally. That's what we've always done. You have a problem once you get to a point where you think, "Yeah, we're fucking brilliant! People fucking love us! They'll like what we fucking tell them to like!" Once you start doing that, and start diluting the thing that people like, then you're in trouble. "We made 'Shaun of the Dead,' so they'll eat up this shit!"

How have you managed to keep that mindset? I feel the simple answer to that is that we've all been mates for 20 years. I've known my wife for 12 years. Simon's known his wife for 12 years. Nira, our producer, has done everything we've done. She's married to a normal guy. All my wife's friends are normal people. My wife's mom would fuck me up [if I was a jerk]. She would cut me down. The answer is that no one would stand for it. The three of us, too, we're all very honest with one another. That's why it's worked. I think we've all said it to one another at certain times: "You're being a dick."

You're a huge film fan. What have you liked this summer? I fucking haven't seen much at all.

That's heartbreaking. It is heartbreaking. The good thing about these trips is that you get a chance to see a lot of stuff on the plane and in the hotels. I love "Iron Man 3." I really liked "Oblivion." I watched "Bernie" on the plane. It's fucking great; Jack Black is amazing. There was a bone of contention between Simon and I, because I hadn't seen "Star Trek Into Darkness." This went on for ages, and he was getting upset. Then, the other day, I had two-and-a-half hours off in Chicago and I watched it. I loved it. I made a thing at our next Q&A of stopping it. I stood in front of Simon as if I was going to ask him to marry me, and then said, "I need to right a wrong" and I apologized [for not seeing it sooner].

That film is good, but a lot of "Star Trek" fans were unhappy. Yeah, but I always think about things terms of population of a town. How many people went to "Star Trek Into Darkness"? Millions of people. If you had a town with 5 million people in it, someone would be pissed about the transport system. It's just how it is. People are not going to like everything. That goes back to what we were saying earlier. If you try to hand it to those people, you're going to upset another group of people. 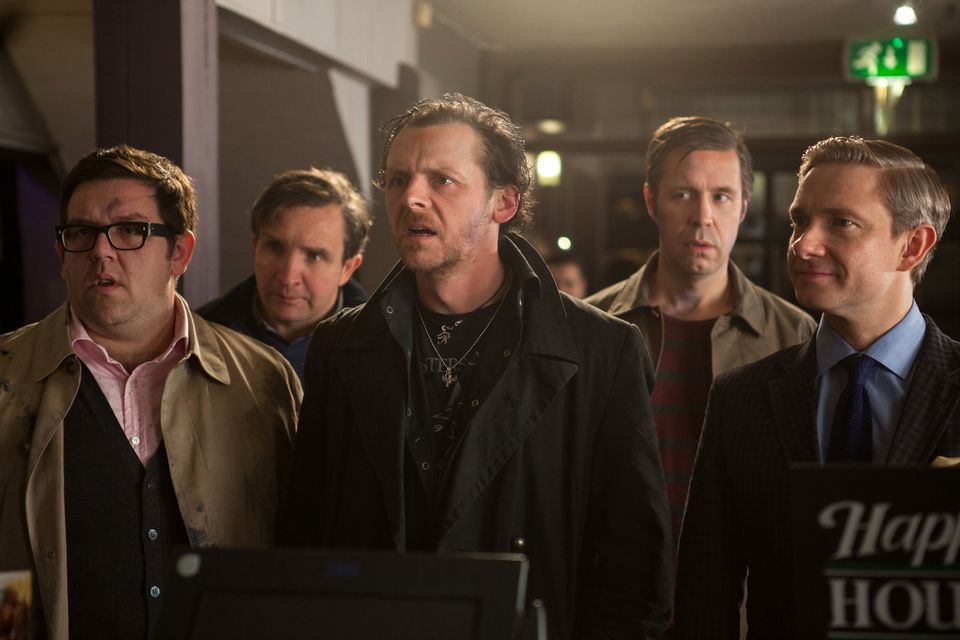