Nick Hornby is intelligent. When interviewing the young British artist one gets the sense that his words are not only considered, but important, picking up on everything, and resulting in our interview resembling more of a linguistic dance than a simple exchange. He is unmistakably informed about the world and his craft, having attended both Slade and Chelsea College of Art. His knowledge of theory and art history are specifically what currently define his work -- stark white futuristic sculptures that, upon closer inspection, are actually hybrids of various existing artistic references. Crane.tv visited Nick's monastic studio to find out more about this most modern artwork.

Upon first inspection of Nick Hornby's sculptures they appear to be entirely abstract. But take a turn around the figure and, as if by magic, images or as Nick puts it, "quotations", will reveal themselves. In the pure blankness of his unusual white material -- something that gives the impression of marble but is in fact as light as a feather -- one can find Rodin, Brancusi, Frink or any other image he has decided to capture. The result is uncanny -- an object that conveys nothing and everything simultaneously. 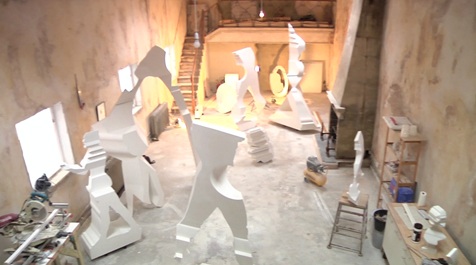 The creative process is in itself complex and specifically tailored to add to the final effect. Hornby traces and scans the works that he has chosen to reference in the piece. These are then translated into 3D. He explains, "there's no deterioration from the objective quotation that happens when I take the initial image ... Once the algorithm is made it is a 3D file which is then cut out by a rather amazing company that carves the hulls of super yachts". 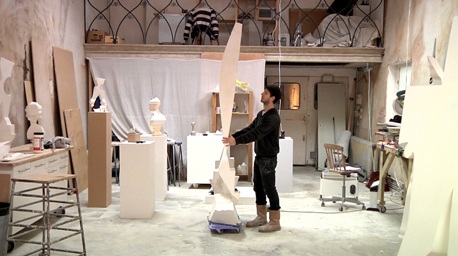 The point of all this, he tells us, is to "remove the personal subjective" as much as possible. The further removed the sculpture is from the artist himself, the purer the experience of the viewer. This idea is not new. It is echoed in art and literary criticism, depending on which theoretical school of thought you belong to. In his 1967 essay, The Death of the Author, Roland Barthes said that, "to give a text an author is to impose a limit on that text". By applying such stringent methods of separation in the creation of his work, Hornby is attempting to remove its limitations. 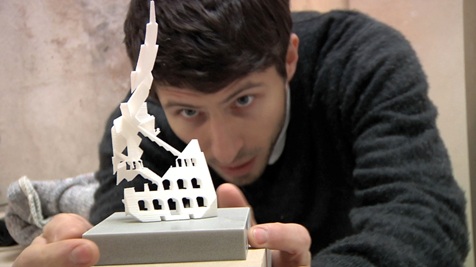 In many ways he is giving more to his audience. His pieces, though they may seem at first to be cold and alien, are actually highly linked to humanity. Though he would never want to identify a specific artistic intention he did comment briefly on the purpose of the work saying that viewers may see a link between themselves and the sculpture. When they question the ideas and references behind the sculpture, then perhaps see that it is "an ad mixture of multiple ideas", they then might think to themselves that maybe they themselves "are an ad mixture of multiple ideas."

The application of superior technology and use of material in an artistic field; the display of years of art history on a seemingly blank figure; the artist's destruction of self and emphasis on wonder and curiosity within the viewer; the fact that this is just one phase of work in a career! These prolific factors make it clear that the artist Nick Hornby is much more than just intelligent, he is a true innovator and an exciting talent to watch grow.