*Scroll down for pictures

(PHUONG LE, AP/THE HUFFINGTON POST) SEATTLE -- Nick Risinger has always gazed up at the sky. But last year the amateur astronomer and photographer quit his day job as a Seattle marketing director and lugged six synchronized cameras about 60,000 miles to capture an image of the entire night sky.

Risinger, 28, set up his rack of cameras in high-elevation locales in the Western U.S. and South Africa, timing photo shoots around new moons when nights were long and dark. He programmed his six cameras to track the stars as they moved across the sky and simultaneously snapped thousands of photos.

He then stitched 37,440 exposures together into a spectacular, panoramic survey sky that he posted online two weeks ago. The photo reveals a 360-degree view of the Milky Way, planets and stars in their true natural colors. Viewers can zoom in on portions of the 5,000-megapixel image to find Orion or the Large Magellanic Cloud.

"I wanted to share what I thought was possible," said Risinger, a first-time astrophotographer. "We don't see it like this. This is much brighter. On a good night in Seattle, you'll see 20 or 30 stars. This, in its full size, you'll see 20 to 30 million. Everything is amplified."

Other sky surveys have preceded this one, including the Digitized Sky Survey, a source for Google Sky. Many serve scientific purposes and were shot in red and blue to measure the temperature of stars, Risinger said. He shot in a third color, green, to give the photo added depth and richness, he said.

"What a labor of love it is!" said Andrew Fraknoi, senior educator at the Astronomical Society of the Pacific. "Professional astronomers are now doing much deeper surveys of small regions of the sky, using big telescopes. But every once in a while it's nice to step back and have such a beautiful photographic record of the whole sky."

"This is not a scientifically useful image. This is for educational and artistic appreciation," Risinger said, adding that he wasn't motivated by money but hopes to sell prints and other products to keep the website running.

To capture the entire night sky in a year, Risinger plotted out an exact schedule of images he needed from both the northern and southern hemisphere. He divided the sky into 624 uniform sections and entered those coordinates into the computer.

"The sheer amount of work was mind-boggling," he said at his apartment in Seattle. "It's not a wing-it kind of project. You have to plan how you're going to get the entire sky. And you do that by dividing it up into pieces and knowing what time you need to collect those pieces because as the Earth goes around the Sun, things come in and out of view."

In March of last year, Risinger and his older brother, Erik, traveled to the desert near Tonapah, Nev., and took the first photos of what eventually would become his Photopic Sky Survey.

When he realized the work was too monumental, Risinger quit his day job as a marketing director of a countertop company to devote himself full-time to the project. He also persuaded his retired father, Tom, who lives in Gig Harbor, Wash., to join him.

In the U.S., he and his dad would often drive all day and set up and take photographs all night. They chased ideal windows of opportunity to catch the night sky at its clearest.

Their travels took them to dark places where light pollution was low and higher altitudes where there was less water vapor – near the Chiricahua Mountains in Arizona, near Fort Davis, Tex., and Lassen National Forest in California. He found himself staking out stars in freezing temperatures in Telluride, Colo., and amid stars in South Africa where none of the constellations were recognizable to his northern hemisphere-trained eyes.

Each night, Risinger set the six cameras – high-end monochrome astrophotography imagers equipped with different filters – to point in the exact same spot and continuously feed his laptop with images. He monitored the photographs in real-time and passed the dark hours eating sunflower seeds. Meanwhile, his dad slept.

Back in Seattle, Risinger began piecing the panoramic image together in January. He used a computer software program to scan each frame, recognize the pattern with a database of stars and then match them with the other colors and frames. That got projected onto a sphere.

"Making an atlas of the night sky is something that mostly professional astronomers would have done in the past," said Fraknoi, who is also chairman of the astronomy department at Foothill College in Los Altos Hills, Calif. "With new computer tools at our disposal, it's remarkable what amateur astronomers can discover."

Risinger finished the project a couple weeks ago, and has been getting thousands of hits on his website.

"It was always hard to describe what I was doing that would make sense to people that aren't familiar with astronomy. But once they see it, they get it."

View Risinger's incredible panorama (below), and visit SkySurvey.org for a firsthand account of the project. 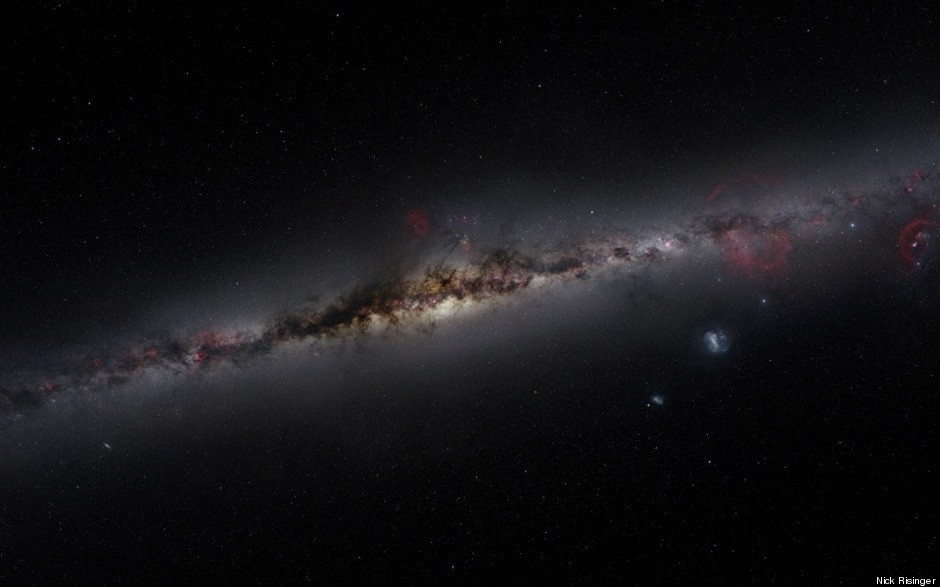