Taymour Grahne, the accomplished blogger and art collector credited with shining a spotlight on some of the Middle East's best artists, is finally opening his own gallery.

The eponymous Tribeca establishment opens its doors this week, bringing the best of Middle Eastern and North African fine art to the doorsteps of Manhattan. To celebrate, Grahne is ushering in the gallery's debut with a exhibition of one of Iran's biggest -- and most opinionated -- painters, Nicky Nodjoumi. 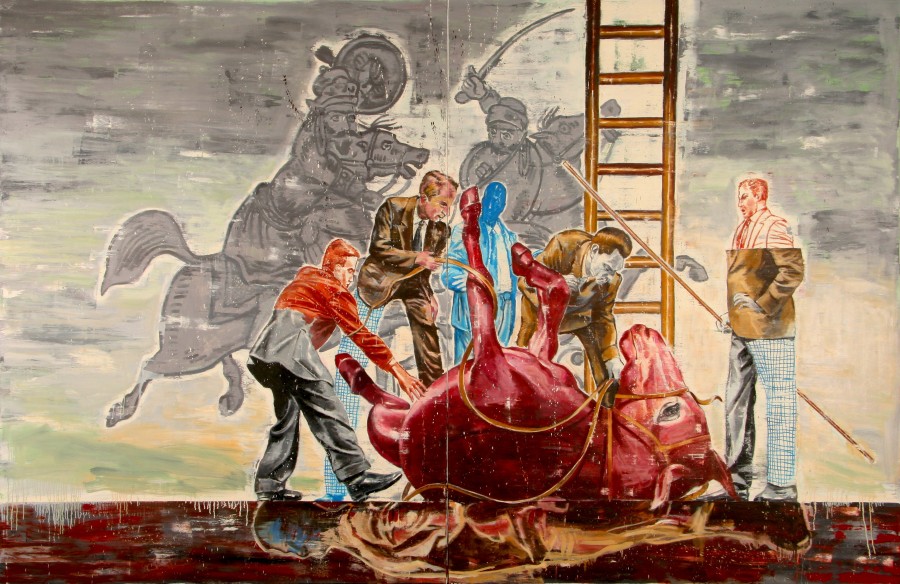 The 71-year-old artist from Kermanshah is known for his politically savvy artworks; a blend of painting and collage that point a finger at the existing political power structures in the U.S. and Iran. Though he matured in the shadow of revolutionary activity in his native country, he descended upon the United States in a time of protest and upheaval as well, both standing as historical moments that continue to influence his sharp, satirical pieces.

Ahead of his show, "Chasing the Butterfly and Other Paintings," we spoke to the artist about secret police, the Vietnam War and art's role in politics. 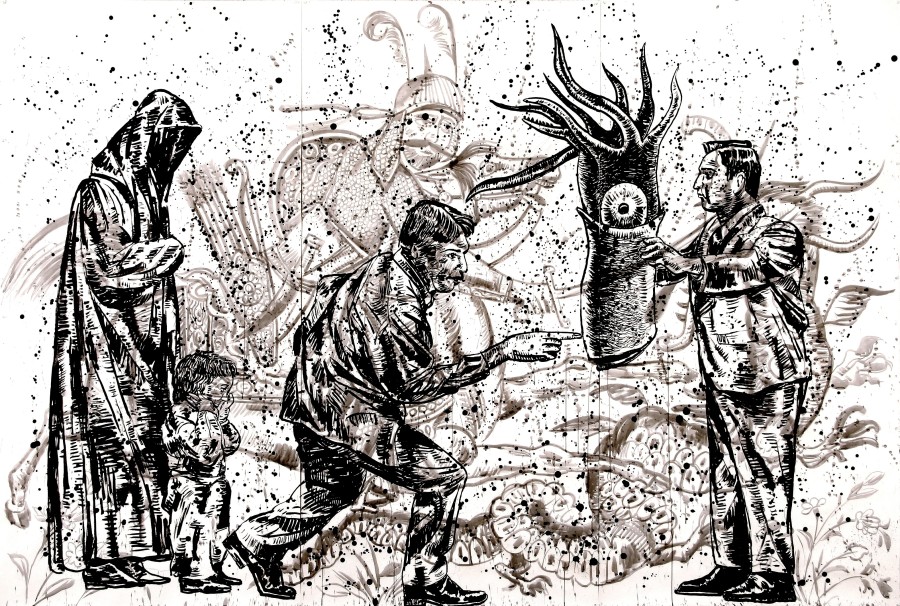 You were born in Iran in 1942. Can you tell me a bit about your childhood there?

I was born in Kermanshah, which is about 30 Kilometers from the Iraq border, in the west of Iran. There is a small oil refinery a couple of kilometers to the east of the city. When you are passing through the area, there is strong smell of raw oil that thickens the air for miles. Two things stand out in my early childhood: I was about about four or five when I was put on indefinite bed rest by our family doctor when I was diagnosed with a congenital heart defect. The other incident was when I was in preschool, and we were drawing in class. I did a drawing of a rooster which was so good that teacher took notice of it.

What type of arts education did you receive in Iran?

In elementary school my calligraphy was very developed. I practiced Persian calligraphy almost every night before I did my homework. It was not until high school that I started doing oil paintings along with my cousin. My father noticed that I was interested in painting and one day he brought home a young man and said this is your painting teacher. My real art education, however, started when I was accepted to the School of Fine Art at Tehran University in 1961. It was an academic training and the most avant-garde style we were allowed to do impressionistic paintings. Later on Michelangelo, Caravaggio, Van Gogh and Picasso influenced me deeply. 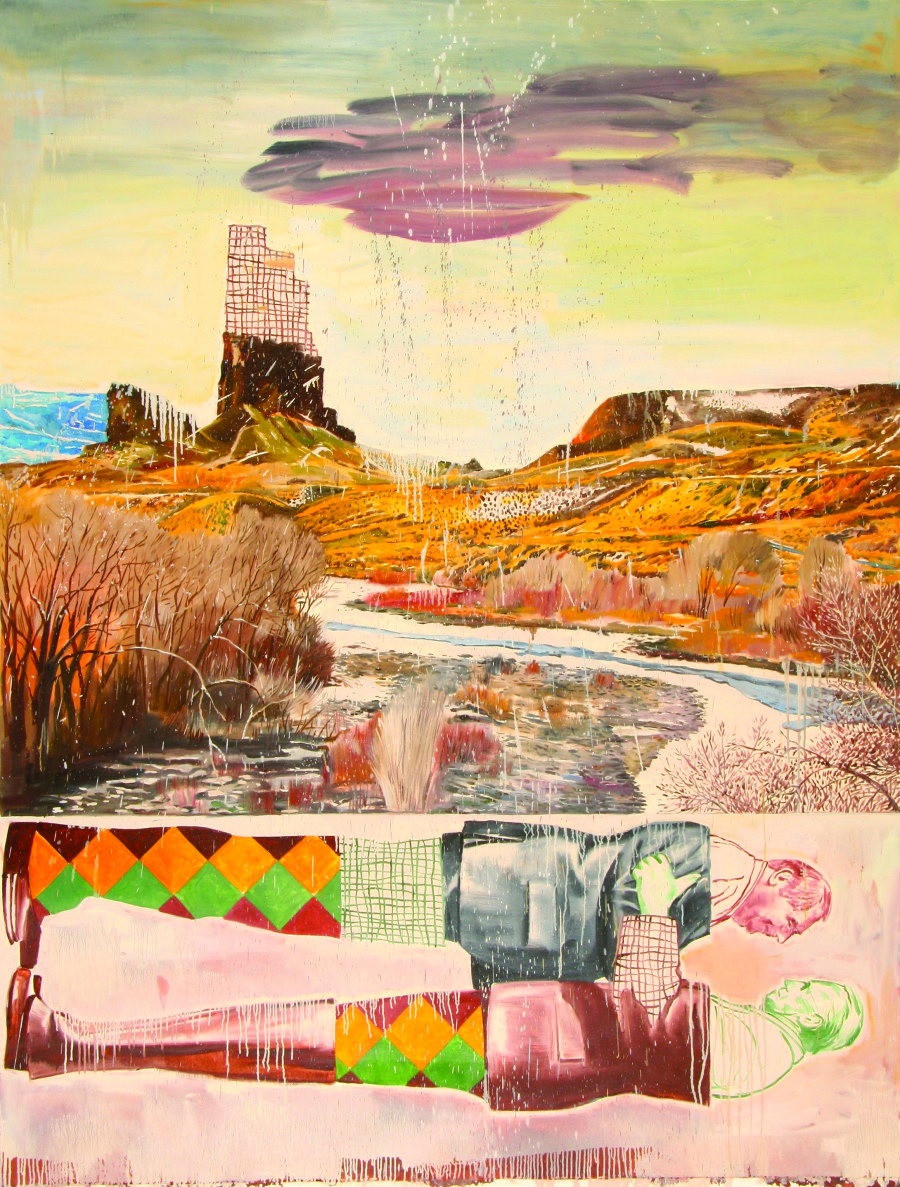 Nicky Nodjoumi, The One Who Sees What is Hidden, 2011, Oil on Canvas, 85 x 65 inches / Courtesy of Taymour Grahne Gallery, New York

You left the country to study in NYC. What was your experience like living in the U.S. at this time?

In 1968 I received a two-year scholarship to study at the Beaux Art in Paris. However, in May of that year the student revolt happened there, and subsequently all the scholarships were withdrawn, including mine. So, in 1969 I decided to come to NYC. The first thing I did was to enroll at the New School to learn English. I got involved in the Confederation of Iranian Student Association, which was against the repressive government of Iran and worked for political freedom of expression and the freedom of political prisoners.

At the same time the Vietnam War was going on -- and demonstrations and protests against the war were everywhere in NYC. I was participating in both demonstrations against the repressive government of Iran and against the war in Vietnam in USA. For three years I did not paint. At that time, I thought painting was obsolete. But I did organize a workshop to create posters for the political liberation and resistance against political repression at home in Iran and around the world. Finally in 1972 I enrolled in the City college of NYC to get my MFA. It was only after getting my MFA that I used art as a means of expressing myself, exclusively.

You returned to Iran shortly before the Iranian Revolution. What was the experience like for you as an artist? Did you partake in physical demonstrations and protests or did you express your sentiments more exclusively through art?

After I got my MFA, I decided to return to Iran. My goal was to teach in the School of Fine Arts at the Tehran University. But SAVAK (the secret police of Iran) had a different idea. After three months of interrogations, I was told that I was not allowed to teach at any of Iran's educational institutions or cultural centers. I could, however, have a show once a year. So for the next few years after that, once a year, I had a show in Iran. Until 1978 I spent most of the year in New York making paintings, and then took them to Iran. I was there during the revolution, participating in demonstrations and helping to organize workshops to make political posters for different causes. Meanwhile, my paintings began to reflect my state of mind and the socio-political environment of Iran against the backdrop of the 1979 Iranian revolution.

In 1980 after the reopening of the Museum of Modern Art in Tehran, the new director of the museum asked me to have a retrospective of my work. They were interested in my work, especially, because of the political nature of the paintings I had done before the revolution. This retrospective was comprised of the work I brought with me from USA and the paintings I had done during the revolution in Iran. A few days after the museum show had opened, an article appeared in the Islamic Republic newspaper denouncing the show as anti-revolution, anti-leadership of Islam and pro-Western imperialism. Two week later, I had to leave all my paintings behind at the the museum when I had to leave Iran for NYC. Since then NYC has been my home. 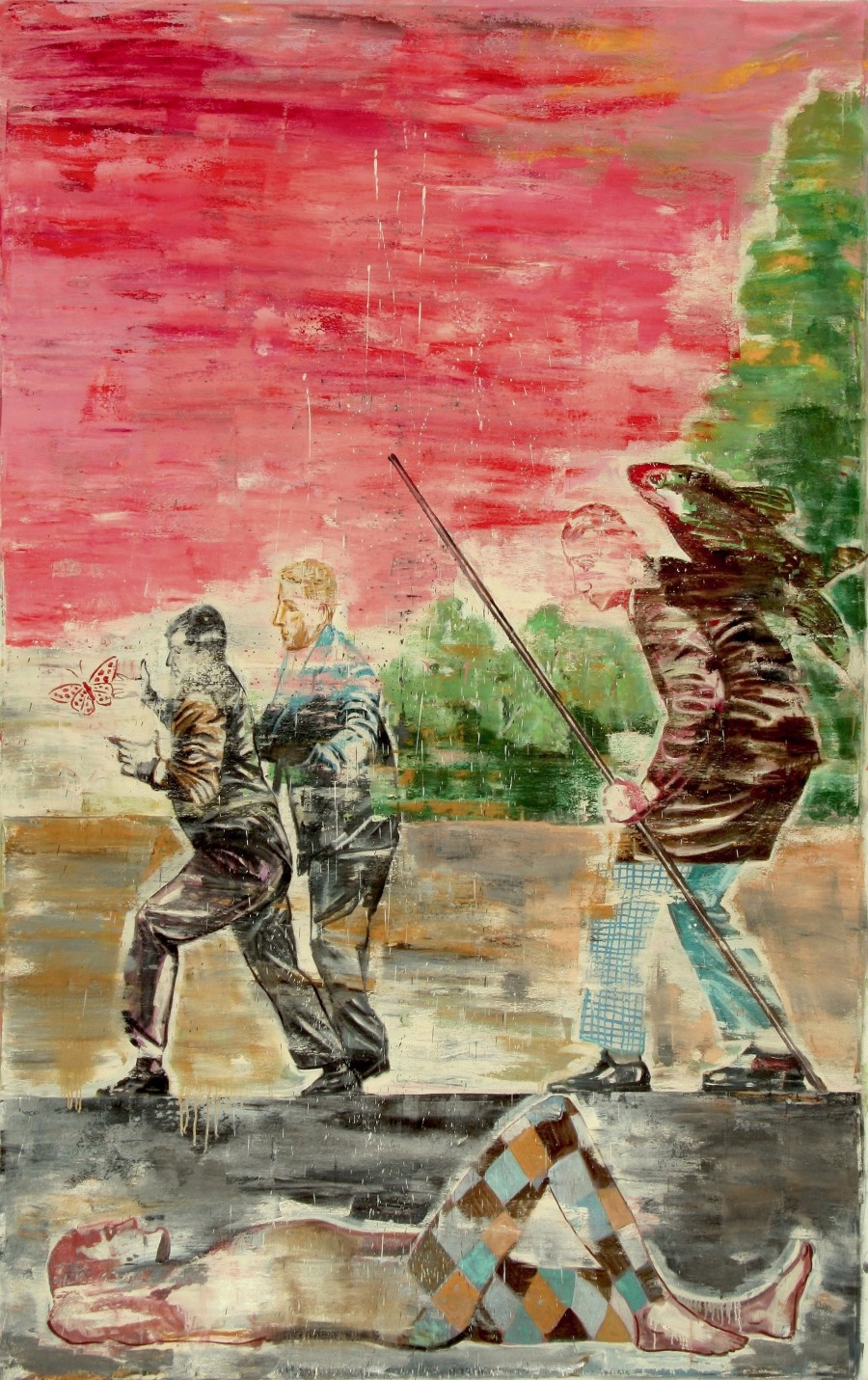 Do you or did you ever feel like a dislocated artist?

Well, this is a difficult question to answer, I cannot say with certainty yes or no! At the beginning, no. Later on, yes.

The exhibition catalogue for your upcoming show describes your paintings as "theatrical stages." Do you often have a narrative in mind when you create? Are you drawn to particular figures or situations in Iran?

The characters in my painting are assembled from the clips of newspapers and photographs in general. They are essentially people of power regardless of being Iranian and American. Usually the narrative appears through the small studies that I make before starting a painting. The narrative is usually a critique of power through dark humor. I would like to arrange the characters in my images in such a way so that it looks as if they are acting on a stage. In general, because the subject of the paintings is a critique of social power, I am drawn to contemporary figures like politicians and businessmen in America and clerics in Iran.

What roles do humor and satire play in your work?

Humor and satire play a fundamental role in my paintings. In order to be more effective in portraying violence, brutality and displacements, I use humor as an instrument of my visual and conceptual vocabulary.

How do you view the role of the artist in light of the more recent revolutionary activity across the Middle East?

The recent revolutionary movements across the Middle East region require -- more than ever -- that art and artists take a position of responsibility on the political stage. It helps to educate people and be part of the resistant movement. Artists can help to advance the people's revolutionary aspirations for political freedom and equal justice. 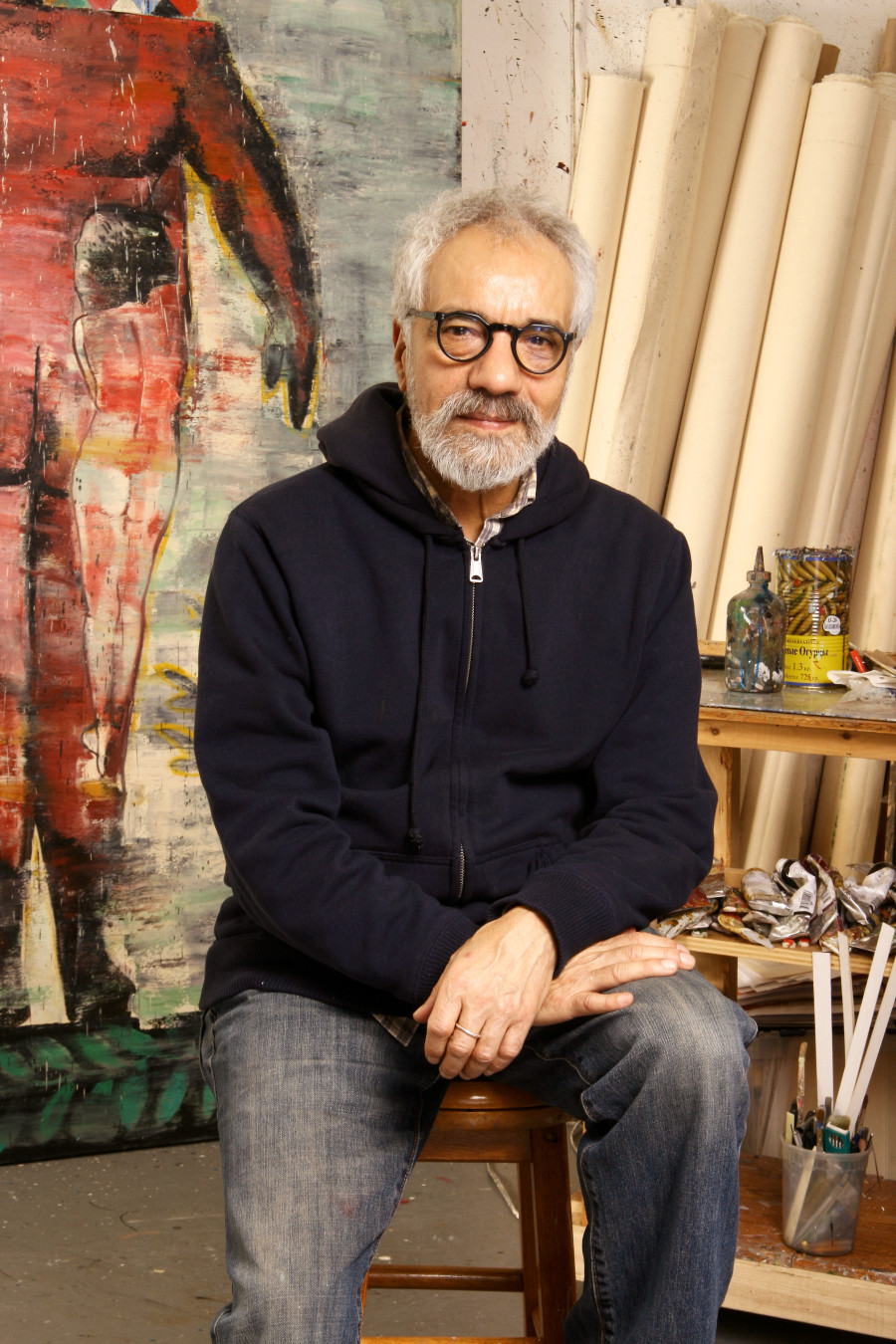 "NICKY NODJOUMI: CHASING THE BUTTERFLY AND OTHER RECENT PAINTINGS" opens at Taymour Grahne on September 7 and runs until October 23, 2013.