When you take a walk down the street and see a pile of leaves all bundled up, you probably see just a bunch of trash, but Nicole Dextras might see a "Weedrobe."

Dextras is an artist in Vancouver, B.C., who is showing that leftover leaves and plants can be a fertile ground for the imagination.

For the past six years, she has taken the native plants of the Pacific Northwest and turned them into elaborate dresses she calls "Weedrobes."

The dresses are beautiful, but Dextras has more than a pretty picture in mind. Her plant-based apparel is designed to confront important environmental concerns.

"I've had an ongoing interest in environmental art, and working in the theater as a clothes designer opened me up to the idea that the way people dress affects their psychology," Dextras told AOL Weird News. "I want these dresses to open a dialogue to people about where their clothes come from."

Then she photographs the green garment being worn in a landscaped urban setting to emphasize the impact of humans on the area.

Next, she has her dress model interact with spectators.

"I have her ask people questions about the labels they are wearing," Dextras said.

Finally, Dextras installs the garment in a garden or park so it can decompose over time.

"This is very important," she said. "I grew up in Ontario and the passage of seasons is ingrained in me. It's so important to me that I dedicated myself to ephemeral materials."

Dextras first decided to branch out into this field of art one day while walking around Vancouver.

"A neighbor of mine had cut down some laurel leaves and bundled them and I thought it would be nice to do something with them," she said.

That inspired her first dress, and, since then, she tries to do others whenever time and weather permit.

"I can only do them in season, and the growing season is short up here," Dextras said. "I hope to do a lot of them this year."

The outfits are not exactly made for lounging around the house.

"They are very restrictive," Dextras admitted. "I have to make them in parts. But I am trying to make them easier to wear."

She has learned some lessons since making her first outfits.

"My first dress looked good on the mannequin, but wasn't strong enough to actually wear," she said. "Now, I make a structure underneath, such as with thorns or willow branches."

Although Dextras' work is meant to promote the use of more natural materials in clothes, she admits adapting her designs for everyday wear won't be practical.

"For instance, cabbage leaves are uncomfortable and they wilt," she said.

It takes a special model to wear one of Dextras' outfits, not only because they can be cumbersome, but also because the model is expected to engage spectators in conversation.

Dextras has used a few in the six years of doing Weedrobes, but believes she's found a true collaborator in Nita Bowerman.

"She's willing to take on a persona and she enjoys wearing them," Dextras said.

The love fest is mutual, according to Bowerman.

"I would say that the primary difference between Nicole's Weedrobes and other outfits is the sensory experience," Bowerman said. "Imagine a coat made of lilacs, how rich and fragrant the aroma. And rubbing your cheek against the collar, a massage of soft petals and nectar. [The outfits] engage the imagination and they also activate the body."

Bowerman says putting on one dress required her to crawl, not jump, through two hoops in the back of the skirt and dive up through the waist with her hands over her head. Not that she minded.

"It made physical the concept Nicole described to me about where this self-sustainable dress could go," she said. "Imagine, this sculptured skirt as garden and also as a tent, a place with food and shelter that you can bring with you."

Although Dextras has attracted international attention for her works, the temporary nature of her work has kept it based in Vancouver. However, she is excited about doing similar works in other cities around the world.

And while she is getting acclaim for her work in environmental art, she is not the only artist working in this genre.

"This is actually happening in Europe more than in Canada or the U.S.," Dextras said.

Still, she said, "there are less than a dozen people doing what I do and I think some are more concerned with getting a lot of hits on the Internet than really doing art."

Not that Dextras doesn't have concerns about her own work.

"I do worry sometimes that I make the dresses too beautiful and people just think they are cute," she said. 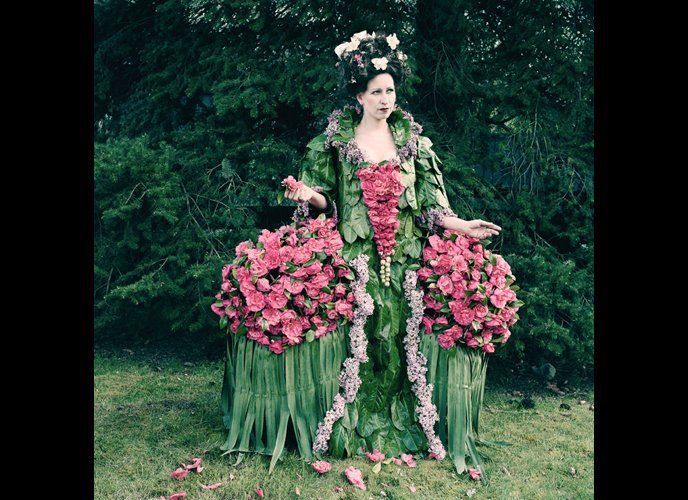 1 / 7
Canadian artist Nicole Dextras has made a name for herself in the field of environmental art by turning leaves and branches into beautiful outfits. This dress, Camellia Countessa," is a wearable garment made entirely from leaves, branches and flowers. The design is based on the French Pannier (basket) dress which were originally constructed from willow branches.