A powerful novel of love and loss and the reverberating effects of historical atrocities on our children, Great House by Nicole Krauss (Norton, $24.95) is a testimony to the relentless grip of memory on our present, a series of interconnected stories rendered with poise and striking clarity.

As she proved in her previous novel, the international bestseller The History of Love, Krauss is an astute and compassionate author. She cares for her characters, cares to probe deep, spend time navigating the emotional geography of each protagonist -- the old as well as the young -- to expose their most intimate conflicts, reflections and desires. 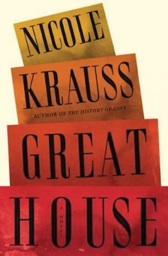 Great House brings to life the complex relationships of a solitary writer and an inherited desk, a father and his alienated son, a husband and his dying wife, and the suffocating hold a father, who is an antiques dealer, has on his son and daughter. Central to these stories is a massive desk owned by a Chilean poet who disappears at the hands of Pinochet's secret police. And always present, never forgotten, are the profound effects of the Holocaust, the way tragedy and loss shapes each character, and the plight of Israeli families -- those who lose children in war, and those who live in perpetual fear of the ring of a doorbell that might herald devastating news.

"Your Honor, in the winter of 1972 R and I broke up," begins the first sentence of "Great House," situating the reader in a courtroom. The speaker, a writer, is explaining how she came to own, and eventually lose, the mysterious, wooden desk with 19 drawers, "some small and some large, whose odd number and strange array, I realized now, on the cusp of their being suddenly taken from me, had come to signify a kind of guiding if mysterious order in my life, an order that, when my work was going well, took on an almost mystical quality."

After years, a woman who maintains that she is the poet's daughter appears to claim the desk, disrupting the writer's life; so much so that she decides to lock her apartment and travel to Jerusalem, perhaps to claim the desk back, although she denies it. The reason the protagonist is in court will be revealed much later; in the meantime, being led by a sure-penned author, we settle back and enjoy the journey.

In Israel, a father is reminiscing about his estranged son, Dov, a barrister, returned home from England to sit shiva for his mother. Krauss reveals a deep understanding of the human psyche and of a father's pain, anger, longing and envy in the old man who, in the little time left to him, aches to mend his relationship with his son -- even if father and son might not possess the right tools to do so. Always present is the all-consuming fear of losing his sons to war: "It was the doorbell we feared the most. Across the street they arrived at the Biletskis' to say that Itzhak, little Itzy whom you and Uri played with as children, had been killed in the Golan."

Across the oceans, in England, the doorbell rings to announce a different kind of trouble: at the door is a stranger the husband suspects of being his wife's lover, setting a series of incidents into motion that will unearth a far more disconcerting secret. And here, too, looms the presence of the mysterious desk that "overshadowed everything else like some sort of grotesque, threatening monster, clinging to most of one wall and bullying the other pathetic bits of furniture..." A desk that will someday reveal its own set of secrets.

In the meantime, a love affair is blooming "in the house in Belsize Park that [Yoav] shares with his sister, Leah." The house is wonderfully gothic, a significant character with eccentricities of its own, "a large and dilapidated brick Victorian... filled with darkly beautiful furniture that the father, a famous antiques dealer, kept there... the rooms were always changing, taking on the mysterious moods of houses and apartments whose owners had died, gone bankrupt, or simply decided to..." In the house in Belsize Park, under the austere shadow of their father, Yoav and Leah are "locked within the walls of their own family, and in the end it wasn't possible for them to belong to anyone else." Not unlike their father who, unable to free himself of the past, dedicates his life to reassembling his own father's study that was plundered by the Nazis -- an obsessed son who will not rest until every piece of furniture is sought, transported and arranged in its rightful place.

Once again, the doorbell rings. This time Weisz, the antiques dealer, is at the door:

"Forgive me for not calling in advance... There's something I'd like to discuss with you... A desk..."

To discover the fate of the desk, and whether the possessed Weisz succeeds in his quest, pick up Great House and read it, and once you have, circle around and read it once more to better appreciate the interconnected stories and doubly enjoy the magical prose and insight of an author at the top of her form.