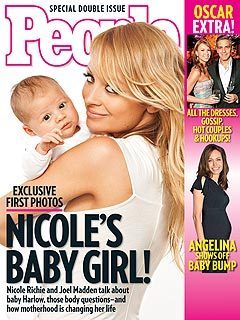 Her new daughter, Harlow Winter Kate, in her arms and her boyfriend, Joel Madden, by her side, Nicole Richie tells PEOPLE for its new cover story - on newsstands Friday - that when it comes to the changes she's experienced in the six weeks since the baby's arrival, "It's almost like I don't even remember what life was like before her. She gives life a whole new meaning and a whole new purpose."

And while Richie says, "I don't know" how long she was in labor, "because I don't know what time I actually went into labor, but I pushed for 10 minutes," Madden, 28, said of his daughter: "She came out and she was crying. The doctor goes, 'Well, it looks like you got a little girl!' " **** Nicole gave birth January 11

Nicole was dancing on banquettes 5 weeks after Harlow's birth